The Voice of Putney Swope

The revolution will be laughed at. 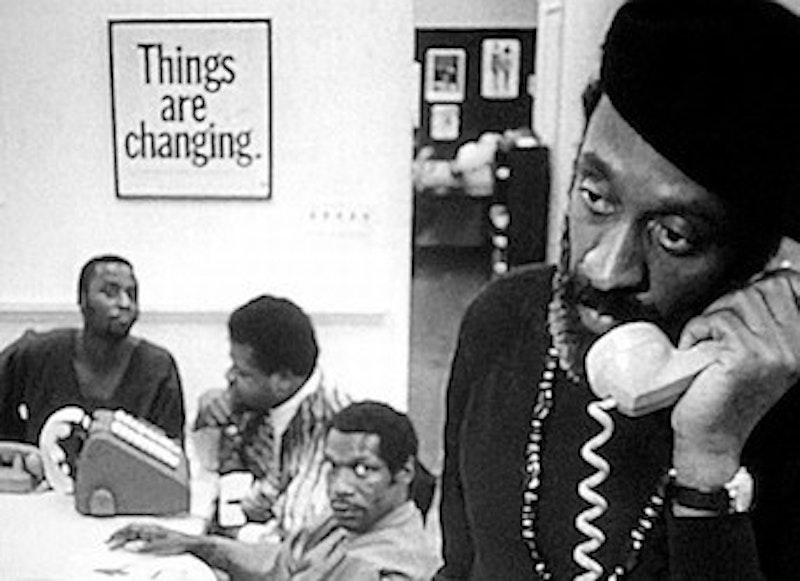 This is part of a series of posts on 1960s comedies. The previous post on Cat Ballou is here.

Robert Downey's Putney Swope (1969) is generally viewed today as one of the most innovative and radical films of the 1960s: an anarchic, groundbreaking assault on racism, capitalism, and Hollywood convention. Swope gleefully kicks the status quo—but in doing so, it inadvertently demonstrates that gleeful kicking isn't necessarily revolutionary. Without hope, a progressive critique curdles.

Putney Swope is not a narrative-driven movie, but such as it is, the plot sounds like a send-up of corporate America. The head of an advertising firm dies while addressing a meeting. The board votes on his replacement, and since no one can vote for themselves, they all vote for Putney Swope (Arnold Johnson), the one black executive, since they figure no one else will vote for him. Swope immediately changes the direction of the company, renaming it Truth and Soul, hiring black staff and management and refusing to take advertising accounts to market war toys or alcohol. The massive success of his innovative campaigns makes Swope a celebrity, and draws the ire of the President of the United States (Pepi Hermine) who tries to undermine and co-opt Swope.

Swope's advertisements are brilliant short films within a film. An amazing dreamy hippie psych folk duet pitch for acne cream features a white woman serenading her black boyfriend with the immortal lines, "You gave me a soul kiss/It sure was grand/You gave me a dry hump/Behind the hot dog stand." Another ad shows a woman gyrating to funk music for several minutes before she looks dead at the camera and declares, "You can't eat an air conditioner." Then she gyrates some more. The sequences pillory marketing's vacuous sexuality, decadent innocence and clumsy hipness. They're funny because they so perfectly capture the alternate world of marketing, in which reality is both heightened and flattened out, and everything you desire is both available and stupid.

Downey doesn't use this mode of hyperbolic banality just for the ads. It's how he presents virtually everything in the film, including Swope's transformation of the company. Capitalism is treated with dry disdain, but so is anti-capitalism, and anti-racism. Swope's new hires are caricature black revolutionaries, waving guns around, spouting profanity-laden attacks on the Man, having sex in the offices, and casually discriminating against white employees. The ironic twist at the end of the movie shows them eager to sell out for a cut. The revolutionaries are really just cash-hungry sycophants.

You could argue that this is meant as a parody of Hollywood's handling of black actors, and there's something to that. Swope goes from irrelevant token to revolutionary threat, nodding to black marginalization of the 1960s and to the vaunting black masculinity of Blaxploitation to come.

But while a film like Hollywood Shuffle takes pains to show the narrowness of Hollywood representations, Putney Swope is content to simply reproduce the tropes as it mocks them—which means it's never exactly clear that Downey realizes that there’s a difference between the tropes and reality. Is he undermining white representations? Or is he just having fun as a white person mocking black people?

The question is more pointed because Downey appropriates Putney Swope for himself. Arnold Johnson is cast as Putney Swope, but Downey chose to dub Swope's voice personally. As Swope, Downey speaks in a gruff, ultra-masculine, stereotypically black idiom, half-parody, half-tribute. The performance has queasy parallels with the black vocal references by white rock performers from Mick Jagger to Tom Waits. By taking over the main character, Downey turns his film into a kind of extended blackface skit, in which the director acts out a fantasy of himself as his own black star.

Downey casts himself as the one black man who doesn't sell out, effectively positioning himself, the white director, as the most authentic black person. The white man has to bring the black revolution—which means that the revolution doesn't look revolutionary after all. Downey satirizes both bloated white executives and cynical black revolutionaries, an even-handed both-sides approach which makes change seem pointless. The new boss is the same as the old boss. You can elect someone different, but he'll still speak with the same voice.

Downey pillories Madison Avenue, but doesn't offer any alternative. Advertising, in this world, is all there is, which means that Putney Swope may be best understood not just as a satire, but as the greatest meta-commercial for capitalism ever made. Truth and soul are just more marketing gimmicks. "Don't believe the hype" doesn't get you free of the flim-flam. It just helps you to sell yourself better than ever before.