Yet it misses exploration of the Internet’s really slimy side. B- 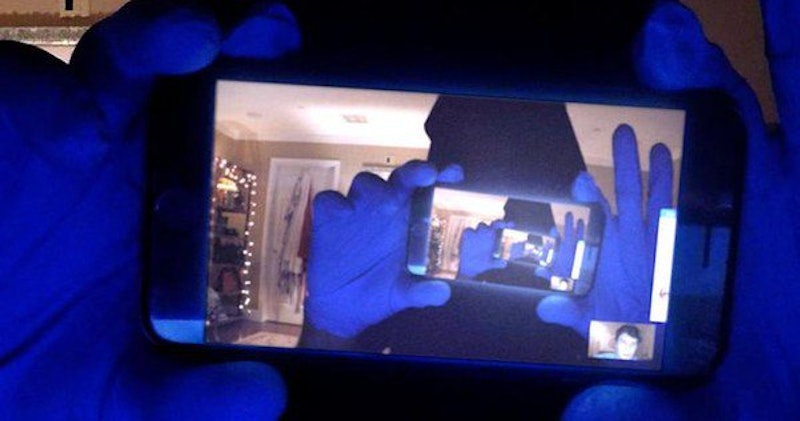 We’re by now fully accustomed to living significant chunks of our lives in front of computer screens, and movies are beginning to catch up. 2014’s Unfriended was one of the first “desktop films,” a variation on found footage that was set entirely on a computer screen, using applications like Skype, Spotify, and Facebook to tell a horror story. It was ingeniously put together and incredibly fun to watch, and since it was a success, it of course spawned a sequel. Now we have Unfriended: Dark Web, which is unconnected from the first save for the basic idea of a horror desktop film.

While the first Unfriended was a supernatural thriller about teens stalked by the Internet-bound ghost of their dead friend, Dark Web doesn’t have any paranormal elements. Rather, it’s like a modern-day version of The Net, that 1990s gem made entirely out of anxiety about the embryonic Internet. Worries about identity theft have been updated to fear of the Dark Net, Internet trolls and hackers. The young protagonists of the film stumble into this world when one of them opens up a laptop he pulled from a lost-and-found bin and discovers unsavory files on it… and then that the laptop’s owner is monitoring him and his friends, wants it back, and can pull off some spooky hacking stunts.

Dark Web feels like an adaptation of a creepypasta (modern-day campfire stories that are shared around the Internet) or of an alarmist chain email letter your older relatives may have shared with you. The film taps into very real fears around hacking and Internet surveillance, as well as the most depraved elements festering in the niche corners of the web. The fears are exaggerated or misplaced of course. Hackers are terrifying, but that’s because they can ruin your credit, get you fired or expose you to death threats, not because they may set up an elaborate game in order to murder you in your house. But the former fear is more abstract; Dark Web is more set on making all your less rational ideas concrete.

In this, it’s frequently effective. While Unfriended was a funhouse ride, Dark Web gets genuinely harrowing and sometimes plain unpleasant. It reflects their differing angles—Unfriended was a cautionary tale about Internet bullying getting turned back on its snotty perpetrators, while Dark Web is about innocent, even likable characters attacked by an evil underworld because of one person’s poor choice. Even the fact that the evil hackers’ plan is complete nonsense can’t totally shake the visceral effect of watching it in action. Still, in the same way that Unfriended whiffed what could have been an all-timer haunting ending in favor of a cheap jump scare, Dark Web misses out on a more disturbing exploration of the “dark internet” in its pursuit of thrills.

That pursuit also stretches the desktop aesthetic a bit farther than it may be able to go. While the first Unfriended was basically perfect in its cross-cutting between different apps and websites as a substitute for traditional editing, Dark Web sometimes breaks believability whenever its characters move outside their apartments and yet still somehow have some sort of camera on them. To the movie’s credit, this is part of its overall greater formal ambition. Rather than repeat the feats of its predecessor, it experiments even further with different messaging apps, video chat platforms, and even computer setting functions to tell its story. Though an imperfect follow-up, Unfriended: Dark Web is still a blast.