A better buddy comedy love letter to Oakland. B+ 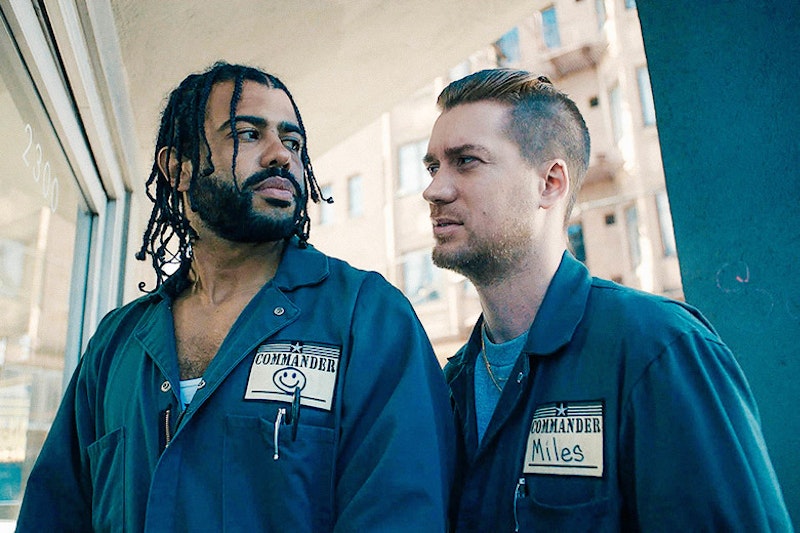 There's an Armageddon/Deep Impact, A Bug’s Life/Antz, The Illusionist/The Prestige, Olympus Has Fallen/White House Down situation going on in art house theaters right now. Isn’t there a term for this phenomenon? Or at least a Wikipedia article? Pretty sure I read one a while ago. Ah, OK: “twin films.” Two buddy comedy love letters to Oakland loaded with sociopolitical commentary and satire are out now: Sorry to Bother You and Blindspotting. They’re both great, but I worry that Blindspotting will be overlooked and overshadowed by Sorry to Bother You’s flash and ambition.

Blindspotting is the better film, modest as it may be. Sorry to Bother You had eyes that were bigger than its stomach: it tried to be four or five different movies, veering wildly from dystopian farce to rote romantic comedy to realist economic critique to sociopolitical satire to horror movie. It was a tonal disaster, and when I saw it in a packed house on opening weekend, it lost the audience about halfway through. It’s an ambitious and idiosyncratic movie, and that alone is admirable. But that doesn’t make it a successful movie. I think Sorry to Bother You had the potential to be a masterpiece, and just missed.

Blindspotting works on its own terms. The film follows Collin (Daveed Diggs) during the last three days of his probation. He works for a moving company with his best friend Miles (Rafael Casal), lives in a probation house, has to be in by 11p.m. and up at 6:25 a.m., and can’t get a job or a house most places because of his record. “Convicted felon” is a nonstarter on any application in rapidly gentrifying Oakland. Collin didn’t kill anyone—he served a year in prison for beating up a rude customer while working as a bouncer.

The guy was a tech bro, and throughout Blindspotting we see dozens of these Silicon Valley, “Cupertino types” around Oakland acting like they’ve lived there all their lives, buying $10 green juices and bragging about “purple drank” in their lavish homes at very sedate and lame parties. Trying to make it back home before curfew one night, Collin sees a white cop shoot an unarmed black man four times in the back. This is an unfortunately typical and unjustified murder, and the image of the wide-eyed cop looking at him and the crumpled corpse in his rearview mirror rattle through Collin’s mind for the rest of the film.

Whenever twin films happen, it’s natural to compare them. I’m glad both exist, but I’m surprised how many people swooned for Sorry to Bother You with no reservations, despite its failure to fully incorporate all the disparate worlds and voices it was in love with. Blindspotting is a competent movie about a tested friendship, a changing Oakland, and the tight rope walk a black man has to go through every day, whether it’s around the police, employers, or strangers on the street. It knows what it wants to be and succeeds without any fat or flashy stylistic detours.

And that’s why it won’t be remembered like Sorry to Bother You, an ambitious and admirable failure that will be talked about for years as one of the red-letter films of this decade. But Blindspotting still has the better sociopolitical critique because it pulls through in the end instead of going completely off the rails into Troma land.