The movie’s affection tempers its coarseness. B- 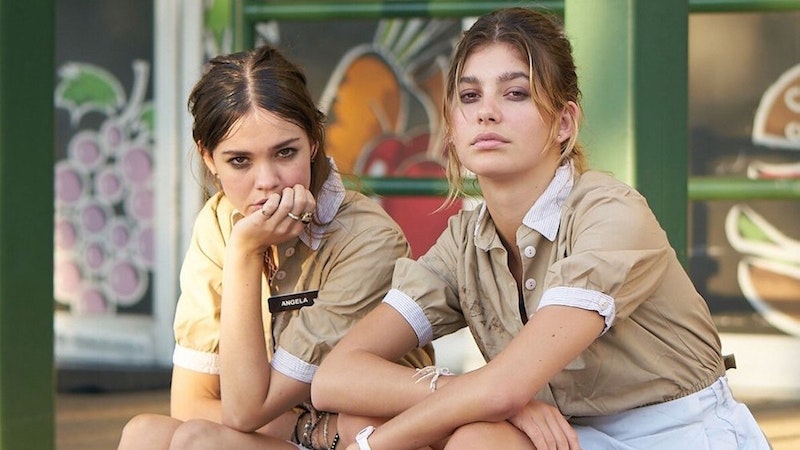 A paean to adolescent aimlessness that wrings lovingly base comedy out of economic insecurity, Never Goin’ Back is the under-the-radar buddy comedy to beat this summer. With luck, it’ll become a staple of late-night dorm room bonding times everywhere. And while the crude dialogue and proud toilet humor are impeccably constructed (the movie climaxes with an extended diarrhea gag), it also has a not-so-secret good heart within.

Plenty of comedies purport to be about friendship despite featuring characters who are only “friends” in the sense that they’re frequently in close proximity, with no palpable sense of camaraderie or history between them. But teenagers Angela (Maia Mitchell) and Jessie (Camila Morrone) have a BFF relationship that feels lived-in and real, from the ease with which they slouch together on the bus to their mutual panic when attempting to expel unwittingly consumed pot brownies from their systems. When one misadventure sends them to jail for a few days, they reach out between the bars of their cells to hold hands as they go to sleep. The movie’s affection tempers its coarseness, and vice-versa.

Both high school drop-outs, Angela and Jessie struggle to make ends meet while sharing a small house with Jessie’s wannabe drug dealer brother Dustin (Joel Allen). Impulsively booking a birthday beach trip to Galveston imperils the month’s rent, but they figure they can cover it with a few extra shifts at the crappy steakhouse they work at. Then the house is robbed. Then they go to jail. Then it turns out Dustin lost all his rent money on an abortive drug deal. And things only get more chaotic from there.

Writer/director Augustine Frizzell captures a string of authentic details within the film’s sprawling Texas milieu and the social spheres of aimless young people. The story is one long meander, though not without clever setups and payoffs, and Frizzell avoids the common first-time indie feature trap of making thematic aimlessness into structural aimlessness. There’s exciting promise here, both from the filmmaker and the two leads.

A stoner picaresque film that keeps itself to a trim 85 minutes and thus doesn’t wear out its welcome, Never Goin’ Back is cartoonish but built out of very real, very harrowing concerns around having no money when you’re young. The movie suggests that the only reason anyone survives such periods is that the physical inability to think too far into the future that comes with youth makes it bearable. That and having a friend to ride things out with.