Against all odds, Bo Burnham’s directorial debut is immensely moving. A 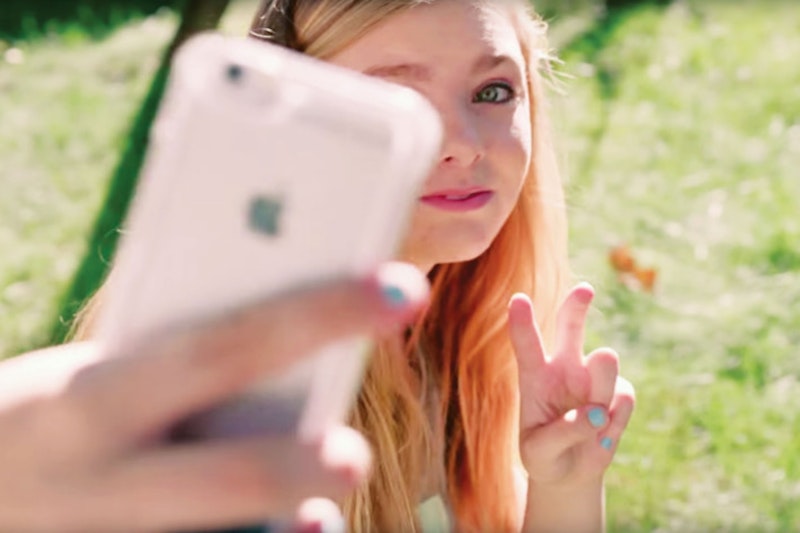 “She’s four years younger than us, she’s wired differently.” A little more than halfway into Eighth Grade, comedian Bo Burnham’s directorial debut, the main character is invited by her high school shadow buddy, a senior, to hang out at the mall with some of her other senior friends. They grill her: “We didn’t have Twitter in middle school. When did you get Snapchat?” Kayla (Elsie Fisher) looks down and says, “Fifth grade.” All of them are shocked except her saint of a shadow buddy, Riley (Daniel Zolghadri), who consistently sticks up for Kayla and allays her fear and nervousness and marks the point when Eighth Grade becomes an exceptional piece of work.

The movie opens with an extreme close-up of Kayla’s face as she records a video for YouTube. The camera slowly pulls back as she stumbles through her notes and offers encouragement for all her similarly aged and insecure viewers. But she has none—as Kayla scrolls through her channel, we see that most of her videos have half a dozen views at most; some have none. She’s speaking to nobody; an outcast at school slighted by kids like Kennedy, the archetypal stuck-up mean girl. A forced invitation to Kennedy’s pool party ends predictably: alienated and embarrassed, Kayla begs her dad to pick her up an hour early. She stares at Aiden, the boy with “the prettiest eyes,” and meets Gabe, an endearing, nerdy, but outgoing outcast.

Up until Kayla visits high school and is guided by Riley, Eighth Grade hits a lot of familiar posts for the genre: Kayla wanders the halls of her middle school alone and adrift, her dad struggles to communicate with his daughter, he walks in on her about to practice oral sex on a banana. As far as what it’s like to be an eighth grader in 2018, there’s the smartphone and social media stuff you’d expect (“No one uses Facebook anymore, mom”), but there’s also an incredibly sad section where the whole middle school runs through an active shooter drill. One of the teachers stalks the halls with a plastic machine gun as all the students line up against the lockers, and eventually hide under desks where they make small talk and flirt with each other, as casual as a fire drill.

Burnham doesn’t lean on any of the heavy stuff anymore than he needs to: the active shooter drill, as horrifying as it is, is a fact of life for students now. Kayla’s mom is absent, and we never learn what happened, other than one line toward the end from her dad about being scared “when mom left.” For once, a parent’s absence isn’t milked for dramatic effect or easy emotional points. Kayla isn’t humiliated by leaked nudes or a best friend turned beast or a love letter left in the wrong place: when she’s in a precarious situation with a boy, his shirt already off after starting a game of Truth or Dare, she stands her ground and refuses to play along. Dejected nevertheless, she asks her dad to help her burn a box of mementos. What follows is one of the most moving parent-to-child speeches I’ve ever seen, up there with the climax of Call Me By Your Name. It’s a stunning scene, and the rest of the movie floats on, Kayla’s courage and dignity affirmed.

I can’t stand most autobiographical coming of age movies that are merely vehicles to show off how cool and underappreciated the director was when he was a kid (20th Century Women, Rushmore, Murmur of the Heart), so you’d think a 27-year-old man writing a directing a movie about an eighth grade girl would be even more clueless and embarrassing. Not the case here: Elsie Fisher’s performance as Kayla is one of the most moving and impressive I’ve seen this decade, and Burnham’s script is deft and subtle, avoiding clichés and hitting all the right notes as it moves into its quiet and intense second half. I think it’s an astonishing movie, driven largely by Elsie Fisher, and further evidence that comedians are often better filmmakers than comedians.