The plot’s hopelessly convoluted, but that hardly matters. B+ 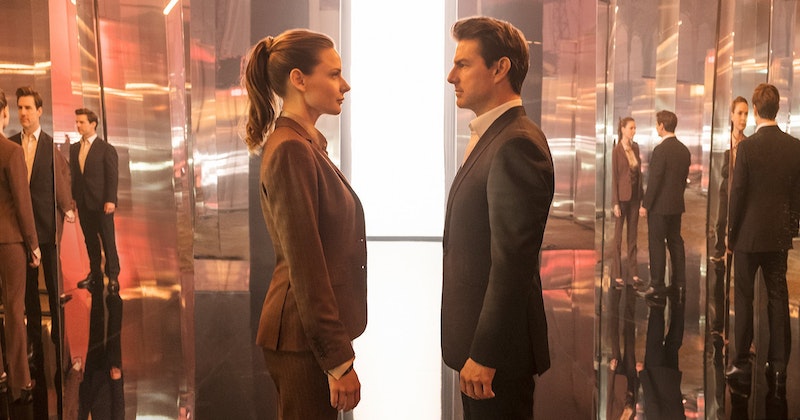 The sixth film, Mission: Impossible—Fallout, stars the 56-year-old Tom Cruise as Ethan Hunt, the American secret agent who has spent nearly a quarter century engaging in globetrotting intrigue, most of it involving elaborate, impressive stunts. Cruise doesn’t show his age in the slightest, and never seems out of place engaging in fights with men much younger (and taller) than himself, whether they’re hanging from a helicopter, jumping out of a plane or engaging in fisticuffs in a men’s bathroom.

While the first five Mission: Impossible films all had different directors, Fallout features a repeater for the first time, with Christopher McQuarrie (who also directed Cruise is the first Jack Reacher movie, the one that was good) returning as writer and director. Fallout feels more like a direct sequel to 2011’s Rogue Nation, directly continuing the plot of that movie and even bringing back one of its main villains, Sean Harris’ Solomon Lane.

The plot concerns the efforts of Cruise’s Ethan Hunt and his team (now down to just Simon Pegg and Ving Rhames) to stop the efforts of a mysterious, nihilistic terrorist, who has written an apocalyptic, Steve Bannon-like manifesto about the necessity of massive destruction. Solomon Lane still figures in the plot as a prisoner who’s a pawn among various governments, while Alec Baldwin and Angela Bassett return as rival bureaucrats.

The key new edition is Henry Cavill, as an agent at loggerheads with Cruise, and not only does he show more personality than he ever got to as Superman, but we finally see his mustache that was edited out of last year’s Justice League. Also still around is Ilsa Faust (Rebecca Ferguson), the spy who was the breakout of the 2011 film.

Fallout’s one huge strength is that the action is consistently riveting. The film leapfrogs from Belfast to Paris to London to the mountains of Kashmir, and throughout we get about seven different major action set pieces, the best of which is a two-part, multi-faceted chase scene through Paris. Other highlights include a well-executed fight in a bathroom, and the final sequence involving a pair of helicopters.

The action is all clear and tightly shot, and if you’re fan of Cruise’s climb up that Dubai skyscraper in the best film of the series, Brad Bird’s 2011 Ghost Protocol, you’re in luck—there are a lot more scenes of Cruise climbing. And, as usual with Cruise, he does a lot of running.

The film’s also creative with a few well-worn conceits. Everyone’s tired of action movies, especially the ones involving disasters, using CNN footage to commentate on the action. This one has the best subversion of that ever, including a dynamite cameo by Wolf Blitzer. And while the trope of good guys cutting wires on a bomb while a digital clock counts down how much time is left until it blows up has been in about 500 movies before, Fallout changes it up in a couple of ways, including making one of the clocks analog.

However, the film’s weak link is one that it shares with Brian De Palma’s original Mission: Impossible from 1996: the plot is convoluted, with betrayal upon betrayal and plot twist upon plot twist, to the point where it’s difficult for anything to have stakes when they keep changing every 10 minutes. The action is impressive enough to mostly keep this problem at bay, and the third act is relatively straightforward and still pretty thrilling.

How long can these movies continue? You have to think the series will eventually go the way of James Bond and put another actor in the Ethan Hunt role, or possibly go back to the premise of the original series and make it about a team. But despite the age of the premise—and its leading man—Mission: Impossible remains the best action franchise going.