The Political Incorrectness of John Wayne 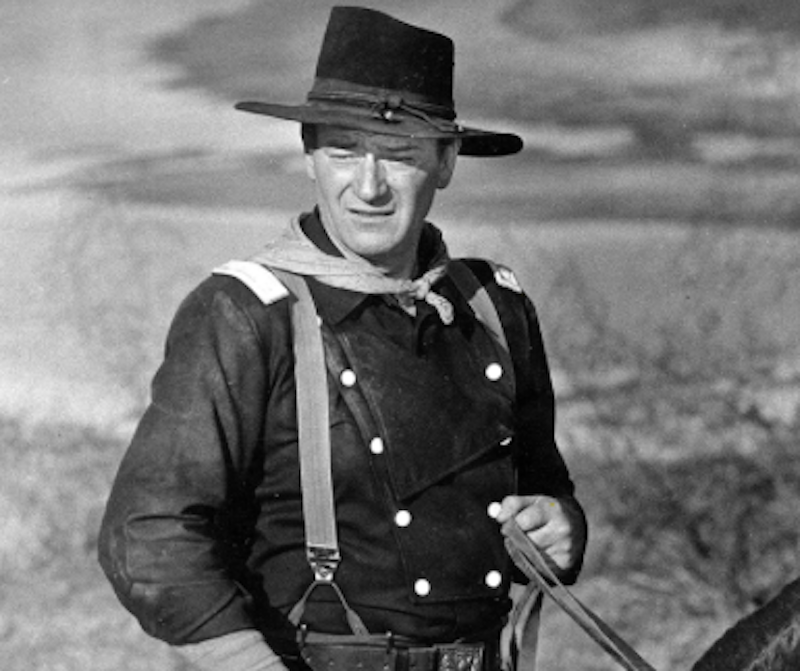 John Wayne dominated movie screens for half a century. He played cowboys, soldiers, hunters and boxers. He was a tough guy, a man’s man, an All-American hero who lived by his own moral code and let his actions speak louder than words. His favorite quote was one from Theodore Roosevelt: “If you’ve got them by the balls, their hearts and minds will follow.”

Wayne symbolized a macho, militaristic view of America. He embodied the “Make America Great Again” ethos, a time when life seemed simpler. His life was filled with contradictions. He embraced ultra-patriotism but avoided military service. He railed against government interference in private lives but took credit for helping the government rid Hollywood of communist interlopers.

Wayne’s persona was carefully calculated. His real name was Marion Morrison. His trademark swagger was developed with the help of Wyatt Earp and actor Tom Mix. He was a registered Democrat and supporter of Franklin Roosevelt until realizing his career would improve if he became a Republican.

Wayne’s big break came when he met director John Ford. Ford and Wayne developed a mentor/protégé relationship. They made 23 films together including the classics Stagecoach (1939), The Searchers (1956) and The Man Who Shot Liberty Valance (1962). Ford molded Wayne into a movie star, often insulting him in the process as when he told Wayne, “Can’t you walk instead of skipping like a goddamn fairy?”

When America entered World War II, Wayne was 34 and married with two kids. He claimed he wanted to serve in the military but when a recruiting letter arrived from the OSS, he didn’t respond. He later said his wife hid the letter from him adding that Republic Pictures threatened to sue him if he entered the military and didn’t fulfill his contract (a dubious claim). In reality, his career was taking off and he wanted to make money.

Years later he tried justifying his avoidance of service saying, “I didn’t feel I could go in as a private. I felt I could do more good going around on tours and things.” He said he was thinking of the young recruits who looked up to him. “I was America to them. They took their sweethearts to Saturday matinees and held hands over a Wayne Western. So I wore a big hat and I thought it was better than taking any position in the military.”

Wayne made popular war movies like Flying Tigers and Back To Bataan but Ford called him a “draft dodger.” During production on They Were Expendable (1945), Ford chided Wayne in front of the crew saying, “Duke, can’t you manage a salute that at least looks like you’ve been in the service.”

As the war progressed, Wayne shifted political allegiance to the right. In 1944 he helped form the Motion Picture Alliance for the Preservation of American Ideals. The group was fervently anti-communist and worked with the House Un-American Activities Committee (HUAC) to enforce the Blacklist. Actors like Humphrey Bogart, Lauren Bacall and Gene Kelly excoriated Wayne for helping ruin the lives of blacklisted filmmakers. Wayne was unapologetic saying, “We were just good Americans and we demanded the right to speak our minds. After all, the Communists in Hollywood were speaking theirs.”

Wayne viewed America as exceptional and built on a bedrock of rugged independence and moral superiority. His movie roles echoed his off screen persona. In 1952, he played a HUAC investigator hunting communists in the film Big Jim McLain. In The Searchers (1956), Wayne played Ethan Edwards, a stubborn, angry man who viewed Indians as inhuman savages with a genetic predisposition for duplicity.

In the novel that inspired The Searchers, author Alan LeMay wrote, “I see now why the Comanches murder our women when they raid, why they brain our babies. It’s so we won’t breed. They want us off the earth. I understand because that’s what I want for them. I want them dead. All of them. I want them cleaned off the face of the world.”

Though the dialogue didn’t survive The Searchers screenplay, the spirit of the words filled every frame. White cowboys were good. Dark-skinned Indians were evil. John Ford’s son Pat, who produced and co-wrote The Searchers said, “We portrayed the Comanches with as much barbarism and savagery as possible. Their villages are scenes of utter squalor. They were poor, filthy and smelled bad.”

Western films weren’t always this way. In the silent days, Indians were portrayed as noble savages. In the 1908 film The Bank Robbery, Indians helped white lawmen capture thieves with their innate tracking skills. Then D.W. Griffith made a 1913 film called The Battle at Elderbush. Griffith portrayed Indians as barbarians who drunkenly attacked white settlers, raped white women and crushed the heads of innocent babies. This narrative clicked with white audiences and the Cowboy and Indian movie stereotype was born.

In Stagecoach, Apaches were painted as murderers and rapists. For a white woman to be captured by an Indian was a fate worse than death. As Wayne says in The Searchers, it’s better to “put a bullet in the brain” of a white girl abducted by Indians than to let her return to white society.

In a 1972 interview with Film Comment, Wayne said, “We treated them [Indians] as if they had the same moral code that the American people wish every American had and we gave them a nobility that was worthy of a king, when actually we know they were savage, treacherous, competent warriors with little or no pity or mercy.”

In a now infamous 1971 Playboy interview, Wayne said, “I don’t feel we did wrong in taking this great country away from them. It was just a matter of survival. There were great numbers of people who needed new land, and the Indians were selfishly trying to keep it for themselves.” In that same Playboy interview, Wayne was asked about counter-culture black activist Angela Davis. He said, “With a lot of blacks, there’s quite a bit of resentment along with their dissent and possibly rightfully so. But we can’t all of a sudden get down on our knees and turn everything over to the leadership of the blacks. I believe in white supremacy until the blacks are educated to a point of responsibility. I don’t believe in giving authority and positions of leadership and judgment to irresponsible people.”

On a recent Saturday Night Live, host Bill Burr decried efforts to “cancel John Wayne” saying the actor was simply a product of an earlier, less informed generation. At the time Wayne made his Playboy remarks, Martin Luther King Jr. had been dead three years. Clearly Wayne was responding to the advances made by African-Americans through civil rights legislation.

When Orange County recently discussed removing Wayne’s name from their airport, President Trump tweeted that Democrats were exhibiting “incredible stupidity.” Trump recognized the Wayne myth at the heart of MAGA culture. Like Trump, Wayne was enraged by black protests.

Wayne’s son Ethan defended his father’s remarks. “Any discussion of removing his name from the airport should include the full picture of John Wayne and not be based on a single outlier interview from half a century ago.” The full picture of John Wayne hasn’t aged well. He was quick to see threats wherever he looked. In the 1950s it was communists. In the 1960s it was blacks. In the 1970s it was liberals. No doubt today it would be Antifa.