Bloody Nose, Empty Pockets is an extraordinary film about the last day at a bar in Las Vegas. A 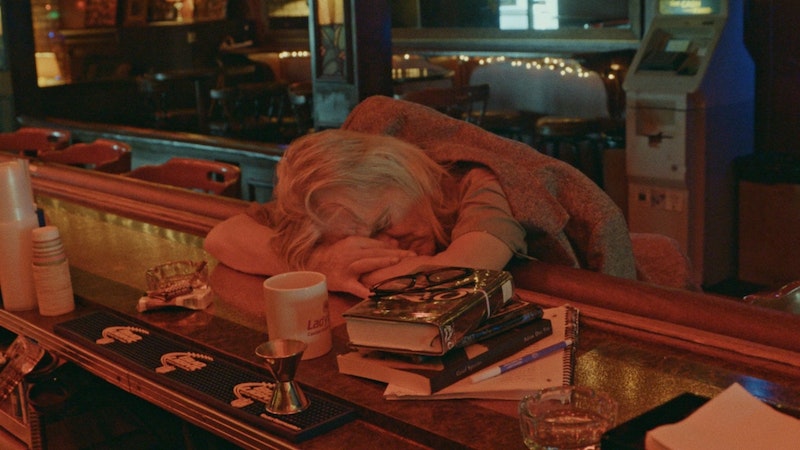 “When nobody don’t want your ass, it’s a place you can go. And feel like family.” As the 2020s begin, Roaring 20s in Las Vegas closes. Actually, they closed in November 2018, but a new film by the Ross Brothers—Bloody Nose, Empty Pockets—premiered this year at Sundance and is now available to rent and buy via Amazon Prime. This is a 99-cent rental for one of the best films I’ve seen all year. Bloody Nose, Empty Pockets is about a bar’s last day and the goodbye party thrown and attended by regulars. This was a watering hole in a strip mall nowhere near the Vegas seen in the distance or on the TV inside. Besides the novelty of being able to smoke inside (the envy I feel), and the bleached hair and skin so common on the West Coast, this could be any bar in America. These people have nowhere to go after Roaring 20s closes, and some of them say as much.

The Ross Brothers—who produced, shot, and directed the film, while Bill Ross IV edited it—keep like good flies on the wall, unafraid to let themselves to be seen for moments in mirrors and in TV and jukebox reflections. The extent to which Bloody Nose, Empty Pockets is staged doesn’t matter to me: in fact, it was shot on a soundstage in Louisiana, not Las Vegas. No matter. Michael Martin, an actor, is one of the regulars and he anchors the bar as well as the film—the amiable bartender of the first few hours of the day disappears without notice, replaced by the owner, who looks after her teenage son periodically in the back, making sure he’s not drinking or doing drugs. But before that big kind bear bartender leaves, he picks up an acoustic guitar and sings Roy Orbison’s “Crying,” with Martin joining in, eyes closed and focused on something we can never know.

The last day at Roaring 20s is far from a blowout or pity party: most of it looks like a normal day in a bar, with casual kisses and inside jokes and long memories shared between people who’ve been drinking and smoking together in the same room for years. Most of them have nowhere else to go, and it makes most of them cry. Two veterans commiserate at one point, furious that the United States and most people in it don’t care about them and do absolutely nothing for them once they’ve served. Nothing—you don’t have to be a veteran to it’s inexcusable and true.

An overlooked consequence of the COVID quarantine has been the almost assured destruction of every other type of “home” like this that hadn’t already closed. I don’t drink, and I stopped going out regularly years ago, but before March 2020, I went to the movies four or five times a week. Monday night revivals at seven at The Charles, I saw a crew of regulars and talked about movies as much as we could for the 25 minutes before and after the show. Besides those I was already friends with, I’ve no idea where they are. I hope The Devil is a Woman doesn’t end up being the last movie I saw at The Charles.

The Ross Brothers use dazzling close-ups of objects in the bar as transitions and interstitials, turning neon signs and jukeboxes into starry nights and kaleidoscopes of reds, yellows, greens, and blues. Colors leak and spill out as people walk in and out of the bar, outdoors either blown out or pitch black. Roaring 20s feels very cozy despite containing a dozen alcoholics who have, in their own words, fucked up their own lives and probably sent others to Al-Anon. The most unlikable person in the bar does the pathetic “Let’s go outside” bit with someone else hours after telling Martin the older man’s generation “fucked everything up for us,” and when Martin asks the man to elaborate, he can’t. Luckily he gets kicked out after the fight challenge.

Others are younger, not yet weathered and worn: Michael pulls a younger guy down onto the couch to give him his life lessons, the kind of speech familiar to anyone who’s spent time around alcoholics: “You’re still young. You don’t have to do the things I did. You’re still a musician. You shouldn’t be in here.” The younger guy laughs it off, caught off guard by Michael’s sincerity and sentimentality. He says he won’t come back to Roaring 20s. The joke is lost on Michael, who replies: “Good, that’s a start. Don’t come back to this bar. And don’t go into another one.”