American Selfie: One Nation Shoots Itself is a jejune and empty-headed documentary by Alexandra Pelosi. C- 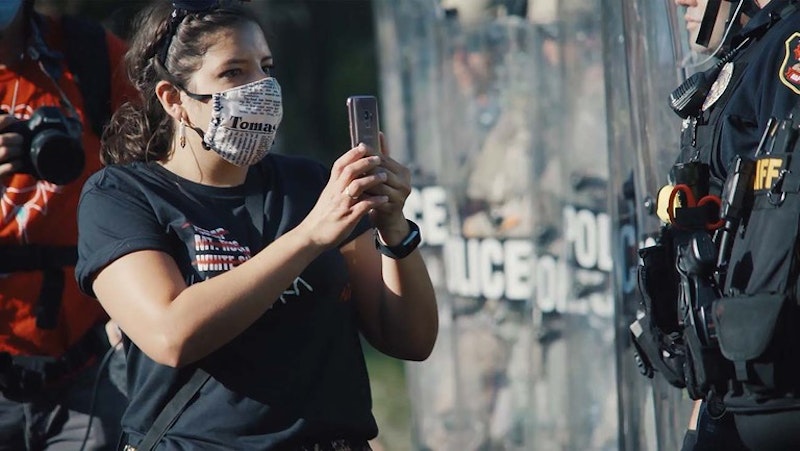 Alexandra Pelosi is a relatively prolific documentary filmmaker, and she’s also the daughter of House Speaker Nancy Pelosi. You might think, based on those facts, that the younger Pelosi would make films that reinforce or extol her mother's political worldview. But she doesn’t. Instead, she directs documentaries that explore the American condition, mostly by aiming the camera at people who say outrageous things. Her films, while occasionally illuminating, don't offer much of a point of view.

That's the specific problem with her latest film, American Selfie: One Nation Shoots Itself, which debuted last week on Showtime, in association with MTV Films. The film features Alexandra Pelosi, for a roughly one-year period between the autumn seasons of 2019 and 2020, traveling America with a crew and filming various events. We’re treated to the early days of the presidential campaign, trouble at the Mexican border, the beginning of the pandemic, the anti-lockdown protests, and eventually the George Floyd uprising.

In jumping among these very recent events, American Selfie resembles the structure of Borat 2, except without Borat, or any laughs. Pelosi doesn't show us anything we haven't seen before. Aside from the daily drumbeat of the news, there have been several already about 2020—Alex Gibney's Totally Under Control clearly the best of them—and many more sure to come.

Most of the places Pelosi goes, whether it's the 2019 Trump rally in downtown Minneapolis that ended with a pile of burning MAGA hats, or the "reopen" protests months later, most of the film's segments end with people on opposite sides screaming at one another. It's something that's happening in America these days, but we all know that by now.

The closest thing the film has to a thesis statement comes in the early going, when Pelosi first films young women taking selfies, and later shoots a line of people lining up to buy the newest iPhone in Chicago. Pelosi first posits how wasteful it is to buy a new smartphone every year, before sneeringly asking those in line if they'd be attending the climate change march going on in the same city later that day.

It’s similar to the smug, anti-tech hectoring of the recent Netflix documentary The Social Dilemma. We're supposed to buy into the well-worn notion that the relatively benign act of taking selfies is terrible, and that we're not only wrong to be buried in our phones all the time, but that doing so is contributing to the destruction of the planet.

Except that the entire second half of the film is about the George Floyd protests, which began with… a young woman filming Floyd's murder with a smartphone. In the weeks that followed, hundreds of instances of police abuses were captured with smartphones too. I understand that Pelosi didn't end up making the movie she expected to, which is often the case when it comes to documentaries. But it would’ve been wise to leave the weird anti-smartphone agenda on the cutting room floor.

My other complaint is Pelosi's condescension. She points the camera at the dumbest, most ridiculous people she can find, asks them leading questions, and leaves it all in the film. She did this as part of a Bill Maher segment, back in 2012, when she visited a group of toothless rednecks in Mississippi, and when the segment was criticized, she returned with a similar segment a week later with a visit to a welfare office in New York City. Both ends of it entailed a wealthy filmmaker contemptuously mocking poor people, for the pleasure of a well-off audience.

It’s not difficult or shocking to go to a Trump rally, find someone in full MAGA costume, shove a microphone in their face, and wait for the racist invective to flow. It’s never illuminating, but we really don’t need it from a documentary after four years of every TV network doing the same thing on a semi-weekly basis. Luckily, it appears we won’t be seeing it ever again.