Fact and Fiction In The Queen's Gambit

It brings back memories of Bobby Fischer. 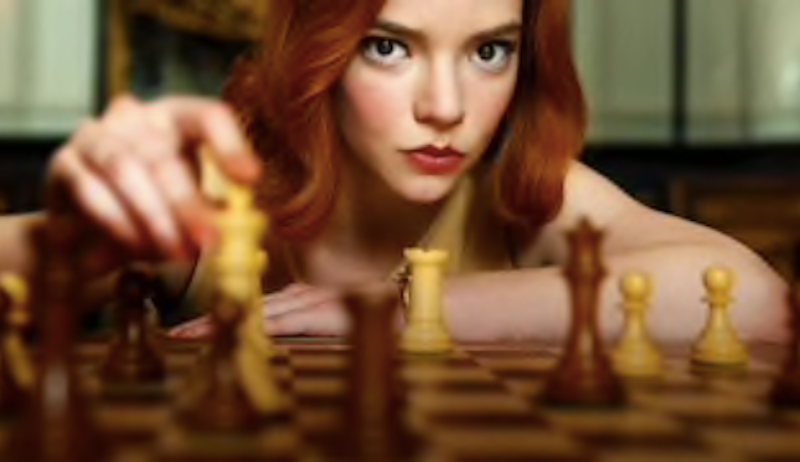 The Queen’s Gambit, a newish, buzzy Netflix series about a young female chess genius who against all odds goes to Russia and defeats the world champion, gets plenty right about the game, which is to be expected from a production that had access to the insights of former world champion Gary Kasparov. The show succeeds in conveying the obsessiveness the game inspires, and it captures details like the shabby trappings of even some high-level American chess tournaments in the 1960s, the era it's set in.

The program's creators depict real games from notable matches played around that time, a granular detail that’ll be lost on all but the most fervent students. But there are some verisimilitude misfires you won't read about in the glowing reviews the seven-episode show has received. It isn’t surprising, given that few critics know the game well enough to spot them. That's not to say that the story's discredited, however. Dramatic license, within reasonable limits, is allowed.

The least credible part of the story is the twin addictions—to both alcohol and tranquilizers—the protagonist, Beth Harmon (played by saucer-eyed Anya Taylor-Joy) struggles with. The chess prodigy gets hooked on pills handed out at the orphanage she was sent to after her mother died, but there's no way that she could’ve risen so quickly in the chess ranks at such a young age with her mind fogged by chemicals, even though she entertains the delusion that the drugs enhance her creativity. This is the rationale of an addict. But chess tournaments don’t resemble Woodstock, where Jimi Hendrix was said to have performed brilliantly under the influence of LSD in 1969. As for the booze that she later turns to, that would’ve made her stardom even more unlikely.

Harmon speaks with her opponents during some of her tournament games, but this simply doesn’t happen. Chess competitions are silent affairs, as dictated by the rules. Moreover, the players move their pieces much faster in the fictional version (except when they're playing speed chess) than in reality, but for dramatic purposes the snail's pace of a typical chess game needs to be sped up for the camera.

Viewers have wondered if The Queen's Gambit is based on a true story. The answer is no—it's an adaptation of Walter Tevis' same-titled 1983 novel. Tevis had a medically-induced drug dependency as a youth, which is where the pills came into his novel. There's also been speculation over whether the Harmon character was modeled after a real-life chess player. While one of the series' characters compares Harmon to 19th-century American chess legend Paul Morphy, who was found dead in his bathtub at 47, the champion she most resembles is fellow high school dropout Bobby Fischer, who, as it happened, was dismissive of female players ("They are not so smart) in his usual obnoxious manner. But the chauvinism of the youngest grandmaster in chess history was the norm in the chess world at the time, so Beth Harmon had to struggle with sexism at tournaments from a young age. In fact, the World Chess Championship was open to men only until Susan Polgar successfully fought her way into the tournament in 1986.

Fischer and Harmon were loners who had to overcome difficult childhood challenges. They both studied Russian to prepare for their eventual showdowns with Russians. Fischer cut his own mother out of his life as a teenager and was living alone when he was 16. He once talked about how he had to "get rid of her." Harmon, on the other hand, had a loving relationship with the mother who adopted her. Her character has some of Fischer's rough edges smoothed away, but she still retains his cockiness, especially in her dismissiveness towards the many adversaries she destroys with a minimum of moves and effort. Confidence is one thing Harmon had from the beginning in spades.

Stylistically, Harmon resembles Fischer in the boldness and creativity of her game, which stood out in contrast with accomplished players of her era who relied instead on memorizing a vast catalog of moves in response to their opponent's moves. Fischer once said, "I hate the Russians... They play for draws with each other but play to win against the Western masters. Draws make for dull chess, wins make for fighting chess." Harmon was never interested in draws either, and they're nearly non-existent in her story.

The Queen's Gambit doesn't play up the Cold War backstory angle, unlike what the American media did in covering Fischer's dramatic triumph over Boris Spassky to win the World Chess Championship in 1972 in Reykjavik, Iceland in the so-called Match of the Century. Fischer was widely viewed in the U.S. as a proxy warrior for Western values taking on the Communists he accused of unfair tactics. He complained bitterly about match conditions, even forfeiting the second game in the finals against Spassky because his demands weren't met, which put him down 0-2 right off the bat.

Spassky felt heavy pressure within Russia to strike a blow against capitalism by winning. Harmon, however, carried no banners to Moscow. There was so little interest in her that she couldn't get the U.S. State Department to sponsor her trip, but when she arrives she courts no controversy and is received warmly by the Russian people. When Harmon defeats the world number one, Borgov, he's a class act, congratulating her warmly. While Fischer traveled to Reykjavik with an entourage, Harmon went alone to Moscow, a story element that makes her eventual victory somewhat less believable, especially considering the fact that Borgov was surrounded by grandmasters assisting him in his daily preparations.

Bobby Fischer dropped out of sight for a couple of decades after winning in Reykjavik as he began his descent into madness. The Brooklyn-raised chess genius, while a supreme master within the 64-squares format, was much less successful as a human being. We don't know what happens to Beth Harmon after her life's goal is fulfilled, although we've seen that she also has the seeds of self-destruction sown within her. In the final scene, Harmon gets out of the car that's driving her to the airport and is seen playing chess with some adoring older men in a park. There's the hint that she may decide to remain in Russia, but there hasn't yet been an announcement on a second season of The Queen's Gambit, so we're left guessing. Season One concluded with a proper ending, which we can be happy for. Perhaps it's best to leave the story on that note instead of watching yet another series try to stretch itself out until it's run out of gas.