Joan Micklin Silver's 1977 film Between the Lines shows that journalism’s always been a commodity. 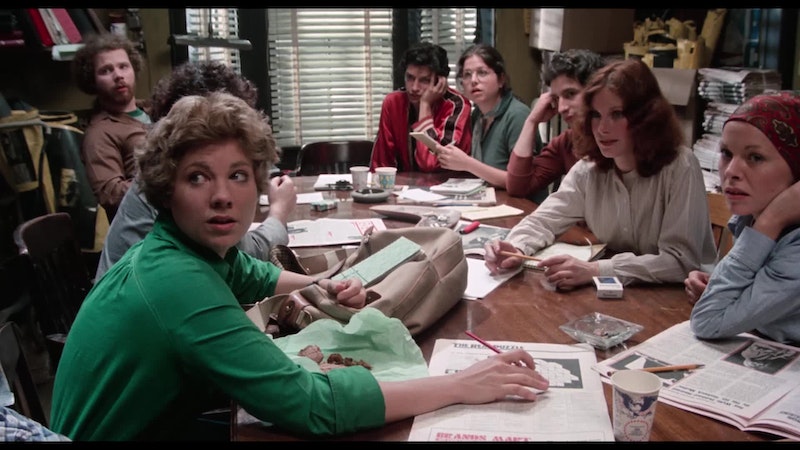 For as long as I can remember people in and around journalism have been moaning that the news business isn’t what it used to be. It’s worth looking back at a document from a previous era, the 1977 film Between the Lines, to be reminded that golden ages only exist in retrospect.

Written by Fred Barron, who’d been a journalist for a couple of alternative Boston newspapers, and directed by Joan Micklin Silver, formerly of The Village Voice, Between the Lines gathers a young ensemble cast to present a few days in the life of The Back Bay Mainline, a fictional Boston weekly. It’s not mainly about the characters’ journalism, but then it’s not really about any other one thing, either. You get interesting glimpses, and they’re enough to hold your interest though they don’t add up to a convincing whole.

The movie loosely centers on the on-again off-again relationship between writer Harry (John Heard) and photographer Abbie (Lindsay Crouse). Contrasting with this is the long-term but fight-filled relationship of Laura (Gwen Welles), a reporter for the paper, and Michael (Stephen Collins, who would go on to roles in Star Trek: The Motion Picture and Seventh Heaven), a frustrated novelist working on a book about the failure of the counterculture. Meanwhile, tyro writer David (Bruno Kirby) wants career advice from cynical fast-talking music reviewer Max (Jeff Goldblum). Long-suffering secretary Lynn (Jill Eikenberry) tries to hold the day-to-day life of the paper together while being hit on by obnoxious ad-man Stanley (Lewis J. Stadlen). But in the background are rumors the paper’s going to be bought out by sinister businessman Roy Walsh (Lane Smith, who’d go on to get his fill of newspaper life as Perry White in Lois & Clark).

This sounds like a lot of story, but it doesn’t work out that way. Harry and Abbie snipe and make up at random—one scene sees Abbie brush off Harry at a train station, then two scenes later (the next time we see them together) she shows up at his apartment in the middle of the night to sleep with him. Walsh’s plans aren’t developed over the course of the film; after getting mentioned early on, he just shows up at the end to buy the paper. Laura and Michael’s arguing never goes in an unexpected direction, and neither does their relationship, with the arguable exception of a downbeat conclusion. Only David’s floundering attempt to land a major story gives the film any kind of a narrative spine.

But again, this movie’s not built around a tight plot. It brings together a group of formerly-young former idealists, and lets character moments happen. One of the best comes after Laura hooks up with Harry, and they look back at old photos of the paper and reminisce about the long-gone days of five or six years before. It’s a convincing moment of the characters reflecting on what the paper used to be like and what it is now; on their lives, and what’s gone missing from them. But it’s convincing mostly because you don’t entirely believe them. You watch them romanticizing their experiences of just a few years before, and you see an early example of boomers idealizing the late-1960s.

Still, if the movie lives in its character moments, the problem is that none of the actors have any observable chemistry with any of the others. Kirby and Goldblum do best on this score, Kirby by playing his painfully earnest character much as written, Goldblum by largely ignoring what the script suggests about his character and instead playing him as a collection of Jeff Goldblum mannerisms. Somehow that works, but neither Heard and Crouse nor Welles and Collins are able to create a sense of characters in long-standing pairings. A scene between Heard and Collins, talking about writing and Collins’ agent, is painfully bland.

The film almost succeeds despite this, just because of how it realizes its setting. The Mainline’s published out of a house repurposed as the paper’s offices, and the sense of place is rich. Comic book covers and random posters cover the walls, the coffee machine’s busted, a pinball machine sits by Lynn’s desk. Desktops hold typewriters and scatterings of paper. But go through a door and the ordered, antiseptic office of Stanley’s ad department is entirely different.

The set design’s just as effective in the other locations (Harry’s home, a record store where Max sells his review copies, a bar where the staff of the paper hold an unconvincing party), and it fits the grainy visual quality. There’s not a whiff of punk in this film, but there is a feel of 1970s analog grit. Unfortunately, that doesn’t carry over to the sound design, which is lacking in texture; dialogue’s flat, emphasizing the actors’ lack of connection.

There’s a good moment early on when Harry reflects on one of his first big stories, about abuse in a nursing home, and how he found out the same thing was still going on years later. It’s a sharp observation, not least because you can imagine a reporter making the same discovery and having the same disillusionment today. Journalism reveals much, but changes little without activism and constant pressure. Between the Lines knows that. Its characters are wistful for a golden age of late-1960s journalism unsullied by wealthy businessmen, but the movie undercuts their nostalgia: the paper changes because the staff’s not willing to take a collective stand against the new owner. Golden ages are an illusion; journalism’s always been a commodity, just one that’s sometimes leavened by idealism.