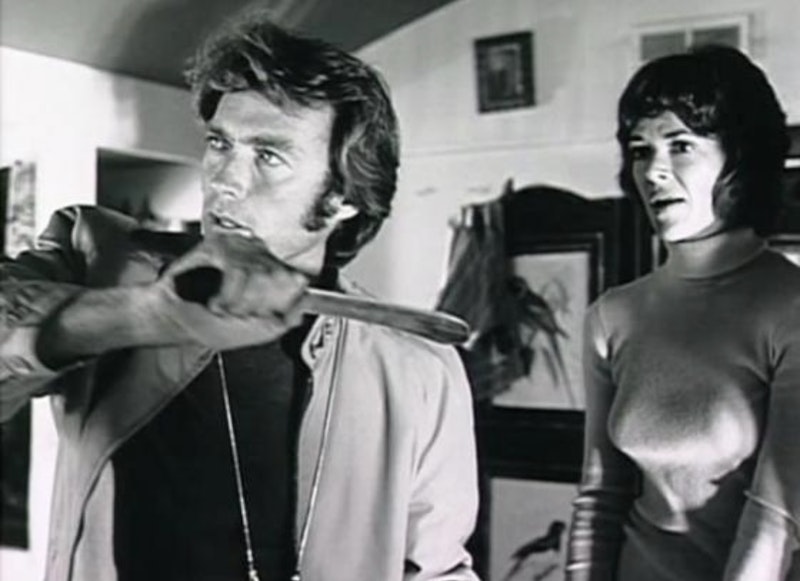 Glenn Close has long been considered the iconic crazy bitch on film for her performance as Alex in 1987’s Fatal Attraction, still dominating late contenders like Angelina Jolie in Girl, Interrupted and Rosamund Pike in Gone Girl. But the original and best crazy bitch on film was Jessica Walter in 1971’s Play Misty for Me. There has rarely been as harrowing a depiction of mental illness on screen as Walter’s savage, sexy, and terrifying portrayal of Evelyn Draper, a woman suffering from borderline personality disorder. The film was Clint Eastwood’s debut as a director, and while Eastwood may direct and star, this is Walter’s movie.

Play Misty for Me has now been beautifully restored by Kino Lorber, and the new Blu-ray is stuffed with great extras, including a five-star audio commentary by film historian Tim Lucas.

Eastwood plays Dave Garver, a groovy nighttime jazz DJ in Carmel, California. Dave quotes poetry during his shift, with a special love of Edgar Allan Poe. One sexy-sounding listener frequently calls in request that he “play ‘Misty’ for me,” referring to the atmospheric jazz classic by Erroll Garner.

One night in a bar after work Dave meets Evelyn. (Eastwood’s directorial mentor, Don Siegel, plays a bartender in these scenes). Even though Dave is committed to another woman (Tobie, played by Donna Mills), when he tells Evelyn this, she says that they can sleep together with “no strings attached.” Bad move. Garver has become entwined with the same woman who calls every night requesting he play “Misty.” She isn’t right in the head. The script by Jo Heims flows nicely, taking its time to slowly draw us in.

What makes Walter’s performance so incredible is that there’s no hint of what is to come. Whereas in Fatal Attraction Glenn Close has an edge to her even in the early scenes, Walter’s Evelyn Draper is open, nurturing, witty and self-aware. After their first encounter she brings Dave groceries, her gorgeous smile, psychological insight, and wide, accepting eyes winning over his initial discomfort that she has come uninvited to his house. When she later appears in his driveway one night and drops her coat to reveal she’s naked, it comes across as playful—and hot—more than dangerous. We like her. As film historian Tim Lucas notes in the audio commentary, Evelyn is like the sea that tosses and turns off the coast of Carmel—life-affirming and exhilarating but also dangerous and deadly. Soon her flirting turns obsessive; her infatuation with Dave manic and murderous. Evelyn is nuts, and she won’t stop.

Although Misty is his first time behind the camera, Eastwood is already showing the things that would become trademarks. His direction doesn’t move around a lot, giving the actors time and space to perform their scenes. (This was done to momentum-killing effect in Richard Jewell.) There’s an excellent jazz score. It’s set in a California location, where Eastwood has a personal life and can shoot for cheap. And it’s much more intelligent than Eastwood is often given credit for, with the Poe foreshadowing adding English-major depth. The drawbacks are the occasional use of a song “The Dirty Boogie,” which clashes with the mood of the film, and some dated stereotypes about black and gay people.

If you get the new Blu-ray, make sure you watch Play Misty for Me with the audio commentary on, at least if you’ve already seen the film once. Film historian Tim Lucas kills it, offering well-researched factoids, film history, social commentary that’s modern without being smug about 1971 mores, and great quips. He tells us the recent value of the cottages used for filming; noting that one of them is big enough “to have room for all of Evelyn’s mood swings.” There were no sets used in the film, only authentic interiors. The brief appearance of a gay character played by Duke Everts is “almost Charles-Nelson Reilly broad.” Eastwood came in before the deadline and under budget. The film is both representative of the power of nature and a time capsule commentary on the fallout from the sexual revolution of the 1960s. The Sardine Factory, where Dave and Evelyn first meet, is still in business. As the final credits roll, Lucas asks, “So, are there any requests?” It’s a play on Dave’s job as a disc jockey, and ends things on a wonderfully satisfying note.