The Perverse Gaze of Dracula

I vant to suck your feminist film theory. 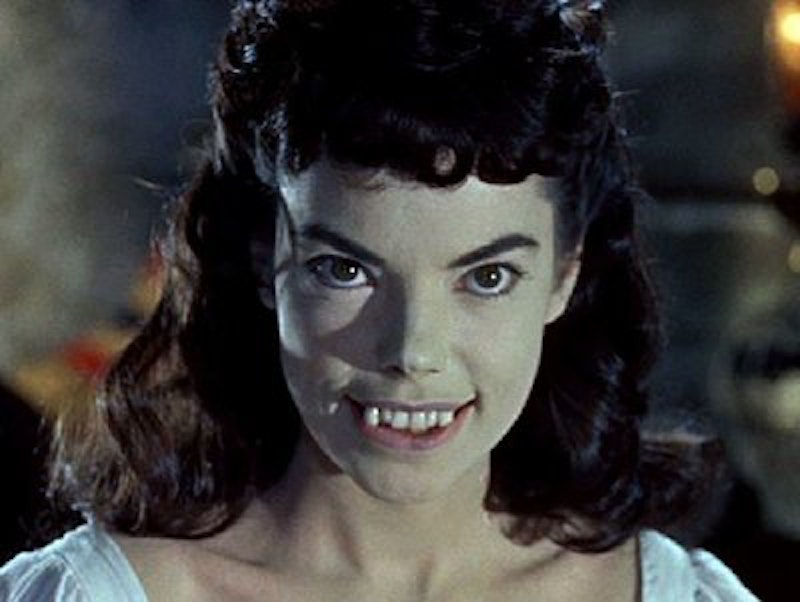 This is the second in a series of posts on the nine Hammer Dracula films. The first post is here.

That's the thesis, more or less of Laura Mulvey's 1973 essay, "Visual Pleasure and Narrative Cinema." Mulvey argues that traditional Hollywood cinema is set up so that viewers identify with the main male character doing manly things, such as staring at, saving, and ravishing women.

It's how the novelization of the 1960 Hammer film Brides of Dracula works. Dr. Van Helsing, in the book, is a dashing, thrusting hero who senses that the narrative "from the very early days of his life… had been leading him toward… this girl." The girl's name is Marianne, and, turn a page or two, and Van Helsing is “caressing those magnificent breasts and firm flanks." Turn another and "their two bodies are united strongly in the age-old renewal of the ritual of love," as the writer Dean Owen delicately puts it.

Mulvey would nod sagely over the book and its predictable, albeit clumsy, juxtaposition of narrative inevitability and heterosexual heterosexing. But were Mulvey to turn to the actual film version of Brides of Dracula, she might be taken aback. Owen based his novelization on the script by Jimmy Sangster, but that script underwent some major alterations on its way to the screen.

Most notably, original, lusty Van Helsing is replaced, onscreen, by Van Helsing (Peter Cushing) as cold fish.  The young schoolteacher Marianne (Yvonne Monlaur) tells him how wonderful, kind and brave he is when he rescues her from a fate worse than death. Her boss, the schoolmaster, Herr Lang (Henry Oscar) even insinuates that Van Helsing is her boyfriend, or "follower." But Van Helsing's stern eyebrows are impervious to innuendo. Despite Marianne, despite Herr Lang, despite the original script and Hollywood convention, the doctor refuses to fall in love with the leading lady. If he's going to thrust, he’ll only thrust noble, chaste stakes through vampire hearts.

Alas for Van Helsing's sense of propriety, the refusal of the heterosexual plot does not, in fact, result in chastity. Instead, it leads to polymorphous perversion. At the beginning of the film, Marianne is trapped at an inn, stranded on her way to her new teaching appointment. She is cruised, and then picked up, by the Baroness Meinster (Martita Hunt), who takes her back to her castle with intentions that seem openly indecent—when Marianne thanks her for the invitation, the Baroness responds, with lip-licking frankness, "I am a selfish and lonely old woman."

Soon enough, Marianne discovers the Baronness' secret; she keeps her son, the Baron Meinster (David Peel), locked away in a nether chamber. When Marianne releases him, he quickly clasps his mother in an unspeakable embrace. So from lesbianism we've gone to incest—and the rest of the film adds polygamy, intimations of male homosexuality (when the Baron feeds on Van Helsing's neck), and, inevitably, more lesbianism, as Marianne's roommate at the school, Gina (Andree Melly), is bitten by the passion. "Put your arms around me please, I want to kiss you, Marianne," vampire Gina hisses, as Marianne backs away, mouth open, bosom heaving, in a display of fright that could easily be read as something other than fright. "Please forgive me for letting him love me," Gina insists. Robbed of the firm guidance of Van Helsing's lust, concupiscence cannot find its normal channels. One kiss leads to another. Is Marianne terrified of vampirism, or of the proliferation of polyamory?

As erotomania spurts redly across the screen, the plot itself starts to dissolve. In the novel (based on the script), Marianne's goodness is demonstrated by her instinctive attraction to Van Helsing. She frees the Baron only because of his vampiric powers, and later agrees to marry him, despite the fact that he's an undead abomination, because of the same hypnotic force from his evil eyes. The novel becomes a struggle between male gazers to control the common object of desire. Van Helsing sees Marianne as his virtuous possession; the Baron sees her as his filthy plaything. "You don't need his love. You need mine!" Van Helsing declares in the book. The man who controls Marianne and defines her with his gaze wins. That's the plot.

But in the movie, Van Helsing is completely uninterested in gazing at Marianne, with the result that the plot wavers and staggers off down uncertain passageways. In the scenes where Marianne plots to free the Baron, for example, there is no suggestion, as in the book, that she’s controlled by him. Instead, her attraction to him seems to be just that: sexual and romantic interest. Granted, it's a little surprising, since Peel as the Baron is significantly less attractive than Christopher Lee as the count. But perhaps Marianne simply feels she has to make do with what she's got.

In the first Hammer Dracula, Jonathan Harker is deceived when a female vampire begs him for aid; he dupes himself via chivalry and lust. Marianne takes up that same role of savior—and like Jonathan, she seems to find it stimulating, in various senses. When she emphatically tells the Baron, "I promise to help you!" her whole face lights up—not as if she's in a hypnotic trance, but as if the pretty little bow on her nightgown is trembling with the possibility of adventure, action, and romance.

Similarly, when the Baron comes to the school to see Marianne again, she doesn't recoil in fear, though you'd think at this point she'd know there was something odd about the guy. Instead, she says, "Herr Baron!" as if overjoyed. Then she agrees, all at once, to marry him. The film flirts with the idea that he bites her, but it never follows through, and he doesn't seem to be controlling her will, as in the novelization. Instead, she's just into the idea of marrying an attractive, wealthy, powerful young man, even if she barely knows him (though she does seem to give a mild start of nervousness when she's reminded in passing that he killed his mother). Maybe she's just not very perspicacious: Yvonne Monlaur rarely allows anything like cunning or sentience to steal across Marianne's face. Or perhaps, beneath that mask of studied innocence and sweetness, she decided, understandably, that life under the dictatorial schoolmaster was insupportable, and she wanted to pursue her own story, even if it has to be a bargain-basement Cinderella.

For Laura Mulvey, traditional narrative cinema uses "The image of women as (passive) raw material for the (active) gaze of man." The quintessentially male viewer, identified with Van Helsing, should gaze upon Marianne and then whisk her away, to a satisfying salvation and consummation. In Brides of Dracula, whether through haste, incompetence, intention, or some combination of all of those, director Terence Fisher's narrative fragments and stumbles; the story, meant to pin Marianne down for Van Helsing's virile activity, doesn't work. Instead, Marianne keeps acting on her own, for obscure motives. And just as the plot goes astray, so does the eroticism, focusing not on Marianne as object of Van Helsing's gaze but on everyone as the object of a viewpoint that wanders wildly.

The final scene of the film, with Marianne resting her head on Van Helsing's shoulder as he looks soulfully up at the burning mill, is a traditional end, concluding the narrative with hero and heroine each in their place. The most memorable moment of the movie for me is the strange scene early on, when the Baron tells Marianne there are grave risks in freeing him, and asks her if she dares. "Yes!" she says, jaw set, eyes suffused with joy. "I dare!" Then she turns with a twirl, purple nightgown rustling about her, determined to find the key to take her through some odd, broken passage to some other story.