She’s a marvel of the global age. 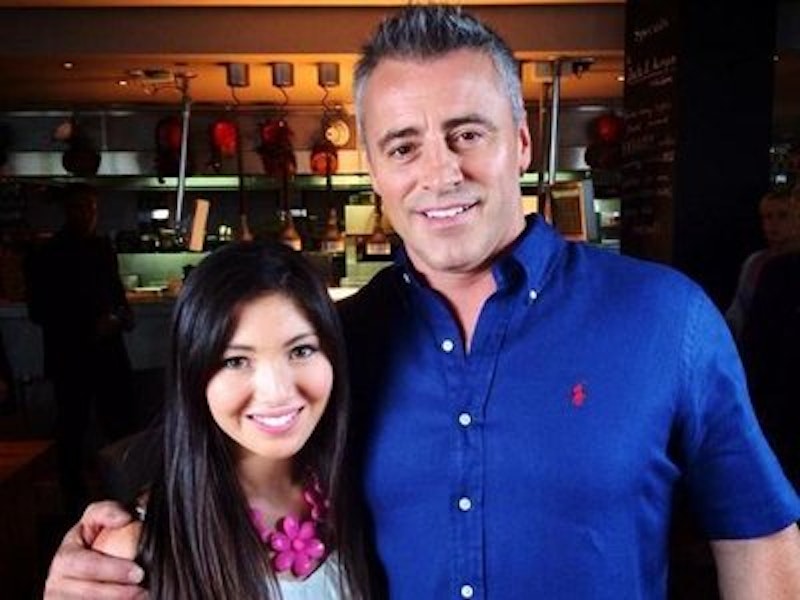 Something that snuck up on me about Episodes: they hire very good people for bit roles. At some point in the fourth season, a gang of Japanese girls bothers Matt LeBlanc while he’s eating. They want to take a selfie with him and the selfie doesn’t go right. The girls fuss over the camera settings and want to try again. This conferring is in Japanese; the four of them twitter back and forth, registering stages of concern. It occurred to me that I didn’t know if the girls were Japanese, as in actually from Japan. If they were, how did they communicate with the director? Maybe they were just skilled performers born over here (meaning the West, since Episodes is shot in Britain). One thing our modern age does beautifully is to train actors. High-level skill is now lying around in heaps. Four young women of the right ethnic descent might band together as a troupe, an effective one, for a single brief outing on a sitcom.

Googling finds the credit “Japanese girl” for this episode on IMDB. That’s “girl,” singular; the others get nothing. The actress in question is five feet, one inch, and she stood with dish eyes brimming as Matt LeBlanc cursed about a producer. The woman has the last name of Atkins, first name Hanae, and dig her background: “… brought up in Buckinghamshire, South East England. Growing up in a family of musicians, Hanae has nurtured her passion for the arts from an early age. From 3 years old, Hanae has worked at her talents in piano and trumpet in which she attended many,” etc. Also a trained dancer, “now studying Drama at Royal Holloway University of London.” Born in 1996.

So, yes, well-trained performing talent now lies about on every side. That stuff we got. Along with it we have a family in Buckinghamshire. The parents were born on different sides of the planet; the children (all right, at least one child) nurtured passions and pursued disciplines. I’m guessing that this sort of family goes along with an age of extraordinarily good acting instruction. For decades now, especially bright people have been coming together across the continents. Their lives have intersected because these people have learned skills that make them so valuable they can up and change continents. This skill learning and world hopping has reached the point that a short bit I liked in an episode of Episodes had some disciplined talent on hand to make it a reality.

Not to get too heavy-weight, but I remember a professor saying that the age of the Khans, back when Euro-Asia was tied together from Hangzhou to Crimea, was an age of richer goods across the known world. The potters (or whoever) didn’t get more inspired, necessarily, but they had better materials and sold to a market that expected higher levels of technical execution. Then the Khanates foundered, and I suppose goods returned to their normal levels. If we’re headed for such a bump, remember that once upon a time you could see a sharp performance by an impromptu comedy group of East Asian women filmed outside London, and that this ensemble was brought together for three golden minutes of an episode of a series I watched half-asleep in front of Netflix.