Though that's not saying much. 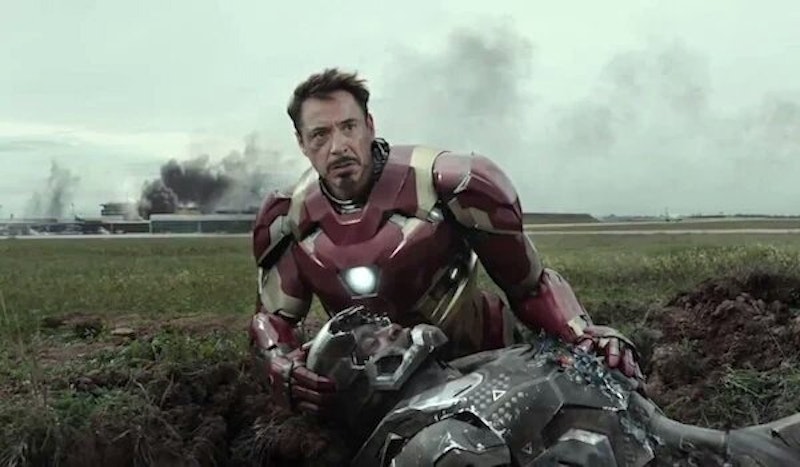 As we go deeper into the Marvel cinematic mythology, each film has more work to do: It has to tell its own story, service a growing roster of characters, fitting into the overall mythology, and also taking some time to set up whatever comes next.

Captain America: Civil War isn’t the best overall Marvel film—I’d rank it behind the first Iron Man and Avengers and about even with Captain America: The Winter Soldier—but it does the best job balancing those obligations. It also boasts the most entertaining sustained action sequence in Marvel history.

Civil War is nominally a Captain America film, and largely follows a plot that continues the two earlier standalone Cap films, mostly focused on the titular superhero’s decades-spanning friendship/rivalry with Bucky Barnes/The Winter Soldier (Sebastian Stan.) The plot focuses on the question of whether or not the Winter Soldier is still a brainwashed super-soldier responsible for terrorist attacks around the world. And also, because civilian casualties all of a sudden matter greatly in superhero movies, there’s fallout from the Eastern European blowout that closed out last year's second Avengers movie.

So there’s a UN plan, pushed by the U.S. secretary of state (William Hurt), to put the Avengers under U.N. supervision. Iron Man (Robert Downey, Jr.) is on board, but Captain America objects. This leads into the “civil war” storyline that entails the Avengers splitting into warring factions, with Iron Man and Cap as leaders, which will last for several more movies.

Also, on top of various non-superpowered characters, the film has to introduce characters soon to have their own movies: Black Panther, as well as… Spider-Man (Tom Holland), now in the Marvel fold following a recent Disney/Sony corporate deal. There’s also a separate villain, a German baddie played by Daniel Bruhl, who has similar motivations as Lex Luthor in Dawn of Justice, albeit ones presented in a much more straightforward and less convoluted manner.

The film juggles all of this expertly, and screenwriters Christopher Markus and Stephen McFeely deserve credit for keeping it all straight, as do directors Joe and Anthony Russo.

It all leads up to an absolutely amazing action sequence, an extended brawl set outside a German airport, which is like a better version of the third act of the first Avengers movie. Not only is the scene shot beautifully, but it also finds inventive uses for all of the superheroes’ powers, and even their relationships with each other. The film’s other major triumph is the return of Spider-Man, which represents the first good cinematic treatment of Spidey since Sam Raimi’s second film back in 2004.

All of the Spider-Man stuff is pure gold—starting with the casting of the 19-year-old Holland, who actually plays Peter Parker as a kid. Sure, the casting of Marisa Tomei as the normally elderly Aunt May is ridiculous, but at least the movie has fun with it. It’s enough to get excited about next year’s standalone Spidey film.

Civil War isn’t perfect. It gets off to a slow start, and I’m not certain that the Cap/Winter Soldier story needed to be spread over three movies instead of one. The action sequences, especially in the first half, are inexplicably shot in shaky-cam; I really thought filmmakers were over that by now. As usual, there’s no reason to see this movie in 3D, and it’s a too long at two and a half hours.

As for that other movie this year about warring superheroes, in which one is motivated by the death of his parents: It’s better than Batman v. Superman by every conceivable measure. There’s actually sunlight, and there’s no overarching sense of bleakness and nihilism. Most importantly, the people in charge of this film know the characters, what’s appealing and significant about them, and how to structure a story featuring a whole bunch of them.