All Out of Sorts 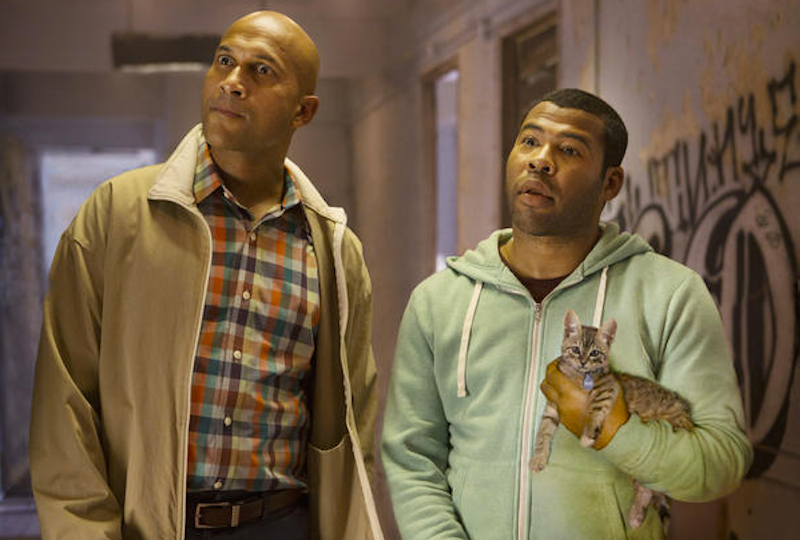 Keanu, the first cinematic starring vehicle from Keegan Michael-Key and Jordan Peele, the former Comedy Central duo known as Key and Peele, begins with a truly inspired opening scene: A parody of The Boondock Saints in which two gunmen (Key and Peele) break into a church and make bullets fly as classical music swells. I laughed as hard as I ever have at the opening of a comedy.

I didn’t laugh a whole lot after that. Despite the strong start, the further Keanu gets into its plot, the less funny it becomes. It’s a thoroughly mediocre comedy that not only isn’t up to the standard of the stars’ TV work, but doesn’t let them do most of what they’re good at. Instead, it comes across more as a warmed-over rehash of the Cornetto trilogy.

In Keanu, directed by TV series veteran Peter Atencio, Key and Peele are two nerdish adult pals—Key a married family man, Peele a lonely, weed-happy single guy—who stumble into a complex underworld feud. The hook is that Peele’s character has adopted a small, cute cat—named Keanu—while multiple groups of criminals are fighting over custody of that same cat. Once the cat falls into the hands of a particularly vicious drug dealer (Method Man), our heroes are mistaken for the pair of cold-blooded hit-men from the Boondock Saints scene, and have to pass themselves off as bad dudes in order to get the cat back. This leads them into dicey situations, including a nightclub shootout and a lengthy, multi-car chase scene.

Keanu is yet another movie that thinks nerds pretending to be tough guys for an extended period of time is really funny—and if it’s not that, it’s straight-laced squares accidentally taking drugs. What I loved about Key and Peele’s Comedy Central show was that they generally avoided dumb clichés like these, or at least mocked them. The two stars acquit themselves fine, although as usual, Key is a considerably more engaging and charismatic screen presence than his partner. However, the supporting cast is underwhelming. Will Forte plays a typical stoner type, the likes of Nia Long, Rob Huebel and Luis Guzman are not given a lot to do, and Method Man plays a guy named “Cheddar,” which I guess is supposed to be hilarious because his character on The Wire was named “Cheese.” One actress whose name I won’t reveal has a pretty daring and gutsy cameo as herself, but the scene goes on forever and soon loses its comedic potency.

Green Room raises an interesting moral dilemma: If you’re a struggling punk rock band that literally doesn’t have enough money or gas to get home, is it justifiable to accept a gig at a white supremacist compound in rural Oregon?

That band, The Ain’t Rights, finds themselves in an even worse dilemma than that, in the film directed by Jeremy Saulnier (best known for 2013’s cult revenge film Blue Ruin.) This is an ugly, ugly film. The band, consisting of Anton Yelchin, Alia Shawkat, Joe Cole and Callum Turner, is directed to the highly questionable gig, where they’re specifically warned to not bring up politics. Perhaps unsurprisingly, things go awry relatively quickly, and not only because the band decides to play the Dead Kennedys’ "Nazi Punks, Fuck Off” before their skinhead hosts.

There’s a violent crime, and a hostage situation, and the band soon battles the compound’s leader, played by a cast-way-against-type Patrick Stewart. Blue Ruin had something of a cult following among film buffs, and Green Room is starting to get one too. But I don’t see it—the film was incoherently shot and edited, especially in every moment of action and the interminable outdoor chase scenes in the movie’s second half. The set-up has some promise, and Stewart is a delight, but overall it doesn’t come together.