Fearing women in Hitchcock and Dracula:  Prince of Darkness. 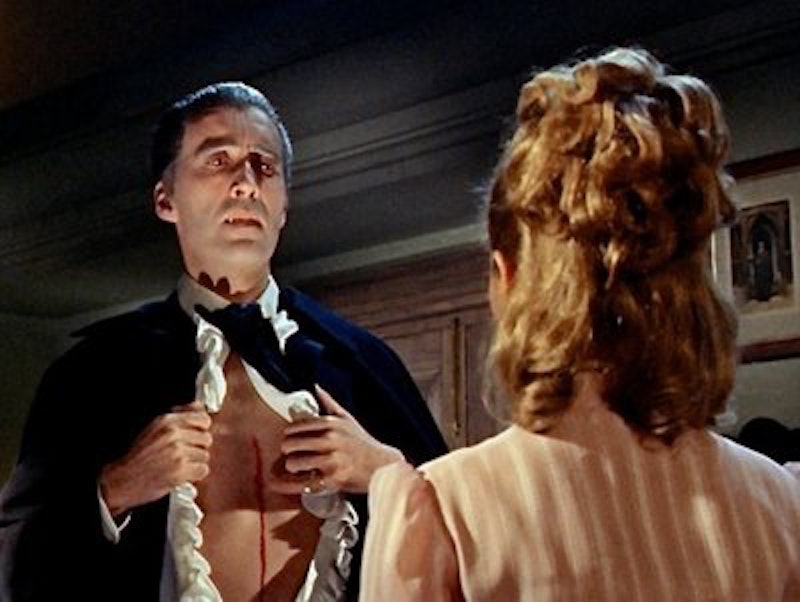 (This is the third in a series of posts on the nine Hammer Dracula films. The second post is here.)

Psycho isn't considered a vampire movie. But watching Dracula: Prince of Darkness, I was reminded of Hitchcock's iconic horror film. In particular, the scene in which Dracula (Christopher Lee) wordlessly hypnotizes Diana Kent (Suzan Farmer), recalls a famous moment early in Psycho when Marion  Crane (Janet Leigh) looks into the camera with a the hint of a cruel, decadent smile. Marion is thinking about the money she's stolen, and imagining the consternation of her boss and victim.

For the most part, Marion post-robbery is scared, worried or guilty. This smile is the one hint we get that she may have taken pleasure in the misdeed. For an instant, Marion really is a villain, reveling in the allure of power and transgression. Diana's hypnotized expression in Prince of Darkness is remarkably similar. She doesn't quite smile as Dracula opens his shirt and draws his fingernail down his chest. But there's a Marion-like frisson of forbidden desire as the camera lingers on her face, fascinated by the glimmer of evil needs and schemes flitting across the consciousness of a bosomy blond.

Psycho, from 1960, is usually seen as a watershed in horror. Hitchcock dispensed with the gothic shivers of vampires, werewolves, aliens, and monsters, and instead rooted terror in the twisted mentality of an everyday murderer. Who needs the occult when you can fear deviance instead?

Is Psycho really all that much of a break with the monstrous past, though? Prince of Darkness is from 1966, but though it came after Psycho, that's not where it got its fascination with corrupted women. Rather, corrupted women are a longstanding vampire trope stretching back to Stoker, if not before. Marion, who has sex out of wedlock and then turns inevitably to crime and evil, fits nicely in the vampiric tradition where female eroticism is only expressed by women whose souls are thoroughly damned. In Prince of Darkness, boring, whiney Helen (Barbara Shelley) is utterly asexual in the buttoned-up Victorian manner—until she’s taken by Dracula. Suddenly, she’s running about in a nightgown and propositioning her sister-in law. "You don't need Charles," she purrs at the horrified Diana, just as the fangs come out. Helen will be your daddy, little girl.

The vampire's penetrating, mastering teeth are a fairly obvious phallic symbol—and as such are especially disturbing, or wrong, when wielded by a woman. The terror in the vampire story, as in Psycho, is not just of the feminine corrupted, but also of the feminine empowered, or turned into, man. The twisted grin on Marion's face early in the film is echoed by the twisted grin on actor Anthony Perkins' face when he’s portraying Norman Bates possessed by his mother. Marion masculinized by her robbery and Norman feminized by his mother—they meet in a middle ground of transphobic panic, where any blurring of gender roles, from any direction, leads to chaos and evil.

Bates is, famously, a split personality. His intense relationship with his mother is supposed to have driven him insane; he killed his mother out of jealousy when she remarried, and then began to wear her clothes to commit further murders against women who arouse him and of whom he believes his mother will disapprove. Male and female blur together, and in doing so blur sex and violence. That dynamic is couched in the pseudoscientific explanations of psychoanalysis, but its true roots are based in venerable horror film traditions. When Christopher Lee in Prince of Darkness draws that vertical gash into his chest, for example, he's feminizing himself, and masculinizing Diana, who, through hypnotic role-play reversal, becomes the vampire sucking Dracula's blood.

The hulking servant Klove (Philip Latham) notes drily when the British tourists ask him if Dracula has an heir, "My master died without issue, sir... In the accepted sense of the term." Dracula doesn’t make babies, but he spawns in other ways. Vampires are terrifying because they embody disordered reproduction. Dracula’s a man who gives birth to women, and those women in turn desire, like men. The vampire's twisted, evil gender confusion calls forth twisted evil gender confusion in others, just as Marion's unwomanly act of robbery seems to bring into being Norman Bates, a man who’s also a woman.

The breaking down of gender barriers is terrifying, but also exciting. Desire, that lust to penetrate to the pulsing blood beneath, is phallic and male. That means that women can't express concupiscence without becoming unwomanly, tainted with the "cult" of vampirism, as Prince of Darkness puts it. A woman touched with desire is also a woman who must be destroyed. Sex and murder are simultaneous impulses.

Thus, in the most famous scene in Psycho, the aroused Norman, transformed into Mrs. Bates, stabs Marion over and over in the shower, a violent, repetitive thrusting that references coitus as it delivers death. And the most famous scene in Prince of Darkness works exactly the same way. The animalistic Helen, breasts heaving in her nightgown, writhes and thrashes as several men restrain her upon a table. The sober, serious Father Sandor (Andrew Keir), who’d never deign to look at breasts heaving in a nightgown, picks up a phallic stake and pounds it into Helen's heart as she gives one last tortured scream. Blood oozes out of the puncture wound, just as in Psycho you see the blood swirling down the drain—penetration, vocalization, climax and bodily fluids.

"Now bear in mind, Mr. Kent," Father Sandor assures the understandably perturbed Charles (Francis Matthews), "this woman is not your sister-in-law. She's dead. This is a shell, and what it contains is pure evil. When we destroy it, we destroy only the evil." Sandor occupies the same position as the psychologist in Psycho; he is the stabilizing patriarchal presence who explains and rationalizes the horrifying events. It's especially interesting in this context that Sandor, at the beginning of the film, upbraids a group of peasants for their rank superstition when they prepare to stake a dead peasant girl through the heart. He appears to be a voice for modernity and rationality. But then it turns out he just knew that girl wasn't a real vampire, as opposed to all those other girls who do, in fact, deserve to be staked.

Once, we believed in supernatural beings from the pit, and now we believe in supernatural beings from the pit, except with more science. Marion's corruption is psychological and Diana's is occult, but both are appealing and evil in the same way, and for the same reasons. Norman Bates is the same old vampire as ever, hungering for those sexy, twisted women, who are so exciting they must die.