The Most Painful Film Ever Made 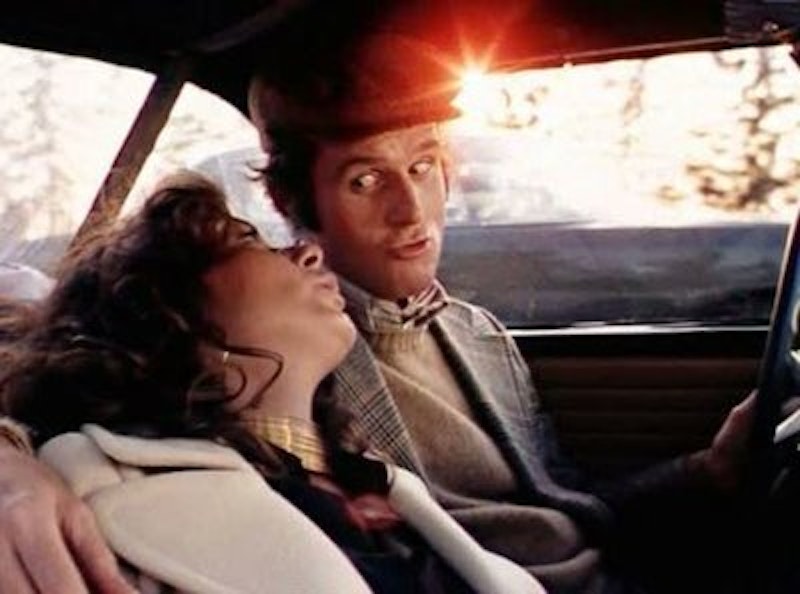 This is the most recent post in a series on women filmmakers. The last, on The Night Porter, is here.

Gore, blood, violence, torture, eyeballs squelching and faces torn apart by ravening werewolves—I don't have any problem watching those onscreen. Horror is fine. Sit-com humiliation humor, on the other hand, leaves me cringing, or lunging to change the channel. If it's a choice between seeing humans dissolve into gelatinous blots of blood and bone and or some schlub awkwardly lie to his in-laws at the dinner table, I'll take the blood and bone.

It's in that context that Elaine May's 1972 The Heartbreak Kid may be the most painful film I’ve ever watched. Lenny Cantrow, played with brittle, oleaginous entitlement by Charles Grodin, is a repulsive pile of slime. The film opens with his calculated and speedy courtship of Lila (Jeannie Berlin), and their marriage in a traditional Jewish ceremony. The two drive to Miami Beach for their honeymoon, where Charles instantly falls in lust with Kelly Corcoran (Cybill Shepherd.) He dumps Lila, obtains a quick divorce, and, despite the strenuous objections of Kelly's father (Edie Albert), pursues her to Minnesota. Kelly is initially dismayed by his sudden reappearance, but she's also flattered, and the film ends with Lenny's second wedding, which doesn't seem likely to lead to a marriage any happier than the first.

Part of the reason the film is uncomfortable to watch is that Lenny's treatment of Lila is so extravagantly cruel, even as she continues to unwittingly idolize him. Lila sings off-key; she gets egg-sandwich on her face; she wants her new husband to reassure her that the sex is good. Lenny treats these foibles as unforgivable signs of incompatibility. When she gets sunburned he screams and berates her, then he leaves her alone in their hotel room on her honeymoon with a series of flimsy excuses, escalating into violent denunciations when she questions his veracity.  When he finally tells her he wants out of the marriage, she says she has to throw up, and asks him for change to go to the ladies' room—but he won't even let her do that. Instead he holds her down as she tries to escape and babbles on about how the divorce is all for the best, and nattering on about how they'll get dinner sometime together and how he feels closer to her than ever. She sits there with her mouth open, moaning with pain, clutching her tormentor because he doesn't have the common decency to let her walk away. Villains love to devise supposedly fiendish traps, but in terms of sheer emotional cruelty, the Joker has nothing on Lenny.

Lila's treatment is hard to watch, but even when Lenny's not with her, you want to avert your eyes. He trails around after Kelly with a gauche obliviousness, joining her family at dinner or on their fishing boat. Kelly's father, despite his best efforts, is powerless before Lenny's utter lack of social decorum and self-respect. At a family dinner in Minnesota, Lenny praises the family's Midwest virtue by declaring, without a hint of irony, "There is no deceit in this cauliflower."

Mr. Corcoran responds that Lenny is full of horseshit. This is true—but the twist of the knife is that Lenny is utterly unaware of his own bone-deep dishonesty. Corcoran tries to pay Lenny to go away, offering him $25,000. Lenny refuses on principle; he believes in his love for Kelly and his deep sincerity, even though he gruesomely betrayed his first wife and has only known Kelly for a month or so. He may have lied to and manipulated Lila, but he's also lying to and manipulating himself. Grodin's performance, all awkward chuckles, passive-aggressive jibes, humble-bragging and cloying indignation, is a masterpiece of self-evisceration.

The self-evisceration is closely tied to anti-Semitic tropes. May and Grodin are both Jewish, but as Woody Allen's career demonstrates, Jewish creators are perfectly capable of sneering at nebbishy Jews. Where Allen always flaunts his nerdiness as appealing sexuality, though, May is less forgiving. Lenny’s a soulless man on the make, driven by dreams of assimilation and upward mobility. Blonde, Christian Kelly symbolizes everything he wants—a tradition and status that his coarse ethnic identity denies him.

May doesn't just indict Jewish men. The Heartbreak Kid 's vicious portrait of Lenny skewers men in general—and especially men on film. Practically the first scene of the film is Lenny looking at himself in a mirror, practicing his pick-up lines. "Hello," he says to himself, and you see him saying "Hello" with the same off-hand, confident intonation to Lila at a bar immediately afterwards. Lenny watches himself; he’s a character in the scenes of his own life. He natters on throughout the film about his "determination," but what he's most determined to do is appear determined. He insists to Kelly that all his life he's wanted a girl like her, with the same sincere self-delusion with which he told Lila he loved her.

Lenny's persistence, optimism, certainty, and quick-talking glibness are all traits beloved in Hollywood protagonists. Lenny is, in many ways, what a man is supposed to be; he's what women are supposed to want. Lila and Kelly both fall for it. The most unpleasant part of May's film is that Lenny is victorious; he experiences no comeuppance. If his marriage with Kelly falls apart, as seems likely, he'll just tell himself it was for the best, and go after someone else. May vivisects Lenny, and the cuts of her knife sting. But the thing that really hurts is that she can't stop him.