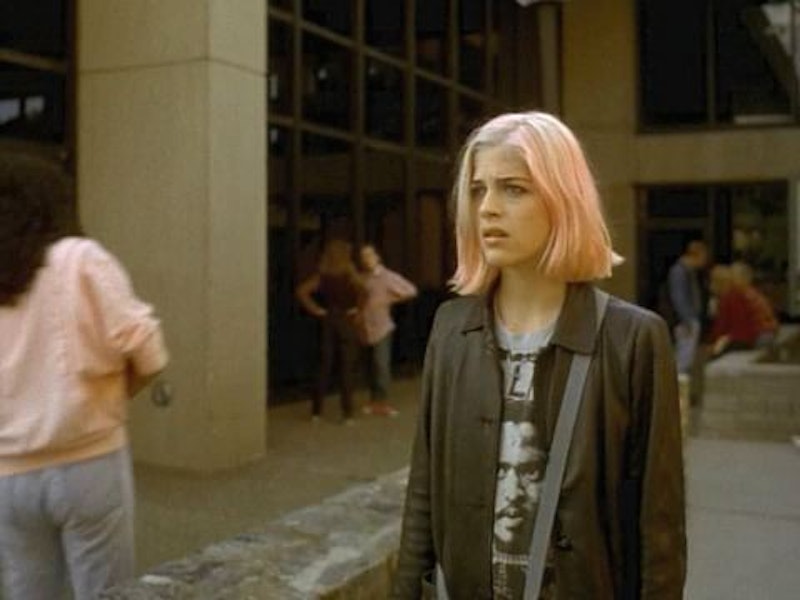 Even by writer/director Todd Solondz's own acerbic standards, Storytelling (2001) struck an especially sour note. As a portrait of the artist as a nakedly exploitative dick, his fourth film can feel overtly suffocating, self-swallowing in ways that stay with you. If the academic format—a short segment (“Fiction”) set at a college, trailed by a longer segment (“Non-Fiction”) centered on high school's end—is compare/contrast distracting, the whole is never less than stimulating. Solondz doesn't front here, thematically speaking. “Fiction” feels as artificial and affected as a student short story, while “Non-Fiction” is loose, baggy, bordering on pulse-free. Each section winds down with a primary character gazing impassively, for several beats too long, into the camera's eye. As usual, New Jersey is bane and setting alike.

By the end of the first segment, it's unclear whether what we've seen is true, because these events are so dryly methodological. Did graduate hipster Vi (Selma Blair) really hook up with her Nobel Prize-winning writing instructor, Mr. Scott (Robert Wisdom)? Was she really in love with the cerebral-palsied Marcus (Leo Fitzpatrick), who earlier wound down his own story by declaring himself a “cerebral person”? The cruelty on offer is too broad, too gestural, too telegraphed: the detail of Mr. Scott's novels being “so… so... aggressively confrontational” made me laugh, Vi discovering naked bondage photos of her classmates is overtly surreal, and post-coitial sweat as a key idea smacks of Screenwriting 101, which was probably Solondz's point all along. Belief is for suckers.

The director embraces Woody Allen in “Non-Fiction,” stunt-casting and costuming Paul Giamatti as Toby, a balding, bedraggled washout with ridiculously large glasses. Toby, a wannabe documentarian on a shoestring, has some vague notion of capturing the lives of an American family. After a high school principal blows him off, Toby stumbles into the listless Scooby (Mark Webber), the sort of privileged wasteoid too stupid or indifferent to recognize that smoking joints in the bathroom just outside a high school principal's office is bad business. Toby's a law-school dropout who wants to do something meaningful; disinterested in college, Scooby daydreams about being the next Conan O'Brien.

Neither has any hope, and “Non-Fiction” shrugs and slug-slimes forward at a pace that threatens to obscure the fact that it bears an underlying point, that it's reasonably complex in scope. Solondz marvelously communicates socio-economic nuances without much exposition, and his decision to set aside most of the Belle & Sebastian-commissioned score was a good one; stillness and silence are oppressive throughout, though there's a brief scene in the late going where a particular motif resurfaces in a cruel, crushing way. Scooby's nuclear family—led by a blustering, uptight John Goodman—is such a hyper-typical suburban nightmare it's tough to buy their ongoing tolerance of Toby, whose presence is made all the more obtrusive at meals because he's either so cheap that his camcorder lacks a zoom function or he's too inexperienced to know how to use it. But as Storytelling bumbles on, Solondz's craft is revealed even as his on-screen avatar declares rough cuts “kinda funny,” filled with everything we want movies to provide: deft foreshadowing, metaphor, ironic revenge.

It's possible to believe the events in this film are real, or real enough, most of the time. Still, my favorite scene is among the unlikely. Toby and Mike Shank-poached from American Movie in one of Storytelling's many unstated period gags-drift through a gymnasium where teenagers sit at desks, toiling over their SATs. Scooby's father has press-ganged him into taking the test. The camera finds Scooby, who's conscientiously darkening answer ovals so that, from above, they read “FUCK THIS SHIT.”