Britland vs. the Flying Saucers

The Crown makes rather a fuss. 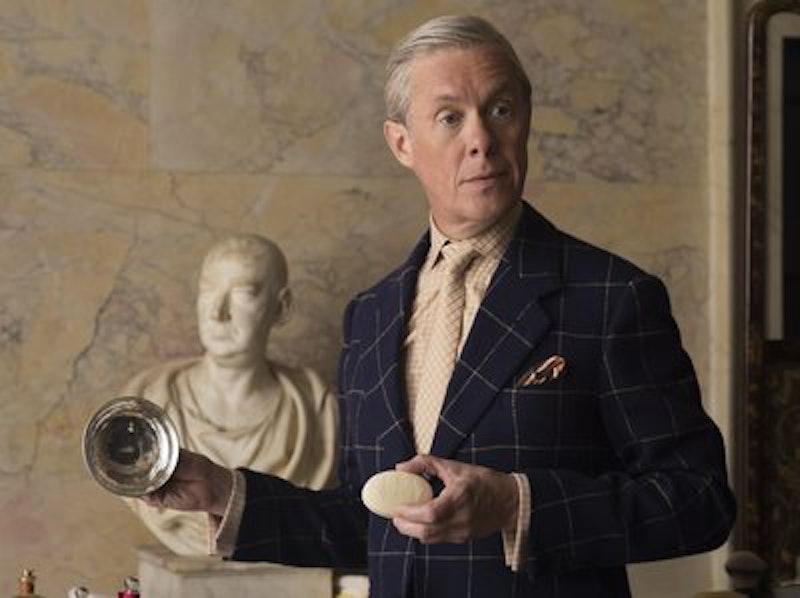 During the tea, Margaret takes a moment to let us know she’s a bitch. “No, I’m not done yet,” she says to the waiter, hard. That’s in episode one and may be considered build-up. The second episode features a moment of crisis: Margaret must hang back and wait as Elizabeth, now being queen, walks through a door first. Philip looks across to Margaret, from his wall to hers, and their eyes share a grim fact: second for life. The soundtrack lifts us on its shoulders and weeps at us. The camera’s tilted: Margaret, Philip and the walls loom. Here it begins, the script says, nodding. In short, there’s a whole to-do.

But the issue at hand is a couple of people feeling miffed. Not a bad topic, but not a topic the same size as the surrounding tumult. The Crown, the new prestige series on Netflix, has got the British monarchy mixed up with something else, the NBA or the tsars. The British monarchy isn’t one of those. As an institution, it’s prominent, interesting and possibly useful. But it’s not important. Its occupants are human show dogs and their kennel masters. The activities of these people can add up one way or another and still not matter much. Either way Margaret Thatcher is or isn’t prime minister, London is or isn’t plagued by terrorists, the Americans are making trouble or they aren’t, Europe’s getting closer or farther away, and young people are trying to be like the Beatles or the Sex Pistols or the Spice Girls or whoever’s up next. The monarchy’s an add-on, the cherry. What do you expect? It’s an institution tailor-made to have no power, and its representatives are trained to be dull.

This environment’s worth a comedy-drama. But not an extended swank photo shoot about the world’s fine-boned elites facing up to a sky filled with flying saucers. I allude to the sense of exalted foreboding that The Crown traffics in so heavily. The orchestra and synth wallop us, douse us like heavy waves whipped up in a bathtub. The lighting does its part too. Like many movies and shows, The Crown lays on the dark interiors with mid-distance white light. But here the mid-distance light seems bigger and more assertive. It looms behind profiles, behind hands with out-thrust pens. It has things to tell us.

Then there’s the cross-cutting. George VI goes on his duck hunt, young Elizabeth peers at her dad’s red dispatch box. George has just been told his health is shot and he’s going to die. Elizabeth contemplates the weight of becoming monarch. Of course, that weight is simply to read government papers and then do nothing. Further, nothing happens on the duck hunt or with Elizabeth and the box, not that particular afternoon. Normally intercutting leads up to something. The Corleones’ enemies all get killed, for example, or the guy reaches the girl ahead of the train. Intercutting on The Crown leads only to a feeling. It’s the same feeling fed by the white light, the score and the cheekbones: that bigness and sadness are afoot and we must honor them.

Peter Morgan, the show’s creator and executive producer, has always dealt small to mid-size, from office banter between junior MPs to leaders of state shooting the shit and feeling each other out. That’s changed. The Crown is big, big as a stocking on a baby’s foot. Only the show’s first minutes look promising. George VI (the excellent Jared Harris) is stuck, a face tended by a ring of hands, as his valets fasten him into his evening wear. Here the show captures a nuance and makes a point. The nuance is that monarchy British-style allows man to speak to man even when one man is king. The point is that whoever’s king must find a way to remain a man and that this can be tough going, what with a monarch primarily being seen as a thing.

From there The Crown leaves nuances and points behind. John Lithgow plays Winston Churchill with half an accent and possibly three body suits (I imagine them bunched up together). Claire Foy, Matt Smith and Vanessa Kirby are fine as the royal trio, the kids known as Elizabeth, Philip and Margaret. Of course, farms in England now grow fine-boned, keenly alert producers of facial fidgets. Those creatures that can be lit like particular public figures are then roped into service for period recreations. I’ve seen it done with Mick and Keith. It’s being done with the royal family, and a lot of white light’s involved.