The Meg is Our Big Shark Glut

Just a Big Gulp of shark. 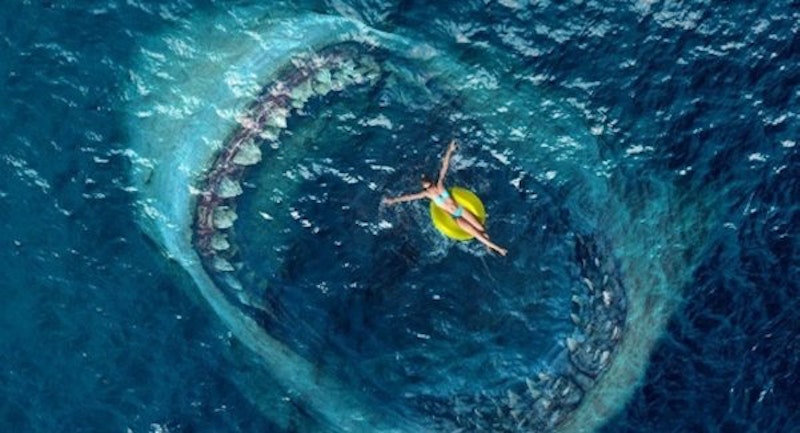 “Why don’t you try this number? Three!” Three what? I forget. But The Meg has lots of wheeling and finger thrusting. The movie’s participants doomily intone and tensely disclose. “It’s Lori,” someone tells Jason Statham. “Your ex-wife and her crew are trapped down there below 12 thousand meters.” The line must’ve been helpful to the Statham character. (Oh, Lori. Ex-wife who likes submarines. Yes.) The dialogue has other gears too. Here’s some girlish banter: “I would have lured them with whale songs,” says Bingbing Li, an actress with a pearl-drop face and a phonetic command of English. When she speaks Chinese, Li sounds normal. But most of the time she isn’t speaking Chinese. Then her words sound like they were recorded separately, one from the other, and nobody checked the mike levels or whether some of the words might have echo. All this is the effect of her intonation. “I-would-have lured them with-whale songs,” she says. Maybe it’s “suh-ongs.”

You have to love sharks to watch this movie, because the rest of it is just too dumb. To enjoy The Meg, and not just weather it, you have to be the sort of person who sometimes reflects on the baffling limitations of our media environment, one in which our supply of shark footage always remains finite. This movie is intended to give you a glut, an event to be remembered a life-time; watch it and your appetites will be fulfilled. Of The Meg’s hour and 47 minutes, I’d guess that 35 minutes provide a generous long look at one shark or another, most often the vast megalodon of the title, and that 45 minutes show people swimming toward or away from sharks. I don’t know what this leaves over, but that part was too much.

The movie industry expected The Meg to flop. Instead it’s North America’s number one film and a hit around the world. To modify my shark theory, I’ll say that maybe there’s an audience for glut, just glut in itself. Of the people who like sharks but don’t love them, there may be a great number who still get dry in the throat when they consider the idea of maximum sharkness. Well, they’d better if they see this film. “You’re Nick, kid,” Li says to Statham. No, that’s “nikk-id.” She’s saying he just has on a towel.

So far The Meg’s China and U.S. box office have been about even. It’s a Hollywood–China joint production and meant for a global audience. Most of the cast is Western and white, but with the addition of the gorgeous Asian woman and her wise dad and cute little girl (who carries three red Cokes in her arms when bringing her mom and Statham together). I think the Asian market is being classy about this. Imagine white audiences reacting to a knockout white girl going dizzy over the non-white star’s massive chest. Meanwhile, the movie’s black guy (Page Kennedy) has a shaved head and sharp clothes, and says things like “You’re dah-yum right.” He’s the one talking up the dangers the team faces, and let’s face it, he gets carried away. The fellow gets rattled. All in all the character has the usual bad hand of a black supporting player in a Hollywood film, but with his situation made naively explicit for world audiences. “Stop talking!” the heroine’s little girl (Sophia Cai) says to him, and he does because she outranks him.

Jon Turtletaub directed, and a long list of CGI technicians made the monster sharks possible. At movie’s end their names slide up the screen a few acres at a time. There are so many that to look at them is to find wonders. Scarlett Poppleton is one of the names, and another is Wendy Cheesebrough Lowe. Ken Ogbo and Effron Heather and Crys Forsmyth took part, as did Georgea State and somebody with the last name of Forehead. The piles of technicians gave us the 75-foot shark, a giant squid’s well detailed suckers, and the sight of a fleet of beefy but regular-size sharks tearing into the football-field flank of the giant shark. They also gave us the endlessly repeated bathers and lime-green life savers in the shark-menaces-the-beach scene, with the beach being as gross and distended as the shark.

The credits thank New Zealand, which makes sense for a movie set in the Pacific. They also speak of “the participation of the Province of Ontario,” but I feel this is a mere film-student wink at the project’s spiritual heritage. Or perhaps I’m negative. As Li’s character tells us, “It’s not only-about-the ones you lose. It’s also-about the ones. You sevv.”