Crazy Rich Asians is a Movie of Discomfiting Vacuity

Hollywood is witless on class issues as a rule, but this is a standout example. C- 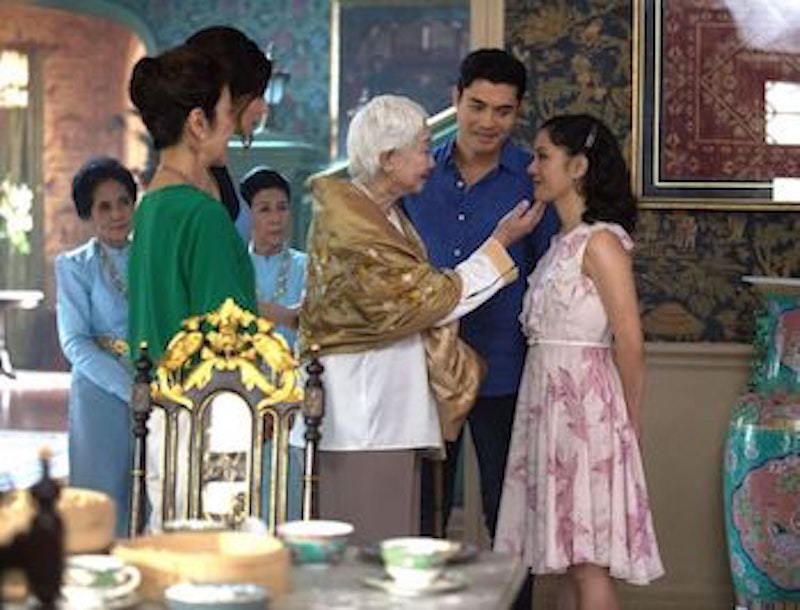 One of the greatest testaments to the power of cinema is that during the height of the Great Depression, many of the most popular American movies were about rich people. It would’ve been enough for audiences seeking escapism to simply make movies about people who were merely comfortable, but no, a lot of these characters were straight-up rich. Logically, one might think this should’ve enraged the masses to the point of revolution, but these films were often skillfully made, and featured classic Hollywood megastars pouring their charisma into their roles. Thus could people who were often struggling to survive identify with those whose position above them was a moral obscenity.

As American pop culture has evolved over the decades, our cinematic relationship to the wealthy has grown increasingly strange. The movie star has declined, as has the studio system which assured a certain level of craft consistency in filmmaking. But personal identification with rich people has only grown, because the movie star and studio system has been replaced by social media, which creates a greater illusion of closeness with famous figures than ever before.

There are still films set against the backdrop of great wealth, but with none of the attention to character work of classic Hollywood. The actors are not called upon to flex much, and directorial effort is mainly put into scrutinizing the opulent details of the lifestyle—the clothes, the jewelry, the elaborate homes and spaces. Fifty Shades of Grey, for instance, is ostensibly about a BDSM relationship but pays more pornographic detail to dresses and parties than sex. And all this goes hand in hand with an unprecedented gap between the rich and poor the world over. Never have the rich had so much and the rest of us so little.

And out of all of this (plus a cynical stab at “progressivism” by focusing on non-white people; have you heard that this is the first Hollywood film in 25 years with an all-Asian cast?) comes Crazy Rich Asians, a movie of discomfiting vacuity. Bringing us into the spheres of the wealthiest family in Singapore, its voracious tour of luxury is continually baffled by half-hearted attempts to make its characters “relatable.” In the old Hollywood model, this would be accomplished through studiously avoiding acknowledging wealth as much as possible, good acting, and lots of banter—1930s films love them some banter. Here the characters are imbued with frankly unbelievable traits. An old money Chinese family still takes time to sit down together and make dumplings. That’s a relatable thing that you can believe rich people would do, right? Romantic lead Nick Young (Henry Golding) is heir to a real estate empire, but he’d rather kick it with some brewskis by a lake than attend a raucous bachelor party. That definitely tracks with everything we know of the ultra-rich!

Our entry into this world is Rachel Chu (Constance Wu), an economics professor in New York who goes with Nick, her boyfriend of a year, to Singapore for a wedding. Starting with flying in opulent first class (on a conspicuously product-placed airline), she gradually awakens to just how well-off her boyfriend and his family are. After suspending disbelief that this is a secret he could keep in the modern age, and then further doing so to buy that the successful maintenance of this secret isn’t a giant red flag for any relationship (hey, he lied because she treated him so normally… without the knowledge of this giant and important dimension of his history and personality), we then see Rachel’s struggle to be accepted by the family as a wider study in Asian and Asian-American relations and cultural differences. Only for select scenes, though. Nothing can distract for too long from the big houses or fast cars.

Director Jon Chu, who’s coming from a long string of dance-focused films, observes all this with a stiflingly inert camera. When Rachel makes a supposedly big entrance at a red carpet, it’s shot without any weight of a big reveal. This movie doesn’t even hungrily lust after the riches it sees, it can only stare, moving from one shot to the next with leaden pacing. This personifies its confused approach to its subject, that it exists primarily as an escapist fantasy yet thinks it can “say something” through bland dialogue, bad jokes, stilted performances, and refraining from stylizing luxury too much. You have, ultimately, a tortured metaphor about an Asian-American confronting their cultural roots. How well it actually captures a specifically Asian or Asian-American experience isn’t for me to say, but I doubt that anyone alienated by the film feels that way because it’s “too Asian” when these characters are blanks.

To make this metaphor, the film tries to get us to believe that Rachel’s cultural identity and not her class status is the biggest obstacle between her and Nick’s family. Hollywood is witless on class issues as a rule, but this is a standout example. Trying to maintain verisimilitude on cultural specifics while ignoring this giant aspect of the setup is ruinous. The film pays enough attention to the dynamics of Singapore that we see the wealthy Chinese characters are served by maids, guards, masseuses, restaurateurs, etc. who are noticeably Malay, Indian, and other minority groups. This is uncommented on. That the movie is sold to appeal to progressive tastes while failing to grapple with these contradictions is absolutely emblematic of contemporary liberalism, which will favor shallow identity-based optics over material awareness every time.