Film Review: The Dirty Violence of The Equalizer 2

I’d hoped The Equalizer 2 would deliver on this theme, but it failed. 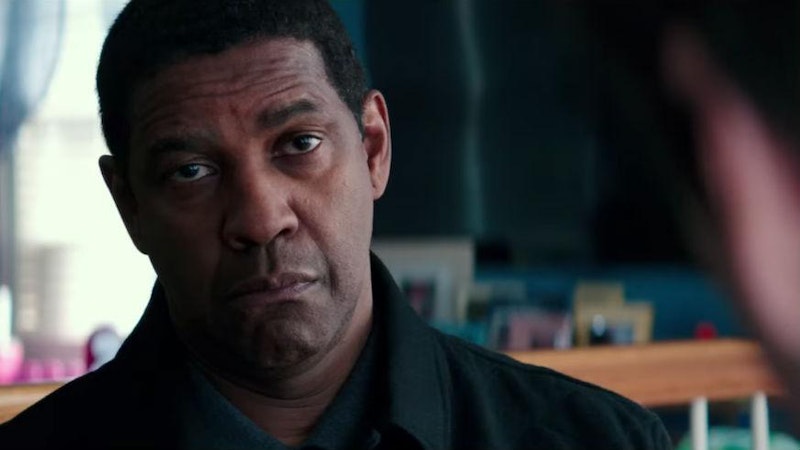 The Equalizer 2 is the first time director Antoine Fuqua and star Denzel Washington have made a sequel. In 2014, when The Equalizer came out, it was all about a manly Stoicism. Now, they've gone woke and have ideas about how to re-think intersectionality. Obviously, our political discourse on intersectionality focuses on power, not justice—the movie tries to reverse this.

The strange thing about the original was fatherhood. The tough old action hero Denzel wasn't just an incredibly efficient killer who timed his kills to see if he’s still got it: he also mentored a young man who needed guidance in order to get the dignity of blue-collar work and manliness as a security guard. He also saved a young woman with a talent for music from prostitution. Both white. In the sequel, he mentors a young black man with a talent for painting, but who's involved with a drug gang. Needless to say, it's a much more emotional relationship.

In the original,Washington was reading The Old Man and the Sea, a book about confronting nature in its formless infinite character. Hemingway's idea is that that confrontation brings out the greatest powers, the excellence of which any creature is capable, fish as well as man. The movie, instead, offers an all-American Stoic who thinks of himself as a protector facing wickedness, rather than nature.

In the sequel, Washington has the young black man read one of Ta-Nehisi Coates' books. Richard Wright's Native Son also makes an appearance. The suggestion is that Coates, although he seems a champion of race grievance and the intellectual face of Black Lives Matter, is in fact pretty realistic, trying to save young black men from the inevitable fate conflict with the white majority would lead to, as per Wright's novel.

There's more than race at play in this movie, but race and history are a good introduction to the problem of heroism and justice. The first act confronts Washington with three different forms of injustice that challenge his role as protector. He's a kind of Travis Bickle playing taxi driver and witnessing American injustice by night, but he's not nuts and this isn’t an existential story. Instead, he plays God, setting right the wrongs that men do.

The first story involves Muslims and an honor culture in which women are treated as property. A woman's child is stolen by her heartless husband and Washington has to retrieve the child. Next, an old Jewish Holocaust survivor wants to retrieve his dead sister's painting, which is denied him by respectable institutions that benefit from the legacy of Nazi evils, because he has insufficient evidence for his own family property. The old man feels he was powerless to protect his sister and would like this one last thing that she loved, so that something is left even of the dead, to be remembered. The final story is about rape culture. Some corporate jocks have drugged and raped a girl and then they discard her in Washingtn's cab—for them, it’s as easy as using a rideshare app. He avenges her honor, does justice, and takes the girl to a hospital.

This is every sentimental ideal of liberal political discourse very thinly dramatized. Race-class-gender all the way. But aside from that foolishness, there’s a logic of these episodes: America is not just America, where you're free to live more or less as you please—there are also pre-modern identities of race and sex that ground injustice and prevent people from acting as autonomous individuals. Washington is confronted with people paralyzed by injustices grounded in these identities and their history in America and who have no recourse to the laws or to society.

What could a hero do in such a situation? Washington gets the child back to his mother, because that's just a matter of a man-to-man fight over who owns the child. America will then allow the mother to love her child. He also educates the young black man to discard his self-pity, sense of grievance, and to discipline himself in order to overcome the injustices perpetrated by the white majority. But that's about it.

This redefines intersectionality, shifting from the question of power: Who is oppressing whom? to the question of justice. To understand how important this shift is, notice that the power and oppression question feeds our obsession with inequality—the original movie seems hilariously prescient about the current liberal hysteria about Russia.

In contrast, the justice question is about how equality is the dominant fact in our lives and how it causes us to be powerless. We’re all the same, so no one among us is sufficiently great to take on the mantle of heroism. The problem in this new formulation is that we don't have heroes to take our burdens on their shoulders. In fact, we end up admiring inequality, because we need it to overcome injustice, if only at a personal level.

The movie’s then ruined by its stupid plot—Washington finds out that his old buddies in the CIA have become evil mercenaries. Who cares about that? I would’ve preferred a Ta-Nehisi Coates rant, all anger and grief at the race problems. The sequel is a much worse movie than the original because of this CIA-mercenary plot, but it has a much better idea at its core, which shows that these artists have done some hard thinking about the problem of protection for the innocent.

The original Equalizer was about whether Washington would do the right thing and protect all these white people from their Russian oppressors. That's worthless sentimentality and it summoned all the cruelty of graphic depiction of murder. The third act had a horrifyingly earnest Home Alone murder sequence, where gardening tools and domestic appliances were used to kill Russian mercenaries. This is what Ingmar Bergman called dirty violence, of a pornographic character.

The sequel is about whether anyone in America can act for the good of others or, instead, self-interest and the principle of moderation. Mind your own business, doom us to loneliness and a kind of despair. If each of us minds his own business, who will protect the needy? This question of who will step beyond his private life and act for the public good will come back in our politics and pop culture and it's one of the few things, along with fatherhood and the authority of the protector, that our old action stars can deliver which no one else in Hollywood dares touch. I’d hoped The Equalizer 2 would deliver on this theme, but it failed.