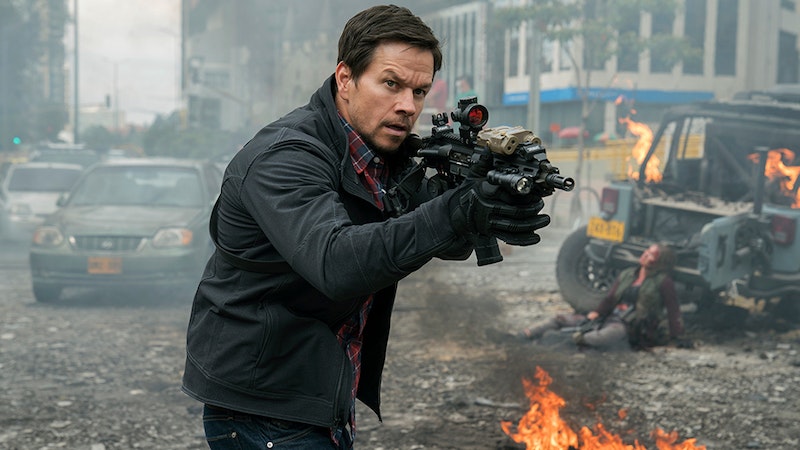 After several years of teaming up to tell true-life stories of American blue-collar heroism in the face of liberal officiousness from Boston to Afghanistan to the Deepwater Horizon, director Peter Berg and Mark Wahlberg return to the realm of fiction with the new spy thriller Mile 22.

Lone Survivor, Deepwater Horizon and Patriots Day, for whatever their faults, got away from two of Berg’s worst tendencies from earlier in his career: The use of incoherent shaky-cam in action sequences, and the need to raise troubling questions about morality and geopolitics without saying anything about them.

These tics both come roaring back in Mile 22. The action sequences, even by Berg standards, are a mess, with the camera flying everywhere and no sense of spatial recognition in any room. And while the film raises some fascinating ideas about surveillance, drone strikes, and aggressive foreign intervention, it approaches these subjects with no point of view to speak of. Also, the movie is almost exactly 90 minutes. Mark Wahlberg talks for about 87 of them.

Overall, Mile 22 is bad, but it’s at least bad in an interesting way. The film opens with a deadly invasion of an idyllic suburban home, by a paramilitary team led by Wahlberg, Lauren Cohan, Rhonda Roussey, and others. That the invaders turn out to be the film’s heroes is the first of several morally gray areas that the film presents to its audience without addressing their meaning.

After an opening credits sequence lifted directly from Homeland—including speeches from the last several presidents—the bulk of the film takes place in a fictional, Indonesia-like Southeast Asian country. Wahlberg’s team of CIA-style paramilitary types is seeking to stop a series of terrorist attacks, until political dissident Li Noor (Iko Uwais, from The Raid movies) tells them he can unlock the code to stop it, but not until he gets asylum and an escort out of the country.

The title is a reference to how many miles the team needs to take Noor to the departure point, which is beset by gunmen, most of whom don’t have names or faces.

In Mile 22, after most scenes, we’re treated to overheard surveillance of what we just watched. In more than one case, it’s more coherent than what we just saw in the actual scene.

What’s really going on in this movie is what’s happening below the surface. The team, led by handler John Malkovich, uses a lot of the tools of American empire: video surveillance of the whole world, drone strikes, and the ability to come and go as they please, with strong and powerful weapons, in broad daylight in a country with which they’re not at war. The team not-so-subtly acknowledges this, by decorating their workspace with bobbleheads of the last several presidents of the United States, the ones who regardless of party have moved to expand those powers.

What conclusion does the film draw about this? Is Berg, a noted admirer of all things military, arguing that U.S. imperial power has gone too far, and should the film’s ending be construed as a cautionary tale about its shortcomings? Despite a lot of mumbo jumbo, most of which it puts in Wahlberg’s mouth, the film doesn’t really offer any conclusions.

Acting-wise, the MVP of the movie is Iko Uwais, the Indonesian actor who’s a major presence on screen. On the same weekend that Crazy Rich Asians is shattering stereotypes about Asian masculinity on screen, here’s Uwais, whose character is a genius coder and a total badass. In one scene, he punches out a glass wall, picks up the broken glass with his bare hands, and throws it at his foe.

As for Wahlberg? Either he’s yelling at subordinates, or he’s giving long speeches about history and geopolitics, including as part of a flash-forward framing device that the film keeps forgetting about for long stretches. He’s using a slightly different accent than usual, with more of a Mid-Atlantic tint than his usual Boston, but he’s as motor-mouthed as ever—it’s like an entire movie made out of that moment in The Departed where Wahlberg snaps “I’m the guy who does his jawb! You must be the other guy!”

Peter Berg has implied in interviews that Wahlberg’s character was based, at least in part, on Steve Bannon. Which makes sense, as the character is also an insufferable blowhard who isn’t nearly as smart as he thinks he is (though there’s no evidence presented that the character is a raging racist.) The Bannon story shows once again that Berg’s media interviews are almost always more entertaining than his movies.

Roussey, the MMA star, doesn’t get a lot to do, while Cohan’s character is also going through a divorce, meaning that she’s always communicating with her ex-husband (played by Berg himself) through a special divorce app. It’s an amusing idea that’s out of place in this particular movie. There’s also one scene in which Cohan and Roussey talk to each other and it almost passes the Bechdel Test, if only they didn’t spend the entire scene talking about Wahlberg.

I don’t want Berg and Wahlberg to get back to their fact-based heroism routine, although I suspect they will—the Philadelphia Twitter character @FanSince09 spent a whole day a few weeks ago plotting out a fake movie about Wahlberg going to Thailand to rescue those kids from that cave. But whatever Berg does next, I hope he develops a solid point of view and holds the damn camera in place.