Blumhouse's Truth or Dare and the virtue of dreck. 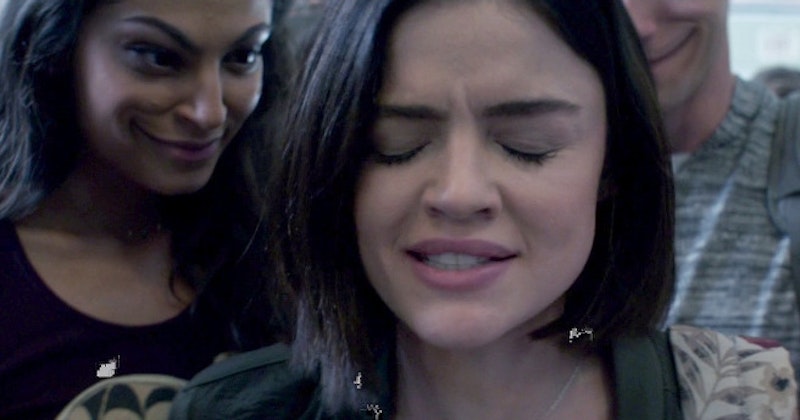 This is the first in a series of posts on Blumhouse horror films.

Quality in art can be a straightjacket. Production values, big name actors, meaningfulness and the triumph of virtue—A-list Hollywood films need the right message, the right look, and most of all, the right box office. With all those hoops, it's no wonder that so many films jump through them in the same order in the same way. Once you've made that investment, you need to make sure that everybody’s willing to pay for it.

B-movie exploitation schlock has a lot more leeway. Blaxploitation films, women in prison films, and horror from the 1970s and 80s had to deliver, variously, gore, violence, T&A, and genre pleasures. But after that, they could do more or less whatever they wanted. With low audience expectations and low up-front monetary investment, there's little risk if you want to turn your rape-revenge film into an explicit orgy of feminist rage and misandry as in Ms. 45 (1981), or if you decide to mash up your vampire film with a martial arts picture and treat it as a celebration of interracial romance. When the stakes are low, it's easier to gamble.

Truth or Dare, the Blumhouse productions horror film released earlier this year, was universally panned for being blatant derivative crap. And, it's true—the film revels in the obviousness with which it checks off its genre boxes in the laziest possible way. The hand-me-down plot features a bunch of stereotypical teens (the hot guy, the slut, the dutiful one, the dudebro jerk) on their last spring break in Mexico. They end up in a church playing a game of Truth or Dare, and then the game turns out to be haunted, and they have to keep playing it when they return home, for higher and higher damages. If they refuse to play, they’re murdered in efficiently low-budget fashion; the demon possesses them and makes them kill themselves. (Demon possession involves growing a stupid malevolent grin; it looks like a bad Snapchat filter, as one of the protagonists points out.)

The Truth or Dare conceit is brilliant in its no-frills, idiot savant meta-efficiency. Horror films are sadistic enterprises; they're all about taking their characters, pushing them into that abandoned house, graveyard or attic, and then terminating them. The Truth or Dare game lays bare the mechanism with half-assed aplomb. It's as if the director (Jeff Wadlow) has decided to film himself ordering the actors around. Why would this person crawl out onto the roof and risk her life? Well, you dared her! Why would this character humiliatingly reveal that her best friend is cheating on her boyfriend? Well, she picked truth.

Thus the much-maligned twist ending, in which earnest heroine Olivia (Lucy Hale) saves herself and her friend by recording a viral video in which she asks people "Truth or Dare?" forcing the watchers to play too. It's a cop out, perhaps. You surf to some video fiction, enjoy the packaged pain, and then move on to similar cultural detritus. A higher budget production would have to pretend to have meaningful closure beyond self-perpetuation. Truth or Dare doesn't need to bother.

Horror films aren't the only sealed, iterative games that the film’s sneering at, though. Inside the dumb demon possession plot, there's another, more unsettling story. The main relationship of the film is between Olivia, a boring do-gooder, and her best friend, the wilder, sexually irresponsible Markie (Violett Beane). At first, the main conflict between them involves Markie's good-looking, boring boyfriend. She cheats on him, Olivia’s in love with him; he has feelings for both of them. But eventually it becomes clear that the boyfriend is irrelevant. What's really at stake between Olivia and Markie is sexual violence.

Markie's father committed suicide some years before the beginning of the story. Shortly before he did so, we learn, he tried to rape Olivia. She escaped, but told him (understandably) that she wished he'd die. He killed himself, and Olivia has been keeping the secret ever since to protect Markie.

Olivia's silence is mirrored in the plight of the Mexican nun who summoned the demon originally to stop a priest from assaulting and raping her sisters. In order to stop the demon after it had killed the priest, she had to cut out her tongue and seal it in a jar. Both Olivia and the nun recognize that it's up to the victims of abuse to save the world through their silence.

That’s precisely what victims of abuse are often told. Powerful people—presidents, studio executives, leaders, fathers—are the important ones, imbued with public love and respect. To accuse them is to topple not just an individual, but a faith and a promise; it wrecks the world.

In the first round of truth or dare, before the demon possesses the game, one of her friends asks Olivia to choose hypothetically between killing all her friends and all of Mexico. She chooses Mexico. The good of the many outweighs the good of the few, as a famous big budget movie put it.

That's the conventional morality of Hollywood; the hero is supposed to sacrifice himself (or herself) for a higher cause (though of course that sacrifice always ends up benefiting the hero too in the end.) And it's also the conventional morality of Hollywood, where each little person is supposed to sacrifice themselves so that the bigger game of deals and visions can keep running on, uninterrupted.

For years, Olivia follows the script; she sacrifices herself for Markie, but more precisely for Markie's father, who assaulted her, but is too important to be called to account. He is, effectively, the demon, who still haunts his daughter and his victim. His video image is even possessed by the demon; it urges Markie to kill herself.

Olivia eventually exorcizes the demon by deciding to stop sacrificing herself. First she tells Markie about what happened, in order to save her own life. And then, to protect Markie, she decides to unleash the demon on everyone who watches her video. "I choose you over the world," she tells Markie. To save her sister and herself, she's willing to kill you, right there, watching, and everyone else. That's not what heroism is supposed to look like. But Truth or Dare's a worthless enough movie that it's able to see heroism from the point of view of people who are supposed to be worthless, too.