Movie based on creepypasta icon a dud. 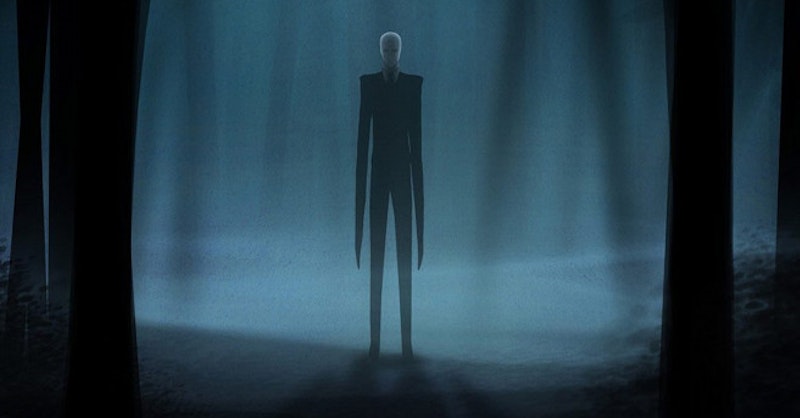 “At the least font looks nice,” I said when the Slender Man title card appeared. Seeing a Slender Man movie post-2014 is an anomalous occurrence. The creepypasta icon is no longer in vogue. Slender Man is, above all else, a movie that arrives instantly dated. But even if it were judged independently, the film lacks any quality to make it an enjoyable viewing experience.

Someone on the production team was made aware of the idea of concealing the monster in darkness, but without clarifying that this doesn’t need to apply to every scene. Almost every scene is shrouded in darkness. Even in the opening daylight shots, the protagonists are covered by shade. The viewer must squint to make out anything on screen.

The narrative plays out like typical horror fare, the titular Slender Man systematically hunts down several interchangeable high school girls after they summon him from a haunted “website video,” obviously wishing to avoid referring to YouTube for copyright reasons. Ritual sacrifices of beloved objects, library scenes, and the inevitable hospital freakout scene, are presented without awareness or subversion.

The film doesn’t waste time, everything’s kept at a brisk pace. There’s residual evidence of deleted scenes, likely to bring the rating down to PG-13. It avoids being purposely bad, remaining instead a dull but inoffensive movie. But perhaps the largest frustration of all is that the ending narration hints to a much more interesting premise than what was delivered.

The film vaguely attempts a theme by describing Slender as a viral monster, one who infects people's minds through seeing him online. At the time, I asked if this was a representation of meme culture. This shapes our current discourse, which selects for transmissibility as opposed to accuracy or nuance. These images are far more powerful than most of us care to admit, and many of have been influenced by it without even knowing. Immediately, my mind conjured up the idea of seeing the horrors of meme culture weaponized for nefarious purposes, such as the alt-right's rise to power through its use. But by the time I got enthusiastic about this idea, the credits rolled.