The Man From U.N.C.L.E. Pretends Other Countries Matter

But really America is all there is. 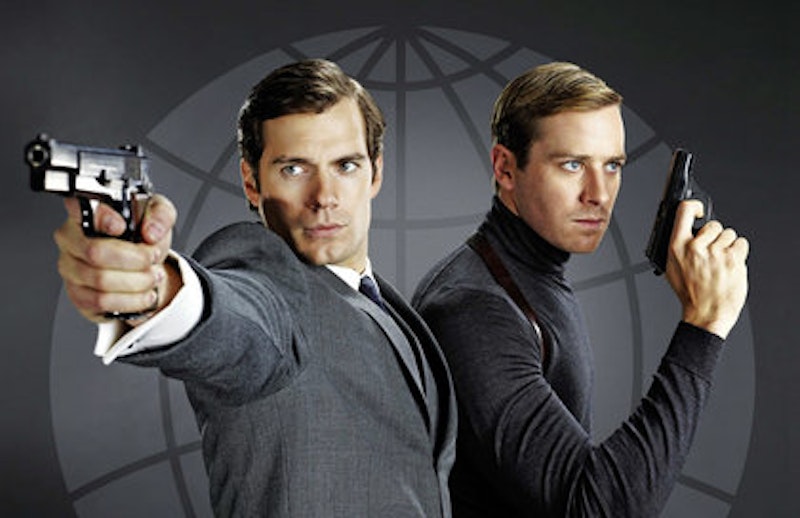 The opening chase of Guy Ritchie's The Man From U.N.C.L.E is oddly ambivalent. The hero is the suave, raffishly immaculate American criminal-turned-spy Napoleon Solo (Henry Cavill). The film is in love with the unflappable smoothness with which he gets Gaby (Alicia Vikander) out of East Berlin. But Ritchie also adores the chase scene's villain, Ilya (Arnie Hammer); who is presented as a kind of superhero. He dodges bullets, runs down Solo's car on foot, and tears off the back of it with his bare hands.

Usually, you know whom you're supposed to sympathize with in action films; the whole genre is built on cheering on the carnage committed by the star and booing that committed by the bad guy. But here, you're clearly meant to admire two antagonists at once. What sort of action movie is this, anyway?

The answer is, it's an action movie nostalgic for a world in which there wasn't just one good guy. The film is set in the early 1960s during the Cold War, but its emotional commitments are to an even earlier period. Specifically, the film replays World War II. The bad guys are those old familiar Nazis, trying once again with their German accents to destroy the world. And the good guys are… well, everyone else. Solo is an American; Ilya is a Russian; Gaby is herself a German, but a good one—and then British intelligence shows up later along the line.

The film essentially recasts the Allied forces as a buddy film; the irresponsible, amoral, but at bottom decent and hyper-competent American is paired with the dour, uptight but at bottom decent and hyper-competent Russian. They are rivals, but they must work together. Hijinks follow, against the backdrop of East Germany, Italy, and various disputes about fashionable attire.

World War II was disastrous, and recasting it as a winking farce requires a certain amount of rejiggering. The Nazis are oddly but conveniently devoid of racial prejudice; they've been turned into simple Hollywood world domination types, without all that messy genocide nonsense. Naturally, recasting the war without the war erases everyone else's war crimes too. Napoleon Solo seduces willing Italian hotel personnel, rather than firebombing Dresden. Ilya's family was brutalized by Stalin, and he’s threatened with Siberia himself—but then the threat dissipates, without much clear reason as to why, except that it's a cheerful-ending kind of spy movie, not a bleak amoral John Le Carre riff.

What's interesting is that the whitewashing of the past is not done in the name of Greatest Generation moral certainty and purpose. Rather, Man From U.N.C.L.E. is nostalgic for a time of less clarity—or at least of less unity. One time, back there, Ritchie says, Americans weren't the epitome of goodness. Solo's name is "Solo," but he doesn't actually work alone. For all his immaculate self-assurance, he needs Ilya to save him, at least occasionally. Ritchie's exuberant split screens are a winking metaphor for a multi-polar world. And then there's the brilliant scene where Solo eats a luxurious meal while in the distance Ilya is chased in a boat by Nazis. The film has more than one center, more than one protagonist, more than one motivation. And that's not seen as dangerously gray or grim; it's fun, joyful, cosmopolitan. The world is a better place when it has more than one person, and more than one country, in it.

Ritchie's sophisticated, multi-character drama says the world will be saved with wit, invention, and complex cooperation. Which is why it feels dated, and is struggling at the box office. This adult view of international relations and heroism is behind the times. The blandly juvenile Mission Impossible films seem more relevant and realistic. In that world, American spies don't appreciate the nuanced pleasures of the Old World. Instead, they romp obliviously, using foreigners as props. There's only one good guy. He has no fashion sense, nor any love life you'd want to show on film. He has no friends. His homogeneity is unruffled. No one saves him from it.