All the Mission Impossible films, ranked. 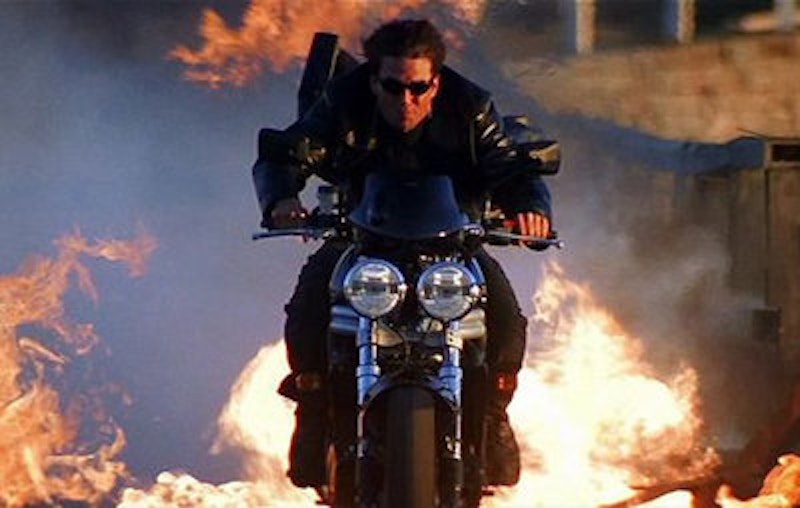 I watched all five Mission Impossible films in three days. By day two, they'd all blurred into a relatively undifferentiated bolus of explosions, cocky smiles, acrobatics, and more explosions. None of the Mission Impossible films is great; none are truly awful; they occupy that action-movie middle ground of competent genre product delivered with a minimum of personality or fuss.

Still, it’s possible to tell the films apart if you really try. Here then is the definitive list of Mission Impossible quality, from worst to best.

5. Mission Impossible: Ghost Protocol (2005): The fourth installment is the longest Mission Impossible film —or at least it felt like the longest. There are some nice set pieces: climbing the tallest building in the world in Dubai; a car chase in a sandstorm. But the villains are too bland to register, and, in a desperate effort to make up for the lack of evil, all the main characters are loaded down with obligatory self-actualization plot arcs. Even Jeremy Renner is sheepish as he wanders through his… and poor Paula Patton. Mission Impossible as a rule is at a loss as to what to do with its female leads, but Patton gets a raw deal even by the series' low standards; her job appears to be to fail over and over and to look uncomfortable doing it.

4. Mission Impossible 3 (2006): J.J. Abrams sets the series' signature non-style style in the third film. Points added for Philip Seymour Hoffman's Joker-without-the-makeup bad guy oozing-joyful-malevolence. Points subtracted for the bumbling effort to put Tom Cruise in a domestic setting via the suburban romance with a game but nonetheless irrelevant Michelle Monaghan. Overall, there's more suburban romance than Hoffman, which is why it's so low in the rankings. Still, the film's very frictionless mediocrity makes it in some sense the most characteristic installment in the series.

3. Mission Impossible: Rogue Nation (2015): There's really not much to choose between the fifth (and so far last) installment and the third. Both are largely characterless action films—the sort of thing that seems to have been created by a Platonic Hollywood focus group. I'm giving Rogue Nation the edge because it dispensed with the stupid domestic romance of three and instead managed to cast an honest-to-goodness female lead with something to do.  Superspy Ilsa (Rebecca Ferguson) is a double or triple or quadruple agent with marginally believable motivations and kick ass action sequences. As a bonus, she isn't required to have a gross romance with Cruise, who’s 20 years her senior.

2. Mission Impossible (1996): The first entry in the franchise, directed by Brian DePalma, is quite different in tone from those that followed. Most of the series is a kind of blandification of James Bond; this one is a blandification of John Le Carre. The script is mean-spirited and sordid; it's the one entry that deliberately and gleefully kills off endless agents, and also the only one in which Cruise is sexually compromised (though the movie is reticent about showing this explicitly). Emmanuelle Béart as the sexual compromiser brings a mix of sensuality, innocence, and subterfuge that the series was not to see again, while Jon Voight as the mentor is bracingly cynical. The plot even has some coherence; it's not just one thing after another, but rather works as a marginally entertaining whodunit. This is as close as the series comes to anything that might be termed a conventionally good movie.

1. Mission Impossible II (2000): Putting this here is a controversial choice; John Woo's second installment in the series is often seen as the worst rather than the best. And there are certainly problems. To say that Cruise and female lead Thandie Newton lack chemistry is an insult to the Periodic Table; their scenes in bed are more vertiginously nauseous than any of the series' high-altitude stunts. Setting aside that significant caveat, though, it's joy to watch Cruise's manic self-regard inflated to heretofore implausible bombast by Woo's flamboyant portentousness. A sequence in which doves fly in front of Cruise as avatars of his goodness made me laugh, as did the climactic battle on a beach, in which the best martial arts scene in the series is juxtaposed with mighty waves beating upon the coast. Woo's choreographed violence is staged with visceral delight, and makes the rest of the series' effects seem mired in drab pragmatism. This is hardly the best Woo film out there, but there's a special delight in seeing his campiness lathered onto such a mindless Hollywood vehicle.