The End of the Tour perverts and distorts David Foster Wallace’s sensibilities. 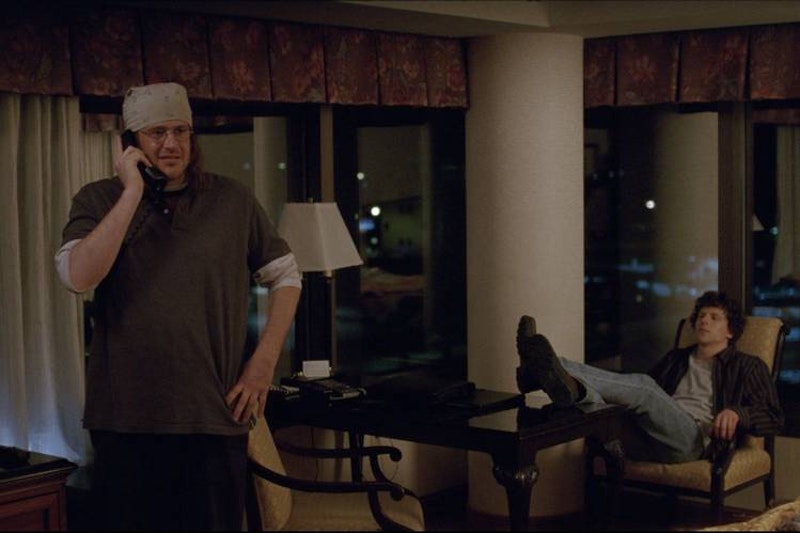 David Foster Wallace is writing a dissertation in shadowland, considering a second suicide with the release of The End of Tour, a sickly sweet and overly earnest take on the relentlessly cynical and morbid author. Wallace’s work is overwhelmingly bleak and depressing, and it always was—that’s not an opinion colored by his death. As with all martyred artists and the work about them that follows, there’s so much in here that would’ve made its subject recoil. Luckily, this isn’t a life-spanning biopic; Rolling Stone reporter David Lipsky followed Wallace around on the last five days of the book tour for Infinite Jest in 1996, and after Wallace’s suicide in 2008, Lipsky cashed in with Although of Course You End Up Becoming Yourself, transcripts of all his cassette tapes for an article that never got published. Lipsky published a novel that went nowhere right when Infinite Jest was acclaimed by everyone who had the patience to read a 1000-plus page postmodern epic. Jesse Eisenberg, who is typecast again as the creepy and jealous nerd, dismissive, paranoid and unlikable, plays Lipsky. He’s a pain to watch, but that says more about Lipsky than Eisenberg. I will say it’s obvious from the first drag that Eisenberg doesn’t smoke and doesn’t know how to fake it.

Jason Segel does a pretty decent DFW impression, but because it’s Segel, it feels like the whole thing might bust out into a Saturday Night Live skit at any point. Segel has the mannerisms and vocal tics down, but constantly looks like he’s dressed up for an extremely pretentious or sophisticated Halloween party, bandana and grandma glasses and all. The End of the Tour avoids being a complete disaster because most of the dialogue is straight from these horses’ mouths. But there’s a lot of material in Lipsky’s book and nuance in Wallace’s work: the feel-good college commencement speech, NPR-approved outlook of this movie is completely out of step with Wallace’s warnings about being pacified and comfortable consumers of content. The End of the Tour dumbs down its message to “Be a good guy,” an after-school special declaration so vague and open-ended that it lets the viewer off the hook, and colors it in the most clichéd epiphany-core muzak that belongs in Honda commercials and Converse ads. Kurt Cobain performed “Smells Like Teen Spirit” as a muppet four years ago, and now the first dramatization of David Foster Wallace ends with him dancing slow motion in a sun-bathed Baptist church.

The End of the Tour is enjoyable to watch, but it’s no surprise that DFW’s estate has disavowed the movie. It’s a typical perversion of a dead artist’s intent into the most crowd-friendly version possible. Lipsky is just pure slime, insanely jealous of Infinite Jest’s success, and paranoid about Wallace and the way he presents himself to others, and how much of it is a smart guy dumbing himself down for other people, bringing rocket launchers to rock-paper-scissors. There isn’t much more unpleasant than watching a jealous, less talented writer try to start pissing contests, and Eisenberg pulls off full-creep with ease, but gets zero sympathy. Wallace isn’t aloof, he’s just annoyed by Lipsky being an obnoxious and insecure shit. Wallace is dead, and his ghost is public domain, mouth open for words to be poured in that never came out. Even though the movie comes directly from Lipsky’s audiotapes, it’s shaped like a cushion instead of a mortar, and as a fan, it’s just a drag.