Noam Baumbach’s Mistress America is too nice to its repulsive characters. 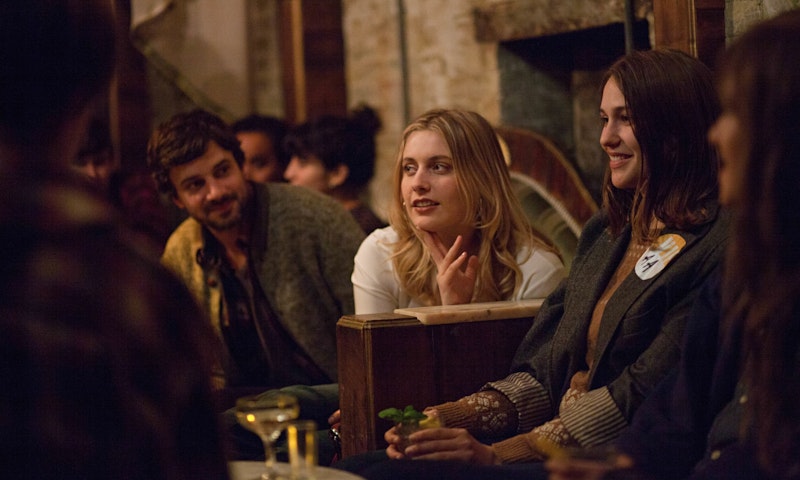 Mistress America might be the meanest movie Noah Baumbach or Greta Gerwig has ever made. Ten minutes in, I found myself in disbelief—how could these characters be even more unlikable than those of the fishy Frances Ha? Baumbach and Gerwig’s honeymoon movie was out of touch and full of hollow sentimentality for a New York that doesn’t exist anymore. Though I believe they both feel that nostalgia in their bones, it rings false outside of that beautiful bubble of affluence in New York City. Frances Ha was also instantly dated by Lena Dunahm’s Girls, a much more abrasive and contemporary take on the done-to-death “young person in the city” premise that Baumbach and Gerwig wrote a love letter to rather than update. Mistress America quickly reveals itself as a screwball comedy that despises the people in it. At least I hope so.

Tracy (Lola Kirke) is a bored Columbia freshman, unlucky in love and insecure about her writing (sigh)… After getting giddy about a ninny in her lit class, literally flirting riverside, only to have him show up holding hands with a new girlfriend days later, she calls her soon-to-be step-sister Brooke (Gerwig) out of late night diner loneliness, not knowing what to expect other than sophistication. Brooke is bizarre and barely that—she considers living in Times Square hip, and she introduces herself to Tracy by ambling down a staircase trying to look elegant but instead coming off like someone who belongs in a home. Brooke is a disaster, completely clueless and hysterical. Tracy is deeply endeared, but there’s only so much the audience can get from a cartoon character. Throughout Mistress America, I couldn’t figure out how much we were supposed to recoil at Brooke and everyone else but Tracy—hilariously and hopelessly out of touch and unaware of themselves. Tracy is the straight player, and her mild annoyance at Brooke’s histrionics and the situations she throws her into is overpowered by her affection for her lovable fuckup of an almost step-sister, “the bonfire to everyone’s matches.”

It’s that last line of the movie that betrays too much sympathy and sincerity in Baumbach and Gerwig’s script—that we’re supposed to go golly at this woman “with no follow-through” or any better ideas than opening up a restaurant in Williamsburg, which is also something of everything else, a hair salon, a community center, a bookstore, “the place you want to be.” Baumbach and Gerwig expect us to feel for this poor hustler with zero self-awareness and no noble ambition with love instead of revulsion. This movie is silly and zippy enough to make the mocking present at all times, but it’s the sort of in-family rib-bruising criticism instead of the brutal realism that these irritating and useless people deserve. Though not nearly as earnest as Frances Ha, drowning in honey and goo, Mistress America is still too nice to its characters.