Good and bad in the cineplexes as summer winds down. 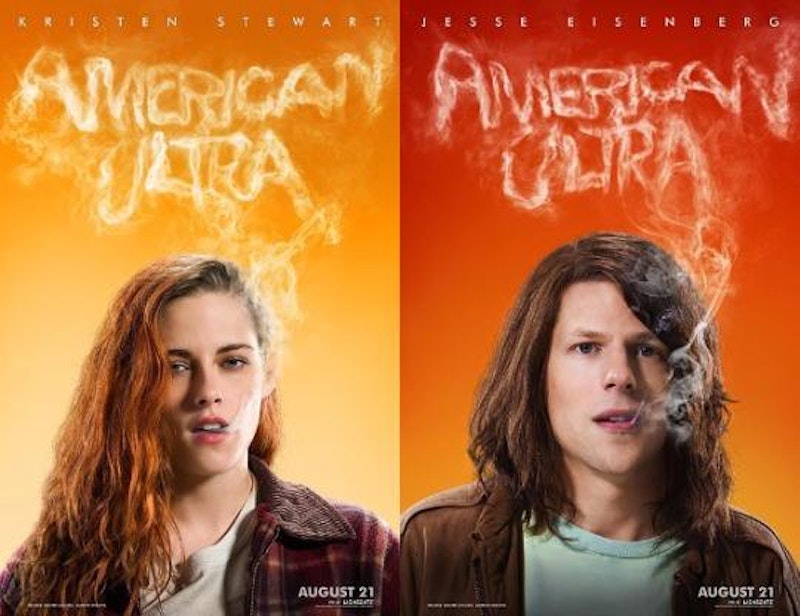 Deep into summer, rollercoasters and tentpoles keep popping up in suburban cineplexes, selling popcorn and gun battles for rally and rattle. Time is running out to catch the William F. Buckley/Gore Vidal documentary Best of Enemies at The Charles, so for our family weekend theater ritual, we chose Guy Ritchie’s update of the 1960s spy series The Man from U.N.C.L.E. and stoner thriller American Ultra. Neither tries to offer anything other than the easy-breezies, and the only other things they have in common are covert government ops and dozens of people getting shot and stabbed.

Ritchie’s film covers familiar ground: even though the original series isn’t as well known or ubiquitous as James Bond or Jason Bourne, his film is snappy and snazzy, full of well-dressed assassins with super-human precision and quick wit. Bourne always bored me—too serious and up its own ass, staring at a man I’ll always think of as a retarded puppet parroting his own name over and over. I love James Bond, especially the Pierce Brosnan ones I grew up on, but totally checked out when Daniel Craig filled in 10 years ago (Bond is not a blond). Idris Elba though, front row. Most post-9/11 spy movies have been dogged in drab colors and grim, overly serious tones. At this point, after the offensively misguided, brutal, and bad Zero Dark Thirty, Ritchie’s remake is a welcome reminder of my Bond-obsessed childhood. The closer to Spy vs. Spy, the better. I don’t want to see a contemporaneous dramatization of cable news. The movie moves at a clip with no drag at all, and despite plenty of casualties, it’s silly and light-hearted, a sunny distraction set fifty years in the past, a welcome escape.

American Ultra comes up short of its meager order, sunk by a shit script, bad CGI, and a half-baked plot full of teases unexplored territory. It’s a good premise, a slight reprise of Pineapple Express: stoner couple finds themselves caught in a conspiracy with people out to kill them—this time it’s the government instead of a drug cartel. Jesse Eisenberg and Kristen Stewart make for an unlikely duo, especially since Eisenberg looks like a horse hit over the head with a shovel. This is not a drug movie or a stoner comedy—the drugs are incidental and gimmicky, since this was marketed like Pineapple Express: stoner thriller. I’ve got a Jesse Eisenberg problem—he’s been typecast as Mark Zuckerberg, and ever since The Social Network, he’s basically played Michael Cera’s creepy and deeply uncool cousin. I could watch Cera in anything, but Eisenberg sours just about everything he’s in because he’s so good at playing a repulsive and needy nerd. Once again, he doesn’t smoke and doesn’t know how to fake it! Kristen Stewart is fantastic as always but can’t save this script—the whole “You’re the car and I’m the tree!” thing is incredibly embarrassing.

The saving grace is Topher Grace, who I’ve always enjoyed, and haven’t seen enough of since That '70s Show ended. He played nice all too often, and it’s a thrill watching him play a mean and murderous CIA agent, just as much fun as it was to see Michael Cera play a leering, track-jacket wearing coke-head in This is the End. But American Ultra just falls apart, with too much going on and introduced without any further development.