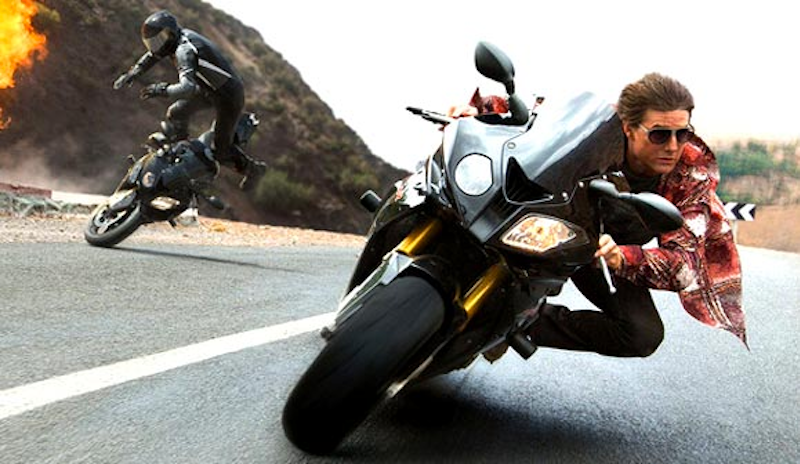 Early in the latest Mission Impossible film, Rogue Nation, the aging but not greying Ethan Hunt (Tom Cruise) meets a young female contact (Hermione Corfield) in a record store.  After they exchange knowing quips about John Coltrane and Shadow Wilson, she hands him his secret message in the form of a vinyl record, and then, breathlessly, tells him how wonderful he is. "All the stories about you can't be true…can they?" she stutters. Cruise-as-Hunt pauses without speaking, giving her a self-satisifed grin that says clearly, hey, I'm an awesome movie star and/or superspy. I am pleased that the script has recognized that women decades younger than me should fawn at my feet. All is right with the world.

And then that fawning record store clerk is murdered brutally in front of him while he watches helplessly. He's not an awesome superspy. He's just a smug twit whose unearned assurance results in death and bloodshed wherever he goes—while he himself is unscathed. Why doesn't someone kill him already?

Of course, throughout Rogue Nation, and for that matter throughout the two-decade-long film series, people do try to kill Ethan. You're supposed to root for them to fail… or are you? Rogue Nation makes you wonder. The plot pits the Impossible Missions Force, led by Hunt, against the Syndicate, an "anti-IMF"—a collection of agents disavowed from the world's spy forces.

Throughout the film, the IMF and the Syndicate are presented as parallel and equivalent. That first vinyl message is from the Syndicate rather than the IMF, as it turns out. The characterization of the Syndicate as a "rogue nation" also (deliberately) applies to the IMF, which continues to operate secretly within the IMF even after Congress closes it down. Agent Ilsa Faust (Rebecca Ferguson), who may be working with the Syndicate or with the IMF or both, argues, convincingly, that there's not much to choose between them. "They're all the same," she says of the vying secret agencies. "We only think we're fighting on the right side because that's what we choose to believe." She's right too. "There's always people like [Syndicate-head] Lane (Sean Harris) and there's always people like us to fight him." What's the difference? Lane used to blow people up in the name of the status quo; now he's doing it, he says, in the name of "change." Even if you do prefer the status quo to change, dead folks are dead; they don't care in the name of what nebulous ideology they've been killed.

Other films in the series play with similar insights. Ethan is constantly fighting moles within his own agency, and/or disgusing himself as his villainous counterparts, or stealing the super deadly information from the government for the shadowy organization he plans to betray any moment now. In the secretive world of spies, the "good guys" are constantly threatening to turn into bad guys, so you wonder whether the world wouldn't be better off without the good guys in the first place.

The thing that keeps you on the side of the good guys, the thing that distinguishes bad from good, isn't so much motivation or methods as Cruise himself. He's the star oozing action-hero charisma and boyish charm, even as a fifty year old. He's the Hollywood protagonist — you're supposed to love him, like that record clerk, and end up rooting for the Western righteousness he represents.

But what if you don't like Cruise? This is hardly an academic question; the world is filled with Cruise anti-fans. His manic self-regard, his creepy involvement in Scientology; the way he clenches his jaw to show earnest determination. He's a hero you love to hate. In the second Mission Impossible, the evil villain rants at length about wanting to wipe the stupid grin off Ethan's face. I overly related.

And that's the brilliance of Rogue Nation, if brilliance is the word. The film is a passionate call for less supervision of spy networks. It lauds American hegemony, not just over imperial possessions, but over Britain and Europe. The Brits are responsible for the Synidcate; the Americans have to bail them out, even to the point of drugging the Prime Minister and framing a cabinet officer. Raffish Tom Cruise knows best for everyone; pledge allegiance to the smirking America, world, and all your problems will be solved.

But all of that collapses in on itself if you just let yourself hate Tom Cruise. Suddenly, Ethan isn't the hero—he (and the country he represents) is an out-of-control narcissist with limitless ammo and no accountability. When his teammates accuse him of turning his mission into a deranged personal vendetta—they're not failing to see his greatness, they're right.

From this perspective, Rogue Nation isn't a standard action movie in which the good guys are challenged and struggle and eventually triumph for virtue and stability. Instead, it's a dystopic vision. This evil, self-satisfied, unhinged superguy whooshes back and forth across the world, sowing chaos and insufferable cockiness in his wake, and no one can stop him. Bullets, bombs, Congressional subcommittees, common human decency—he ignores them all. Tom Cruise rules the world in the name of Hollywood stardom, self-regard, and the American way. Stopping him is a bleak, impossible mission. Look at that jaw clenching, filmgoers, and despair.