I Go Pogo Still Relevant as Ever 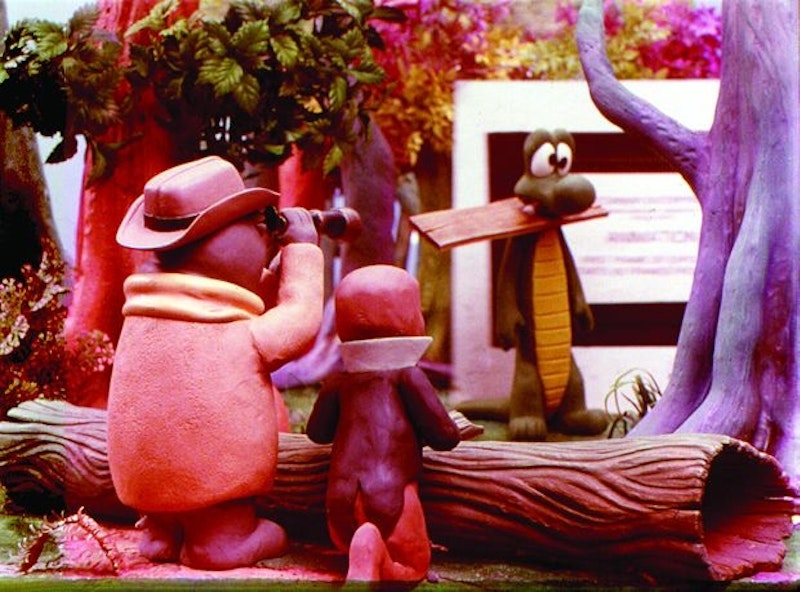 “Nobody meant to make a mess of it all,” shrugs Len Maxwell in the intro to the largely forgotten 1980 claymation movie I Go Pogo. “It just seemed to work out that way.” Until this week, I’d no idea that Walt Kelly’s Pogo had been adapted into a feature film. As it turns out, that was because it was largely awful—full of dodgy slapstick and half-hearted adaptations of storylines from the strip—but while watching it on YouTube with a fellow fan, we came to realize that Maxwell’s opening line wasn’t the only thing that the 1980 flop had in common with our current presidential election.

Kelly’s Pogo dealt with sociopolitical issues of the 1940s-70s, from the Red Scare to the environmental movement and beyond. Kelly frequently broke the fourth wall, skewered untouchable political figures via harmless “funny animal” gags, and couched everything in quaint American Southern simpleton-speak that boiled Kelly’s philosophy down to its roots: people are basically stupid, but some are more benevolently stupid than others.

Pogo Possum is less foolish and more benevolent than most of his swamp brethren, so it’s only natural that he’d be their choice for president. Every election cycle, Kelly had Pogo’s friends press-gang him into running for the nation’s highest office, with little to no success (though some in real life would write him in on the ballot).

I Go Pogo is, ostensibly, an adaptation of this general set of storylines, though it veers into unrelated territory too often to be coherent (or even enjoyable for any non-fan). Still, Pogo bears a striking resemblance to other non-candidates, like Elizabeth Warren, who remain absent from the race despite constant howling from the progressive and moderate left. Like Pogo, Warren keeps fairly quiet and does her job (Pogo: fishing, quipping; Warren: lawmaking, Tweeting) with periodic pauses to lambast all those in earshot for the sheer nonsense that’s infested politics-as-usual. The only difference appears to be that Warren is already in politics and Pogo has a tail; one wonders if Pogo wouldn’t have accepted a running mate position if someone else had taken the top spot, as may be proven to be the case with Warren and Hillary Clinton.

On the other side of the spectrum, there’s very little doubt about who Donald Trump could be in this equation. P.T. Bridgeport, the fast-talking con artist/grizzly bear in a suit, make his debut as a consultant but quickly seizes control of the animals’ fundraising operations, increasing his own net worth by taking pennies he doesn’t need out of the hands of people who think (mistakenly) they’ll profit from his work. “I can tell a winner when I see one,” he cajoles. “You know me, I’ve been with you… and tonight, when I go to sleep, I’ll pull the sheet up, tuck it right under my neck, and I’ll look up at the sky and I’ll tell myself as I think of you: ‘Another day that I fooled those silly bozos.’” Bridgeport also sets up a kissing booth for one of the swamp’s only female residents and presents his former partners with an exorbitant, unrealistic bill for services rendered. What part of him isn’t Trump?

It’s not surprising that a work based on Kelly’s masterpiece, flawed though it may be, is still prescient. After all, Kelly’s themes are timeless, hitting upon the brutal truths about the lowest common denominators—and those who prey on them—in representative democracy. But the movie itself, which in 1980 defined the term “failure to launch” with its quiet implosion after one New York screening, resembles another 2016 candidate: Marco Rubio, whose conservative pedigree, youthful vigor, and Latino heritage made him a can’t lose candidate who somehow still managed to flop even in his home state. Somewhere, Walt Kelly is looking down and chuckling dryly as his characters live and die and live again in our ever-forgetful political cycle.