Some Random Notes on the Golden Girls' Slowly Increasing Decrepitude

Rose remains among the living, but Blanche, Dorothy and Sophia? They're so dead. 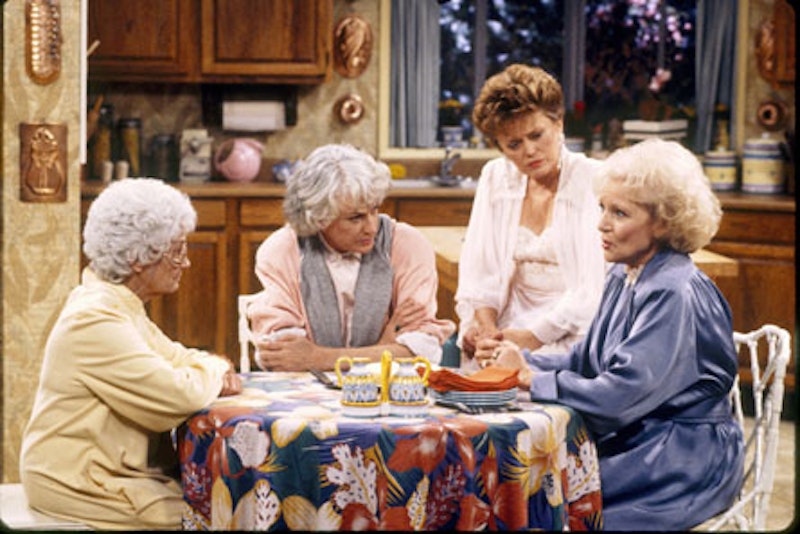 1. Herb Edelman, who so memorably portrayed oft-toupee’d loser Stan Zbornak on The Golden Girls, succumbed to emphysema July 21, 1996 - the same day that b-movie star Luana Anders lost a battle with breast cancer. Edelman, who appeared in 26 Golden Girls episodes, was 62.

3. The Golden Girls is a historical television show - not just for its elderly cast and tackling of themes of concern to those in that more mature demographic, but in the sense it aired on Saturday night at a time when people habitually watched television on Saturday nights. Every Saturday when I was a child, my mother and I would order from Domino’s and chuckle together over 227 and Amen and Empty Nest and Golden Girls and Sisters; it was one of our special mother-son traditions.

4. In retrospect, Dorothy (Bea Arthur) was kind of a robo-bitch, wasn’t she?

5. As Girls progressed, the décor of the show’s various sets brightened, as if the producers wanted the communal lives of oversexed retirees to appear more vibrant, satisfying, exciting. The first two seasons were full of shaky cameras and extreme close-ups that felt amateurish, uncomfortable. As cranky Sicilian octogenarian Sophia Petrillo, actress Estelle Getty was observed to actually grow younger between the first and second seasons as the makeup and costume departments eased up on the character’s appearance.

6. Marc Cherry, creator of Desperate Housewives, cut his network-TV teeth as a writer/producer on The Golden Girls.

7. An old friend had this thing about laugh tracks that she liked to trot out during our late-night chats.

“You know how they used to have laugh tracks on sitcoms?” she’d begin.

Whether or not this is true in a universal sense - and if it is true, it’s uncomfortable to think about the cackling of ghosts being synced to the newest episode of The Suite Life On Deck or whatever - I believe that it’s true, which colors my classic-sitcom viewing experiences in a predictably unsettling way.

8. Television achieves an discomfiting perch in the hierarchy of your life when you unconsciously come to consider television characters, or personalities, or talking heads, or the celebrities television sometimes extols, as friends or part of the so-called nuclear family, as familiar entities who share space and enhance or improve the quality of your life. It happens very surreptitiously, doesn’t it, when you’re not quite aware of it, when your early 30s are giving way to your mid 30s and you’re well past the point where you’ve forgotten how to make friends and acquaintances of your neighbors, co-workers, and fellow members of the community. We watch, and therefore, we belong.

9. If your job was to archive and manipulate and generally oversee the use of decade-old laugh tracks, wouldn’t that creep you out? Wouldn’t you feel like a crypt keeper or something?

10. What struck me the other night was the fact that I’d never been, before now, so thoroughly absorbed in the present tense by a television program so thoroughly rooted in the past, where most of the cast members are not living and breathing and shoveling down caviar somewhere. Seinfeld is dated and very much a product of the somewhat recent past, but its sheer temporal remoteness - the sense that one is witnessing an illusion of light and sound as opposed to people moving and talking on the other side of a television screen - is tempered somewhat by the fact that the principals remain on the mortal coil and continue to cash royalty checks.

11. You didn’t hallucinate Quentin Tarantino as one of a dozen or so Elvis impersonators on that one episode where Sophia marries Max. It happened. That was really him. Other guest stars of note: George Clooney, Mario Lopez, and Billy Jayne, who played Mikey on Parker Louis Can’t Lose.

12. We’ve been steadily acquiring each season, used, via Amazon. Presently, my son’s favorite two episodes are the ones (a) where Rose must attend a remedial history class to get her high school diploma and (b) the girls are arrested at a hotel on suspicion of prostitution. My son puts a lot of oomph into laughing at quips that are way beyond his level of comprehension. To him, what happens in and around that Miami ranch house is simultaneously real and a cartoon, one of several experiential wellsprings to draw upon in relating to us. Golden Girls has supplanted, for him, Spongebob Squarepants.

13. So Rose (Betty White) makes a clueless, asinine remark, which elicits canned studio audience laughter. Dorothy waits a beat, then asks Blanche (Rue McClanahan) for her newspaper, which Blanche provides, whereupon Dorothy whacks Rose on the head, which is kind of a Three Stooges gag and a nod to the fact that these three women of a certain age are old enough to remember when The Three Stooges was a new thing. And this scene is amusing no matter how many times you watch it unfold, even though you know what’s going to happen. But this scene could never be properly restaged, fresh, in real-time, in a facsimile of that already artificial, knick-knack clogged kitchen set, because most of the people who laughed at it, who whooped and hollered - if they did - are dead, and Arthur is history, and McClanahan is on her mantle. So doing this again would leave us with White - on leave from Hot In Cleveland - seated alone at that particular kitchen table, gazing mutely at nothing.