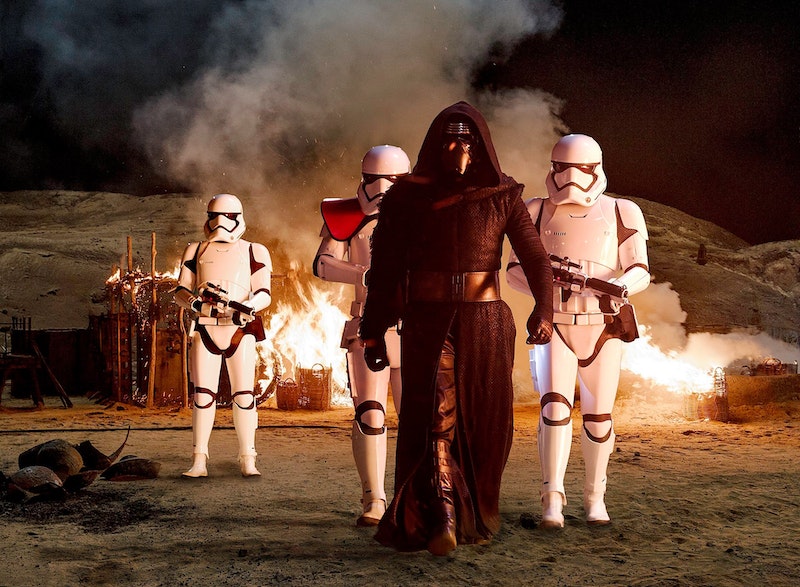 As a member of the Big Ol’ Dork Squad, I refused to see Star Wars Episode VII: The Force Awakens before re-watching every single Star Wars movie immediately beforehand. Before opening night, I traveled to my old college town of Binghamton to drink heavily and revisit some of the most iconic memories of my childhood before seeing a movie that would affect me more deeply than I thought possible.

My friends and I watched the series in “Machete order,” beginning with the first two movies (A New Hope and The Empire Strikes Back) before flashing back to the gleefully bad prequel movies Attack of the Clones and Revenge of the Sith. We collectively skipped The Phantom Menace because we’re not into self-harming, but though I love to hate Clones so much—my favorite line of almost any movie is Anakin’s shitty come-on to Padme, favorably comparing her skin to the sands of Tatooine—Revenge actually holds up pretty well; it’s a solid story of love gone wrong, teen angst manipulated by abusive elders, and the consequences of desire. Ewan McGregor in particular gives a master class in “working with what you’ve got,” and thematically, the film works beautifully when watched in tandem with Return of the Jedi. All told, marathoning the series in this way is a delightful primer to The Force Awakens, even though the new film doesn’t involve George Lucas in any way. Spoilers follow.

Both Revenge and Jedi have distinct themes of paternal inheritance, as J.J. Abrams has noted. Anakin fails in attempting to surpass a father he’s never known, and is more easily lured to the dark side due to the influence of a paternal figure who replaces that father; Luke takes up the mantle his father should’ve borne, directly fulfilling the prophecy that Anakin denied. Abrams echoes this theme indirectly by exploring the other wing of the Skywalker lineage: Leia Organa, Han Solo—and their son, Ben Solo, now a Sith apprentice calling himself Kylo Ren. Unlike Anakin and Luke, Kylo has always known his father, but after training with Luke as part of his attempted “Jedi Order” after the Empire’s fall in Jedi, Kylo succumbed to the influence of Supreme Leader Snoke and slaughtered his fellow Jedi apprentices. We join the action in TFA years after this tragedy, which has thrown Han and Leia’s marriage apart and destroyed any contact they might have had with their son.

In some ways, this is comparable to Abrams’ relationship with Lucas’ legacy. Kylo expresses deeply conflicted emotions in his final reunion with Han, a boy who wants to go home to Mom and Dad but knows he can’t. During the movie’s emotional climax, Kylo swiftly impales Han on his lightsaber, attempting to cast aside his true identity of Ben Solo once and for all. In reality, Kylo can’t kill Ben any more than Abrams can kill Lucas, or eject his influence from these new movies—but by cutting away enough of the original trilogy, viewers understand that this is fundamentally an entirely new Star Wars.

The blood in TFA is enough to prove this point on it own. Within the first five minutes of action, Finn—a stormtrooper of the First Order, played with boyish intensity by John Boyega—swipes three fingers of blood across his helmet, the first time we see any considerable amount of gore in any of the movies thus far. Even when Anakin is left a triple amputee in the lava of Mustafar during Revenge, his wounds are bloodless; the only exception to this rule is in Hope, when Obi-Wan slices off an alien’s arm in Mos Eisley and spatters some strange blood about the cantina. But that alien was scum and/or villainous; the blood on Finn’s helmet comes from an innocent villager. This is a whole new level of up-close violence for Star Wars.

I can’t write about this movie without pointing out the role feminism has played in its success as an immersive film experience. I only noticed after I left the theater that many background roles—mechanics, soldiers, military advisers, scavengers, and so on—had been played by women. And that’s because two of the movie’s largest roles are played by women: Daisy Ridley as the mysteriously abandoned proto-Jedi Rey, and of course, Carrie Fisher, returning to her iconic role as now-General Leia. This is a far cry from the Star Wars that relegated Fisher to 15 silent minutes in a metal bikini and slapped Natalie Portman in a belly shirt the instant she turned 18. Women are a legitimate part of the Star Wars universe now, and that in itself may be a bigger thematic departure from the films that came before than anything.

But as different as TFA is from the original trilogy or prequels, there’s still the same raw emotion and heroic grandeur that we always look for in our favorite space opera. I cried about five times over two hours, and no, that’s not completely because of the hormones. Abrams’ direction, Boyega and Ridley’s youthful enthusiasm for their roles, the delicious evil emanating from villains Kylo, Snoke, and Captain Phasma—played by Gwendoline Christie, who desperately needs more screen time—and the lovingly crafted special effects, which blend CGI smoothly with classic Lucasfilm stop-motion animation and puppetry; all these elements come together to create an experience that is Star Wars for the 21st century, in a way which the prequels aspired to be but fell short. This is “the sequel” at its apex: a bold look into the future, wearing the hip leather jacket of the past.