The Hateful Eight is more bleak than revolutionary. 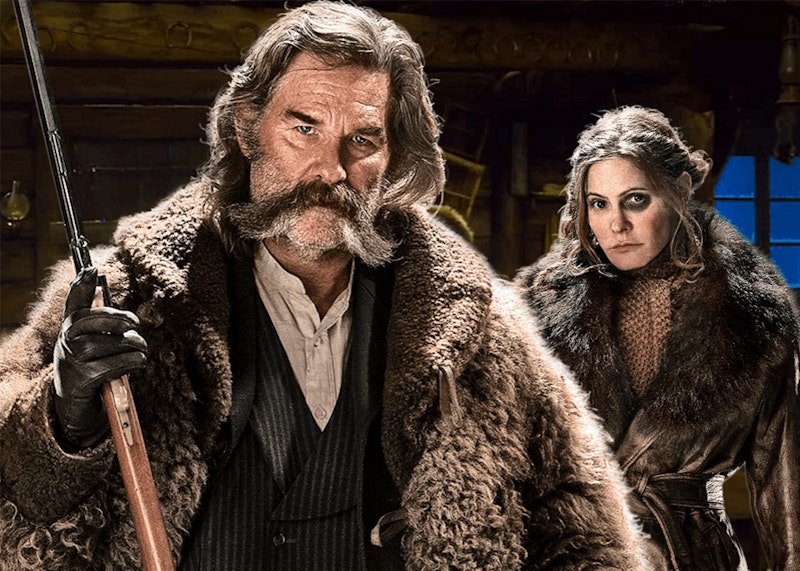 Why did Marsellus Wallace have Antwan Rockamora thrown from a four-story window? Exactly how lethal and durable is a Hattori Hanzo sword? When, how, and why did Lt. Aldo Raine acquire the curious scar that encircles his neck? As a director and screenwriter, Quentin Tarantino has long been a connoisseur of legends, myths, rumors; tales sluiced through grapevines until they’re taller than skyscrapers. This embrace of the fantastical borders on worship and echoes through his filmography, if you’re willing to listen for it. (This extends to a continuum of mere mortals as sources of wonder or magical talismans. Think of the Wolf in Pulp Fiction, Arlene in Death Proof, any number of characters in other movies who are spoken of and never seen.) Identity and reputation rule the roost, even as probable or potential illusions.

Above and beyond its black-hearted inhumanity, racism, and extremely justifiable paranoia, The Hateful Eight registers most sharply as an orgy of clashing guises. Once it’s accepted that almost everything said by nearly everyone in this three-hour movie is a bald-faced lie, the enjoyment comes in feeling out the grain and weave of each lie and discerning the shape and cut of the overall mystery. The setting is remote and lawless: Wyoming during a blizzard, post-Civil War. Sweeps of crisp snow, bare trees, and a huge, damning crucifix aside, the actors are the true scenery here, wearing oversized myths supplied by Tarantino like third layers of insulation against winter’s chill.

The actors swish around and savor every line in what is, in essence, an extremely expensive stageplay. Lost in the cast is Jennifer Jason Leigh, whose role demands myriad emotions. Keep an eye on her face: disgust, disdain, impudence, and impishness flicker across it, sometimes in a single scene. She’s a captive in a coonskin cap, a minor myth in the face of two larger-than-life bounty hunters whose legends precede them with a vehemence that seems to mock audience and milieu alike. Kurt Russell’s scruffed, salty John Ruth implacably trusts no one; Samuel L. Jackson’s stoic, cat-like Major Marquis Warren plays his suspicions closer to the vest. Walter Goggins, as a former Confederate soldier and supposed Sheriff-to-be of the burg all parties are streaming toward, is astonishingly solid as plot-goosing comic relief and all-purpose megaphone for Tarantino’s self-masturbatory myth fetishism; you’ll loathe him, begrudgingly love him, wouldn’t even loan him someone else’s half-lame horse.

If this review, like all Hateful Eight reviews, seems to stop short or lack for something, it’s because spoilers do apply—a mystery demands resolution, truths just out of reach, people are killed or injured in astonishing ways. Everything adds up to a result more bleak than revolutionary, but en route, almost every character feels truly defined if not fully revealed to us or to themselves. By the time the credits roll, these dime-store novel mythologies have twisted even further.