Carol Is a Triumphant Return for Todd Haynes

The tale of Therese. 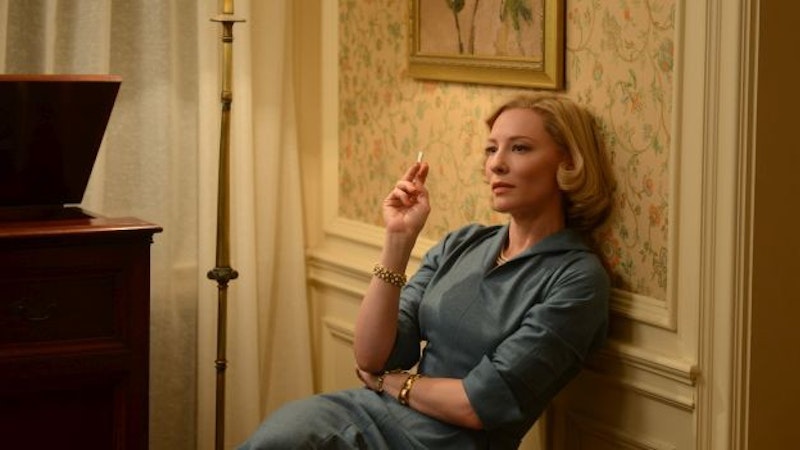 Carol is Todd Haynes' first film since 2007’s hallucinatory Bob Dylan über-fan homage I’m Not There. Haynes belongs to the generation of video store scholars that grew up gripping Super 8mm cameras like Quentin Tarantino, Steven Soderbergh, Richard Linklater, Paul Thomas Anderson, and Todd Solondz. After seeing Carol over the weekend, I looked up Haynes to see what he had done in the last eight years that I’d missed. Nothing. Well, not exactly—in 2011 he wrote and directed a miniseries adaptation of Mildred Pierce for HBO starring Kate Winslet, five episodes with a budget of $20 million. Yet Carol, in development for over a decade before Haynes signed on to direct, couldn’t even get $12 million in financing. Not that it matters ultimately, because Carol is absolutely gorgeous and visually immersive, like one sustained Vivian Maier photomontage. But it appears that Haynes is another victim of the collapse of mid-level moviemaking, another auteur snapped up by offers impossible to refuse from cable and streaming services.

Why so salty? Well, Carol was one of the best movies I saw in 2015, and it’s lonely at the top. The air is getting thinner, even as some good news trickles in for film lovers: Dope and Tangerine were both outstanding Sundance debuts, Tarantino got his 70mm roadshow release, and everyone is on their knees ready to blow Charlie Kaufman over Anomalisa. I’m not sure how to feel about all the fawning for Kaufman’s latest—it suggests something more palatable and less challenging than Synecdoche, New York, which was loved or loathed. Carol is drawing all the drool, too: forbidden 1950s lesbian romance (relevant! and with none of the baggage of cis-gendered Eddie Redmayne playing The Danish Girl), Christmas Day release, and major awards pushes and for-your-consideration campaigns for its star Cate Blanchett, the titular Carol Aird, and her shopgirl lover Therese Belivet, played by Rooney Mara. Though it checks all the boxes, Carol is far from empty Oscar bait.

Haynes has built a living dollhouse version of 1952. I was sure it was shot digitally with a lot of grain added, but Carol was made using Super 16mm, giving it a very distinctive and gauzy look, one with a sharp clarity but a Coke-bottle colored haze, a greenish hue that covers the incredible art direction and costume design. We see through Therese’s eyes, and fall for Carol along with her, very, very slowly. I’m a hard sell with a hard shell, but when they finally consummate their relationship, I felt the familiar blooming of a crush high and intense love, something completely separate from pure lust. Carter Burwell’s score is understated and brilliant in its simplicity, and every pluck from the harp felt like an arrow through my heart. The Price of Salt, the novel by Patricia Highsmith, was published under a pseudonym in the early-50s when homosexuals were treated like lepers and crooks, and in the film we see Carol and Therese’s quiet desperation turn into resolve as they demolish the delicate masculinity of their ex-husbands and eager lovers. Kyle Chandler is fantastic as Carol’s ex-husband Harge, who does everything he can to stop Carol from seeing their daughter Rindy once Therese enters the picture. Re-visiting the same Douglas Sirk soaked world of Far From Heaven, Haynes has created an unqualified queer masterpiece; it’s one of the most viscerally romantic movies I’ve seen in years.