The 70mm roadshow presentation of The Hateful Eight is disturbing and subversive. 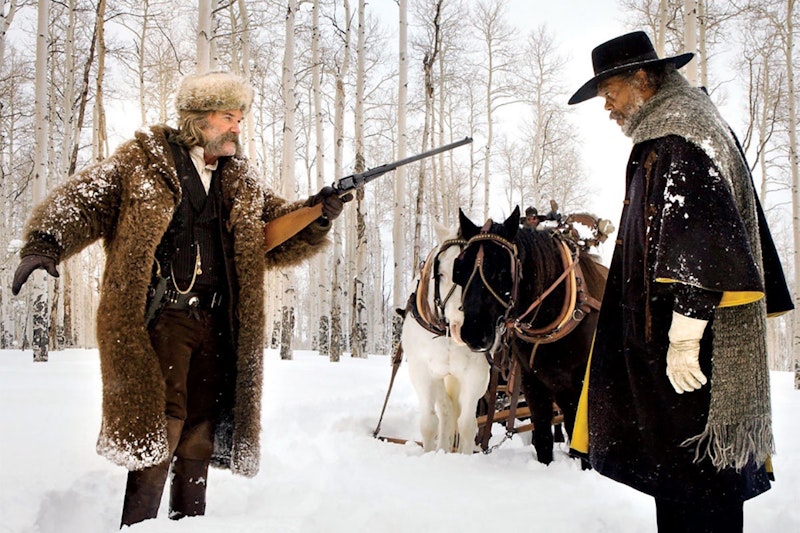 Quentin Tarantino is the only American director with enough power and passion to get his movies projected on film, and his latest remembrance of things past, the 70mm roadshow presentation of The Hateful Eight, is a thrilling and subversive experience. Film projection in theaters has quietly disappeared over the past five years, and although a handful of stalwarts and auteurs still shoot on film, their movies are almost never projected on film anymore. I was talking to a friend during the 15-minute intermission about how my eyes were bugging out at the beginning, and took a few minutes to adjust as the camera pulled out from a close-up of a statue of a crucified Christ to the vast white plains of a Wyoming blizzard. I told him how cool it was to see something new shown on film again for the first time in years, and that Tarantino was the only one who could pull it off. “Wes Anderson still shoots on film,” he said, misunderstanding me and missing the point that digital projection renders anything dead, no matter how it was shot.

The roadshow souvenir program includes a few words from Tarantino on the appeal of the bygone format: “The thing about the roadshows is that it made movies special. It wasn’t just a movie playing at your local theater. They would do these big musical productions before the normal release of the film. You would get a big colorful program. It was a presentation. They would play a Broadway show overture version of the soundtrack. If you’re going to shoot your movie and release it in 70mm, it’s really the way to go: twenty-four frames a second flickering through a projector, creating the illusion of movement.”

As always, I was tardy and misjudged the drive to suburban Baltimore’s White Marsh, a theater I hadn’t been to in years. The place is always a mess—snaking lines breaking off and converging, couples asking each other which one is concession and which is tickets. I was sweating bullets as we inched up to the ticket counter, three minutes past showtime—with the special projector, I figured there’d be no trailers, and I was right. We were handed our programs and rushed into the theater to the strains of Ennio Morricone’s opening theme. Much to my dismay, we’d missed the overture and half of the title cards. But we had great seats in dead center, and were sucked in immediately. The movie is a marvel, a fucked-up and gloriously evil masterpiece of violence and deceit and hellish suffering. It’s a total gab-fest, taking place exclusively in a stagecoach and then in a haberdashery during a severe blizzard. Tarantino has said that he wanted to take all the mysterious “celebrity guest star” characters that would pop up in Bonanza or Gunsmoke or the Green Ranger in Mighty Morphin Power Rangers—these are characters you know nothing about and generally can’t trust—and lock them in a cabin during a blizzard. There is no one to root for in this movie, there isn’t even anyone close to an anti-hero—every single one of them is a sick fuck from hell. Samuel L. Jackson comes close, but he obliterates all good will with his devastating speech at the end of the first act.

Three hours of tense movement and dialogue would be a bore from anyone without Tarantino’s golden ear. I was disappointed by his last two movies, Inglourious Basterds and Django Unchained, because of their tidy, theatrical, and pandering happy endings. Killing Hitler in a theater and torching a slaveowner’s mansion was empty wish fulfillment, and I haven’t seen either more than once. The Hateful Eight is the best thing Tarantino’s done since Kill Bill, and I can’t wait to see it again and soak in its deeply disturbing and claustrophobic world next week. The presentation in true 70mm as a throwback to a populist past isn’t just indulgence, like the Grindhouse double feature in 2007. The Hateful Eight never would’ve been presented in this format 40 years ago, and all the pomp and circumstance for such an incredibly dark movie makes the grand presentation all the more subversive. There are few sweeping vistas and no thrilling chases—the movie makes you feel like you’re inside the cabin with all the death and deceit of these people, and otherwise banal close-ups take on great significance when presented on such a grand scale. See this death in life before you miss your chance.