Binge watching culture is one step closer to the world of WALL-E. 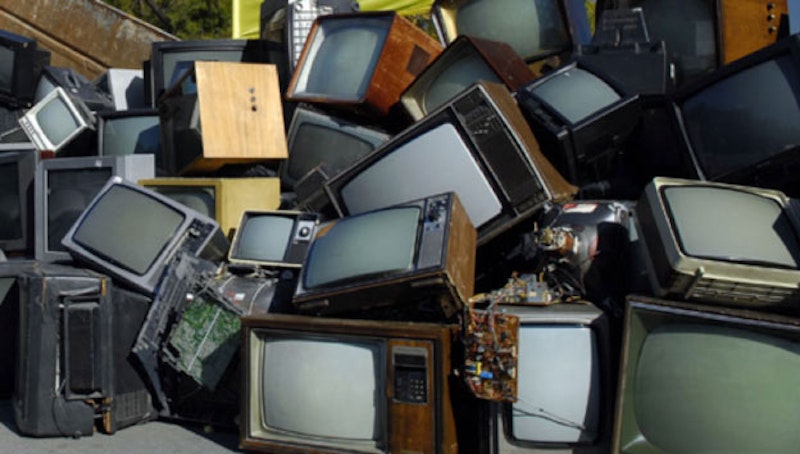 Everyone and their shows. I want to get cable again, but just for the news. I missed all the modern masterworks during their run—The Wire, Breaking Bad, Mad Men, The Sopranos. Unless I catch something one or two episodes deep, I can’t catch up. It’s too much time, and I get so distracted watching anything at home. In a movie theater, I don’t get up—I remember seeing Matchstick Men in 2003 and having to pee so badly by the end that I almost passed out. But at home? I’ll pick up a book, look at my phone, check Facebook, and give up on whatever I planned to watch no more than 20 minutes in. Leaving the house and going somewhere to watch something on a huge screen that will start at a certain time whether you’re there or not, with a bunch of silent strangers, will always be more engaging than something else pulled up on a laptop screen.

Binge watching is a drug-like experience, something compulsive that leaves you sleepless and empty inside. I’ve only done it a couple times—with the original Arrested Development and House of Lies. I hardly remember anything from either show, and the only lasting impression I have is that drained feeling of sickness that comes on the morning after Halloween. I have hundreds of memories of walking out of movie theaters feeling elated, pissed off, confused, and excited, infused with a kind of contagious creativity. Movies overwhelm you, and the two- or three-hour time limit keep things reasonable. Breaking Bad is hundreds of hours: television shows are full of filler, and the structure is totally ill-suited to consuming all at once, like with a House of Cards, or anything that’s already been collected and released for purchase or streaming. But people are going out less—Netflix and chill? Watching The Wire feels like a burden because it’s such a time commitment, but I’d never buy something like QuickMode, a new service that speeds up whatever you’re watching by 30 percent, and pitch corrects the audio, just so that you can get through the series faster, as if it were a chore. It reminds me of when medium-size cups disappeared from fast food restaurants at the turn of the decade, and straws got wider so you could get the sweet poison down your throat quicker. There are no free refills.

The floor has fallen out of the film industry and everyone trying to do something new and creative has either gone to TV or made due with a pittance of a budget. Mid-level movies are extinct—directors like John Waters, David Lynch, and Steven Soderbergh have given up trying to get money for movies that studios aren’t interested in anymore. Soderbergh is the only one who’s gone to television, with the critically acclaimed Cinemax series The Knick. Soderbergh said last year, “The meetings have gotten pretty weird. There are fewer and fewer executives who are in the business because they love movies. There are fewer and fewer executives that know movies… You’ve got people who don’t know movies and don’t watch movies for pleasure deciding what movie you’re going to be allowed to make.”

Charlie Kaufman had to get financing for his latest film Anomalisa—his first since the brilliant Synecdoche, New York in 2008—started through Kickstarter. It’s maddening how many of Kaufman’s scripts and pilots have gone in the trash because of wary and disinterested executives. “We made Adaptation at Sony—not Sony Classics, at Sony. Amy Pascal green-lit that movie. That’s not something that would ever happen at Sony now, ever. There’s no mid-level movies being made anymore anywhere, and so it’s really complicated for people who need $20 million to make a movie.” There’s something to be said about being left wanting more and knowing you’ll never get it. You’ll think about it for years afterwards. Fan service is a disservice—don’t give the audience what they want, because it won’t stick. There’s room to imagine or think about what could be. That there’s a service that allows you to consume a show at a faster clip, as if you’re eating from a trough like a barn animal, is deeply disturbing, one step closer to the world of WALL-E. If you have to speed something up just to get through it, you’re not enjoying it; you’re making yourself sick.