The Emotional Terrorism of Paris, Texas

Wim Wenders’ revered 1984 film is a blithe and blindly sentimental valorization of a deadbeat alcoholic kidnapper. 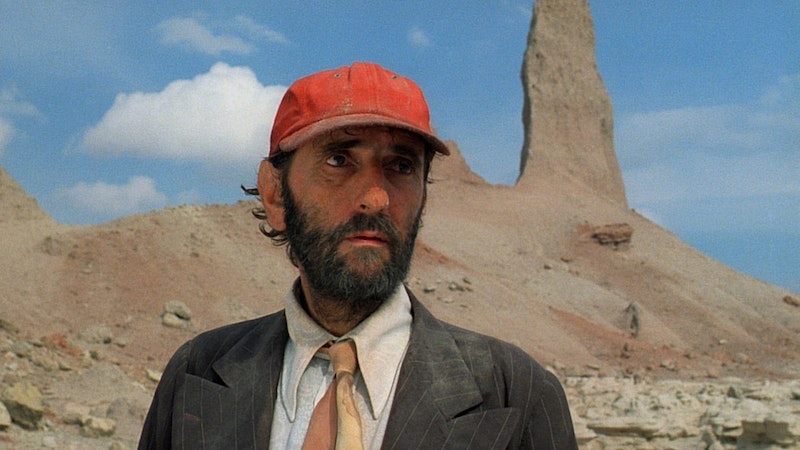 I’ve written about problem actors before, but lately I’ve been thinking about problem movies, where afterward you find yourself lost at sea while your friends wave hello from an opposite shore. Usually other dissenters are easy to find elsewhere—I had no problem finding people who hated Whiplash and The Tree of Life as much as me. But I’ve yet to find someone who despises or even dislikes Wim Wenders’ Paris, Texas. Actually, I haven’t found anyone that didn’t love Wenders’ film. In an iconic performance, Harry Dean Stanton plays Travis Henderson, a mute amnesiac who we meet wandering through the desert in a dirty suit and a pre-MAGA red hat.

This is not a right-wing film, like Kathryn Bigelow’s horrifying Zero Dark Thirty, the most sickening piece of political propaganda posing as entertainment I’ve ever seen in a theater. Consensus has been reached on Bigelow’s film, and her collaboration with the CIA during the production ensures its status as a severely compromised work at best, and at worst, a window into an authoritarian cinema. It’s ethically dubious, and the filmmakers’ sympathies clearly lie with the wrong people: it judges extrajudicial torture and murder as necessary evils, or simply a means to an end our government assumes we all wanted. It took too long to kill Osama bin Laden, and by the time it happened in 2011, the bile was gone and the coordinates had shifted. We were the villains of the world, responsible for two unnecessary wars that killed millions, all in response to a terrorist attack that killed far fewer.

It’s an extreme comparison, but to me Paris, Texas is as ethically compromised and insane as Bigelow’s film, but in emotional terms rather than political. Wenders expects us to sympathize with a dysfunctional and mute cipher of a man who, after being found by his brother (Dean Stockwell), is brought back to Los Angeles to see the son he abandoned four years prior. The kid barely remembers him, raised by Stockwell and his wife (played by Aurore Clément) in Stanton’s absence. They are good people: responsible, reliable, and genuinely loving toward their nephew. They have raised him well. The first reunion between father and son is predictably cold, and at first it seems that the kid isn’t going to accept the return of a man who left him as a toddler. But they gradually get on, even as Stanton’s idiosyncrasies—to put it mildly—annoy his brother and to a lesser extent his sister-in-law. This is the first half of the movie, and I have no issue with it. Only when Stanton kidnaps his son and goes on a quest to find his ex-wife and the kid’s birth mother do I start to lose it.

Keep in mind that Stanton’s brother and sister-in-law have no idea where their nephew is or what condition Stanton’s mind and body are in. He’s remained mostly mute to this point, and at this point in the film, it’s obvious he vanished after a culmination of years of bad behavior. The most crucial point here, the one I always stress, is that once they leave LA, we never see Stockwell or Clément again. While Stanton and his son get fast food and play with walkie-talkies in his truck, we can only imagine what the adults who actually raised the kid are thinking and how they must be worried sick. Wenders never returns to them, and instead plays up father and son's “adventure” as a heart-warming bonding experience, something to enjoy and endear us to Stanton. It’s not funny.

Beyond the ethical issues, Paris, Texas is structurally lopsided and gives the audience a massive expository dump in its climactic scene when the pathetic Stanton can’t even face his ex-wife (Natassja Kinski) through a one-way mirror. He apologizes for what he did, and he mumbles his way through his penance and his crimes, talking of fire and drink and uncertainty and panic and fear. This is when the waterworks start every time with every person I’ve talked to. I’ve seen the movie three times: once over a decade ago, when all I retained was Robby Müller’s stunning cinematography and Ry Cooder’s beautiful, spare acoustic guitar score.

I watched it again at home about a year ago and couldn’t shake how fucked up it all felt, so I saw it a third time with friends when it played at The Senator a couple months ago just to make sure. I figured seeing it in a massive theater would change my mind about the movie—I saw Wenders’ Wings of Desire there for the first time just six months ago and was really moved, and that’s a movie I’m not sure I would’ve been on board with if I saw it alone at home. What could’ve been treacly and corny was nice, if not exactly overwhelming.

Not so with Paris, Texas. I couldn’t believe how many people agreed that Stanton’s Christ-like sojourn through the desert was proper punishment, or that he did the right thing by kidnapping his son (just a few days ago another friend argued that a father cannot kidnap his own son—look at any Amber Alert, the law does not agree), or that Wenders wasn’t compromising himself and showing his shallow, Hallmark card holding hand by never returning to that couple in LA that took care of a child that wasn’t theirs when his mom and dad were incapable of it themselves. This is the emotional terrorism of the film and why I’m so disgusted by it: what’s criminal and irresponsible is shown as heart-warming and fun. Is this wish fulfillment for people with shitty parents? I'm still not sure.

The kid may be having a good time, and Stanton never mistreats him. But how do Stockwell and Clément know that? How do they know that Stanton won’t go off the deep end again? And all they know about the mother is that she has a bank account set up for her son where she deposits money once a month. All well and good, but is she in any condition to raise her son? They have no way of knowing, and ultimately, neither do we.

On disagreeing with a character’s ethics, another friend brought up action films and one of my all time favorites, Nicolas Roeg’s Bad Timing. If Stanton is reprehensible, how can I enjoy a James Bond or Arnold Schwarzenegger movie? What about the unflinching portrayal of a toxic relationship in Roeg’s film? Well, the former are apolitical entertainment, where sympathies and ethics swim deep below purely visceral light and sound shows. Michael Bay, Don Siegel, and Damien Chazelle may be cryptofascists, but they know what they are, and so do their movies. Paris, Texas thinks it is more compassionate and wholesome than it is, and betrays a blithe, naïve, and conservative view of the world and what's right. This man would be thrown in jail today, and rightfully so. As for Bad Timing, Roeg condemns Art Garfunkel’s necrophilic rapist in a crucial final scene—as if he needed to put punctuation on a film that clearly depicted what an asshole Garfunkel was and showed how horribly he treated Theresa Russell. Paris, Texas valorizes a man who could be guilty of equally extreme crimes.

Wenders’ bourgeois sentimentalism leaves me steaming and others misty, and I write this as a sort of bat signal to see if I can find anyone else that has problems with Paris, Texas beyond its length. This isn’t a consciously contrarian pose, really it’s just alienating to be alone in feeling so strongly about a movie I find emotionally manipulative and suspect at best, and a despicable white-washing of a deadbeat alcoholic psychopath at worst.