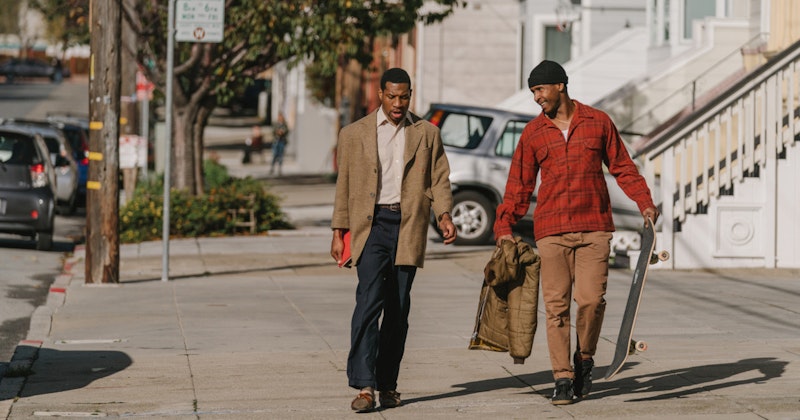 Films directed by new and rising filmmakers that’ve been shot and set in the San Francisco Bay area have had an impressive run recently. There was Ryan Coogler's Fruitvale Station in 2013, and Boots Riley's Sorry To Bother You, and Carlos López Estrada's Blindspotting, both in 2018. Now added to that list is the The Last Black Man in San Francisco, the astonishing debut of director Joe Talbot.

While those first three movies were mostly centered on Oakland, Last Black Man is an assured, visually stunning look at San Francisco, against the backdrop of a sad history that informs just about every frame. Last Black Man, written by Joe Talbot and Rob Richert, is from a story by Talbot and Jimmie Fails, who based it on loosely on actual events.

Fails, in his first major role, stars as a young man of the same name. Struggling and semi-employed, he dreams of moving into a certain Victorian house in the city's Fillmore District, that was built in the 1940s by his grandfather, but fell out of the family's hands due to unclear but undoubtedly tragic circumstances. Along with his best friend (Jonathan Majors), Jimmie decides to perform unauthorized repairs on the house, and when the couple living there is evicted, they decide to squat there.

The film shows a side of San Francisco that movies typically leave out, the struggling and the marginal, who live near the bay but not in huge houses, but on the streets. When visiting San Francisco you notice there are homeless people absolutely everywhere—but they rarely seem to show up in movies about the city, at least not in the last decade or so.

Do The Right Thing is a clear influence on Talbot here, but the visual palate is different and more unique. The film almost completely avoids the sort of clichés typical of movies set in San Francisco, even the good ones. There are no shots at douchey tech bros, and no fish-in-the-barrel digs at hippies. And while the plot is centered on real estate, there are no titanic battles between the white gentrifiers of today and the white gentrifiers of seven years ago. This film has another story on its mind, something much more fascinating.

A late scene turns the subtext into text, about not being able to hate a city until you've loved it first. This isn’t an emotion unique to San Francisco—probably two thirds of the people I know in Philadelphia feel that way about that city—but it's one that's absolutely earned.

Fails, whose only previous credit was a short film also directed by Talbot, has an outstanding presence in the lead role, as does Majors, who's had a handful of movie and TV roles. Character actor Rob Morgan is chilling in a brief turn as Jimmie's scammer father, while Danny Glover is affecting as Majors' blind grandfather. Glover was also in Sorry to Bother You, as well as Jim Jarmusch's recent The Dead Don't Die, and I’ve enjoyed his big screen renaissance.

With The Last Black Man in San Francisco, Talbot and Fails announce themselves as major new voices in American filmmaking.