Danny Boyle's Beatles fantasy is a broad pop success that understands the essential utopian tragedy of The Beatles. B+ 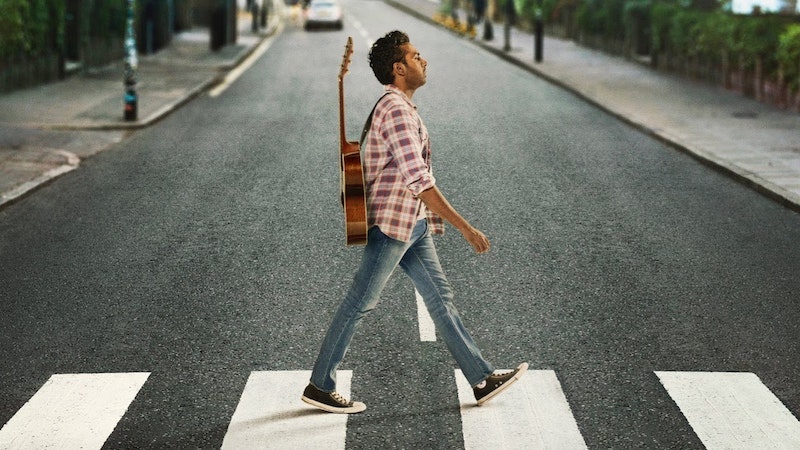 I didn’t expect much from Danny Boyle’s Yesterday. What’s the best that could happen? Too many things could’ve gone wrong: look at Bohemian Rhapsody, a movie made by committee and incompetent and bland beyond belief; or, even worse, Rocketman, an inexplicable fumble about one of the biggest hams in rock history—how could you make an Elton John biopic and not include “Funeral for a Friend/Love Lies Bleeding”? Like I wrote, that should’ve opened the movie! It has an overture built in!

I understand trepidation toward any Beatles movie after Bohemian Rhapsody proved that broad, big budget, sanitized biopics or films about mega musicians can be just as successful, if not more so, than Marvel’s stable of superheroes. That means that we're going to see a lot more watered down, whitewashed, and smoothed out rock movies. No more I'm Not There, no more Miles Ahead (flawed as it was by racist studio financiers), even straightforward prestige pictures like Walk the Line and Ray will disappear as the summer fantasy, or worse, singalongs increase. A Beatlers biopic would surely be a disaster, too much to cover, unless handled with the sophistication and finesse of someone like Todd Haynes, whose 2007 Bob Dylan biopic I’m Not There remains the single best rock star movie ever made: a film as radically experimental and idiosyncratic as its subject that still conveys an essential truth about the artist, perhaps best illustrated in its stunning final shot, Dylan in extreme close-up blowing the harmonica in 1966 on an elongated, junkie version to “Mr. Tambourine Man,” a culmination as transcendent as the song itself. Form and function in perfect harmony; an infinite spiral as immaculate as DNA.

Boyle’s film understands the inherent tragedy of The Beatles: music that manifests a utopia as visible as it is inaccessible. “All You Need is Love”—if only… but Yesterday believes in this myth, and through simple craftsmanship and competent filmmaking, one leaves the theater swept away. The religious purity and ideal of The Beatles is preserved here, and one needs only to listen to “I Want to Hold Your Hand,” “She Loves You,” “In My Life,” “Here Comes the Sun,” or “Ob-La-Di, Ob-La-Da” to glimpse that heaven revealed to us by John, Paul, George, and Ringo half a century ago. I mention those songs because they’re all included here, and though large swaths of the catalogue are missing (and zero solo material), there are enough appearances and references to satisfy anyone left hanging by the baffling absence of Elton John songs in Rocketman.

Jack (Himesh Patel) is hit by a truck one night and wakes up in a world where The Beatles never existed (neither do Coca-Cola or Oasis, among others—the best moment of the screening I saw  was when some guy went "oh, SHIT!" when it was revealed that cigarettes no longer existed, either). Jack plays "Yesterday" on acoustic guitar and sings to his enraptured friends, enormously impressed but not exactly over the moon. "It's not Coldplay. It's not 'Fix You.'" Yesterday is funny enough and gets by with gags like this, the best of which might be Ed Sheeran's ringtone being his own "Shape of You." Boyle's film is clearly made for a world audience with no drug references or acrimony or shades of The Beatles beyond the most important thing about them: the universal appeal of their compositions, which remain breathtakingly beautiful even in jejune or barebones arrangements.

There are dissenters, like Nathan Smith: “Yesterday Remembers the Beatles But Forgets What Made Them Great.” For Pitchfork, he writes that, “The movie never really offers a sufficient reason as to why Jack’s take on the Beatles becomes successful, other than the fact that these songs were written by the Beatles, and the Beatles were geniuses, so of course their songs would tear up the charts no matter who records them, how they are performed, or when they are released.”

Smith finds Patel’s serviceable, middle-of-the-road boardwalk busker delivery of the songs as a fatal flaw, betraying Boyle’s superficial assessment of The Beatles as preferring “content over craftsmanship.” I’d argue this is what makes the film so successful: True, Patel’s character performs the many masterpieces of The Beatles with just a guitar or piano, and occasionally with a serviceable if anonymous band. It doesn’t matter: “I Want to Hold Your Hand” remains so overwhelming it moves one to tears. The straightforward delivery of these songs reinforces how brilliant they are, and if anything, proves that The Beatles would’ve been massive even if they’d been stuck with a couple of acoustics and a baby grand.

Remember that this is a broad pop picture. It’s not I’m Not There, nor even Miles Ahead—there will be no mention of LSD, lost weekends, or Yoko Ono. Still, Smith complains that, “There’s virtually no mention of what the Beatles actually contributed to music—no nods to their experimentation with different genres and innovative recording methods.” Where would backwards guitar solos and tape collages fit into this story? That’s an approach for a different movie, one that I’d happily see—but this is coming hot on the heels of two blockbuster biopic semi-musicals, and I suspect it’s the best we’re going to get (unbeknownst to me, there’s a Bruce Springsteen movie coming out later this year called Blinded by the Light—I was blindsided by the trailer that played before Yesterday). The only bum note is Kate McKinnon as Jack's rapacious manager. She's stuck doing schtick that got stale on SNL before the 2016 election. I think she's a good actress, and she's typecast here and eager to play along (it was probably worth it).

Smith also gets on Boyle’s case for making a “drab” film “made for Boomers,” and again I think this misses the point, because the music of The Beatles is for everyone. It’s as much a universal language as the cinema itself, and their greatness will likely never be surpassed. The Beatles demonstrated a utopia in the same way that nuclear fission demonstrated an equally powerful vision of hell.

One more thing: I was very concerned that Paul would muck up this movie and shave John’s cynicism and songs from it. Judging by the trailers, and the title, there was an overabundance of Paul songs, and some of his most treacly. And they’re included here: “The Long and Winding Road,” “Let It Be,” “Hey Jude,” and of course “Yesterday.” I thought they’d give John short shrift, and though the song selection leans on Paul, the late Lennon is given a scene that sits at the heart of the movie: in this alternate universe where Patel and two others remember The Beatles, John Lennon has lived. He never became famous, but he’s happy and healthy at 78. Patel visits him in the English countryside, by the water, in the most moving scene of the film and the reason that every fan of The Beatles ought to see Yesterday. Lennon’s memory and the tragedy of his murder that matches the utopian heights of his music are addressed here with such grace and simplicity, with a universal message: happiness is what you make of what you’ve got.

I expected to come out of Yesterday complaining about the omnipresence of Paul's worst songs and a misunderstanding of everything The Beatles were. I'm happy to see others, like Rodrigo Perez for The Playlist, write that Yesterday "ignores John Lennon." Musically, he's right. But that scene with eldelry John at his beach house came out of nowhere and hit me hard. It does more than any extra song inclusion could've. The movie is not a masterpiece, but as far as fantasy goes, Yesterday is as good as it gets. It is Danny Boyle’s best film in years, and by far the best Beatles movie made since their breakup nearly 50 years ago.