Who Believes in Happily Ever After? 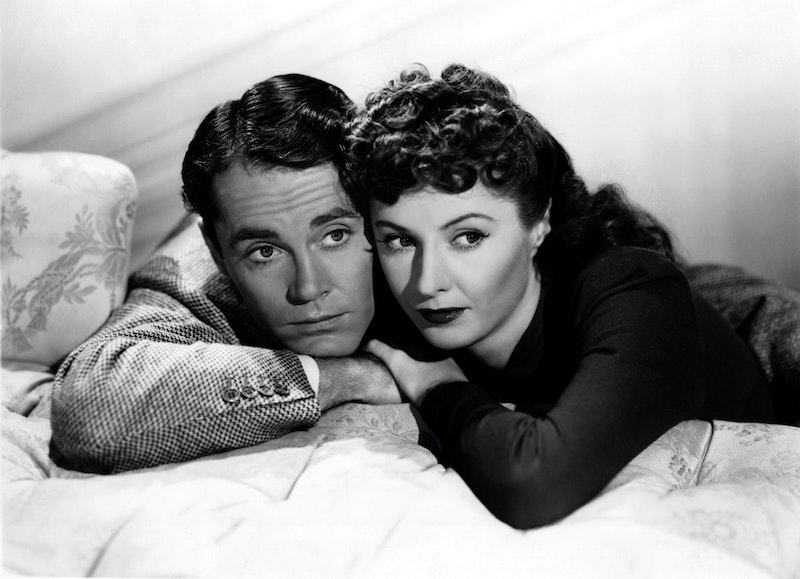 This is the second in a series on screwball comedies. The first, on Bringing Up Baby, is here.

A successful romantic comedy should have a happy ending. That doesn't just mean that the characters get together at the conclusion—the characters always get together at the end of a romance. But the trickier bit is whether you actually believe that the leads would be happy with each other.  Richard Gere's Edward in Pretty Woman is supposed to be desirable because he's wealthy and handsome. But he's also self-centered, self-impressed, a prick, and the film's earnest efforts to convince you that he's been saved by love never manages to sell it. Why would the smart, beautiful, witty Vivian (Julia Roberts) settle for this jerk? 50 Shades of Grey has similar problems; the vacuous Ana and insufferable Christian are repulsive. They’ll surely make each other miserable—satisfying in its way, but isn't it the happily-ever-after you hope for when you pick up a romance?

The Lady Eve is often cited as one of the great romance films of all time—and it's not difficult to see why. The script by Preston Sturges is cheerfully loopy while radiating a sophisticated sensuality. The scene in which Henry Fonda slides Barbara Stanwyck's shoe onto her stockinged foot is sexier than many an HBO full-frontal. Stanwyck, as shipboard card-shark Jean Harrington, is a wonder, brilliantly cynical and vulnerably romantic by turns, wearing her wiles so openly it ends up as simple-hearted honestly. "Of course [I'm an adventuress]," she says. "All women are. They have to be. If you waited for a man to propose to you from natural causes, you'd die of old maidenhood. That's why I let you try my slippers on." Her smile when Charles (Fonda) staggers away admitting he'll be unable to sleep because of her is such a marvel of delighted satisfaction that it's a seduction in itself. No wonder the befuddled Charles falls in love with her not once, but twice—the second time under the delusion that Jean is not Jean, but her estranged noble sister, the Lady Eve.

But while it's easy to understand why Charles falls for Jean, her attraction to him is harder to figure. Jean initially decides to seduce the wealthy Charles, heir to an ale fortune, so that her card-shark father, Colonel Harrington (Charles Coburn), can take him at poker for everything he's got. In theory, Jean is supposed to be won over despite herself by Charles's sweet naiveté and innocent protestations of affection—and also, presumably, by the fact that Charles looks like Henry Fonda.

The problem is that nice-guy Charles isn't really all that nice. He's just returned from a jaunt in the Amazon researching snakes, and like many a science-nerd, his geeky inexperience with women exists side by side with an ugly, entitled misogyny. Early on he self-importantly shows Jean and her dad how to palm cards, oblivious to the fact that they’re both much more talented in that department than he is. "He does card tricks!" Jean exclaims with just enough sincerity that Charles can't hear the contempt. When he does discover that Jean is a swindler, he reacts with bitter wounded pride. She apologizes tearfully for deceiving him, but he refuses to listen. She's smarter and less pure than he thought—and he can't stand it.

Jean, for her part, sees through Charles like glass. Her revenge is perfect in its audacity and incisiveness. She pretends to be a noblewoman from England, and comes to Charles' family home, where he dutifully falls for her again, proposing using the same goopy speech he used the first time (though this time he is delightfully interrupted by a nuzzling horse). Then, when the two of them are on the train setting off for their honeymoon, "Eve" confesses to having eloped with a stable hand when she was much younger—as well as to a series of other sexual adventures. Charles tries to be big about it at first, sententiously forgiving her. But, again, his pride takes over. Like Jean before her, Eve is not the pure wilting flower he thought. And so he gets off the train (falling in the mud because Sturges can't pass up any opportunity for a prat fall), without even consummating his marriage.

At the end of the film, Jean arranges to bump into Charles on a boat (by tripping him, which is how she arranged to meet him the first time). The chastened Charles, humbled by his disastrous relationship with Eve, throws himself into her arms. The film ends with Charles and Jean rushing into his cabin, before Jean has had a chance to explain to him that the two of them are, in fact, already married.

The conclusion feels rushed. Charles never has a conversation with Jean where he admits that it’s caddish of him to dump a woman because she's had other lovers.  More, at the end of the film he still hasn't figured out that Eve and Jean are the same person. Jean mutters throatily about how he's a poor fool. She seems to find it stimulating, but how long can that last? Her husband is a prudish dolt, who she manipulates with farcical ease. You can see Jean and Charles 10 years down the road, with Jean condescending to Charles a la Mr. Bennett in Pride and Prejudice and bemoaning the fate of a woman married to a silly husband. Charles is wealthy and handsome, and presumably that will be enough for some brief period. But eventually Jean is going to realize that the bounder and prig she married is always going to be a bounder and a prig.

The difference between The Lady Eve and Bringing Up Baby is instructive. Cary Grant's David is, like Charles, a bit of a doormat, easily manipulated by the more focused Susan (Katherine Hepburn). But David has flashes of gumption, as when he leaps into the air declaring he's come over gay all of a sudden, or when he gamely (if confusedly) joins in with Susan's hair-brained plans to release a leopard from its keepers. Bringing Up Baby is a less naturalistic film; Susan in her manic zaniness and David in his hyperbolic haplessness are both more caricatures than characters. The ending clinch isn't so much between David and Susan as it is between those virtuoso performers Cary Grant and Katherine Hepburn—and of course Grant and Hepburn deserve each other. Who could think otherwise?

The Lady Eve, though, aims for, and gets bogged down in, realism. At the beginning of the film Colonel Harrington asks Jean whether she doesn't think that falling in love with Charles is "a little bit dangerous? I don't mean for us, I mean for your heart. They're apt to be slightly narrow-minded, the righteous people." He's right; Charles is narrow-minded, inflexible, and boring. He hurts Jean's heart in the film, and it seems likely that he'll continue to hurt her thoughtlessly over the course of their marriage—and that, in revenge, she's likely to hurt him deliberately and with malice aforethought.