Taxi Driver and the Culture of Violence

The 1976 film still holds up, especially in light of yet another mass shooting. 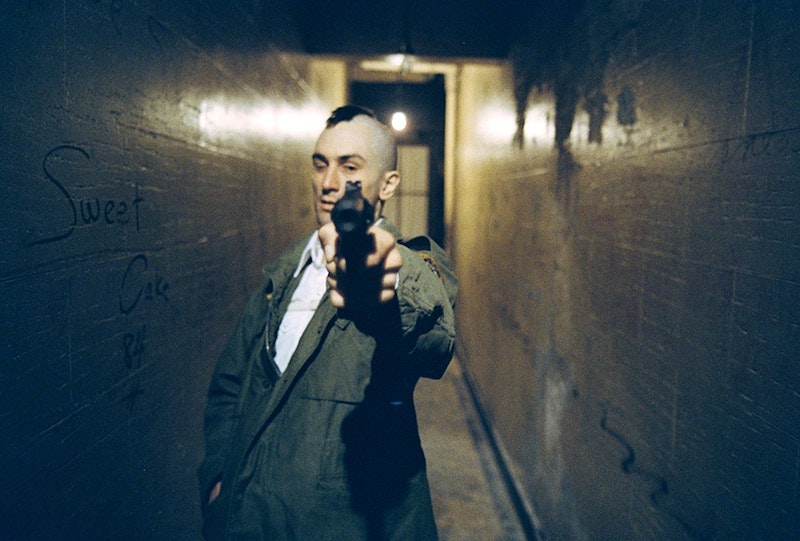 One of my favorite movies is Martin Scorsese’s Taxi Driver. Released in 1976, the portrayal of madness, loneliness, urban decay, and violence still holds up. This is especially true in light of the recent mass shooting in Las Vegas. While everyone on social media is talking about gun control laws—which is important—the one key factor that everyone’s overlooking is how this recent shooting is part of a larger culture of violence in America; a culture that Taxi Driver portrays brilliantly.

Bickle soon becomes obsessed with a 12-year-old prostitute named Iris (Jodie Foster). He tries to convince her to go back home to her parents, but she refuses. This only adds to Bickle’s obsession with “washing away” the filth in the city. He buys a round of guns via the black market, kills a man trying to hold up a corner store, and then decides to go bigger. First he tries to assassinate Palentine, but a Secret Service man chases him away before Bickle can pull out his gun. Then, in a graphically violent shootout, he kills Iris’ pimp Sport (Harvey Keitel), a brothel owner, and Iris’ john. The scene ends in an overhead shoot where the camera picks up all the carnage: Iris crying hysterically in a corner, Bickle covered in blood on a couch, the brothel owner’s brains splattered on the wall, the john lying in a pool of blood, and Sport’s corpse.

Ironically, Bickle suddenly becomes a hero. He saved a child from prostitution, and both Iris’ parents and the media praise him. Once Bickle recovers and is back driving a taxi, Betsy gets into his cab with a new respect for him. After he drops her off at her place, he drives off, but not without one last chilling look in the rearview mirror. This, according, to screenwriter Paul Schrader’s DVD commentary, means Bickle will do it again, but this time he won’t be a hero.

Many fans interpret the film’s end as Bickle’s dying wish of being seen as a hero, but Schrader and Scorsese say that’s not the case. Bickle is alive and ready to kill again. Thus, the media’s response to Bickle’s rampage reflects our culture’s double-nature when it comes to violence. Sure, Betsy may think Bickle is a hero, but she doesn’t know he tried to kill her boss. In fact, had he succeeded in assassinating Palantine it would be an entirely different story. But since he only killed a few bad guys, he’s a hero.

Americans love to say #AllLivesMatter and “violence begets violence.” Fix the gun control and mental health problems, and everything will change. Unfortunately, no one tries to get to the root of the problem, our culture of violence. We idolize the vigilante who takes the law into his own hands, the macho cowboy who shoots all the savage Indians, and the sniper soldier who can put a bullet through a terrorist’s head from a mile away. We’re so saturated with images of violence and carnage draped in heroism it’s only a matter of time someone thinks that’s the way to live. Then we wonder how something like the Las Vegas shooting can happen.

It’s not enough to simply preach nonviolent resistance; we need to face the violence directly and challenge it. We need to get the root of the problem in order to fix things. That’s why Taxi Driver stands the test of time. It holds a mirror to our society and says, “You’re the sick one.”