The Dead Shall Rise and Admire Their Production Values

In The Lazarus Effect, Blumhouse does Hollywood. Unfortunately. 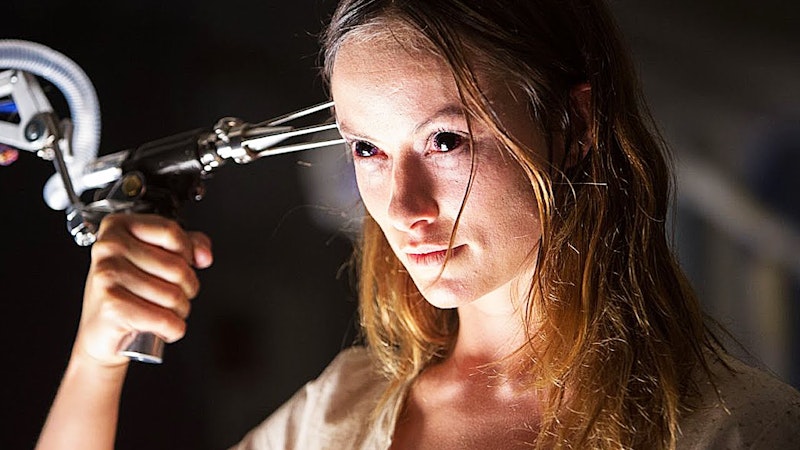 This is part of a series on Blumhouse horror films. The last entry on Paranormal Activity is here.

The Lazarus Effect (2015) stars Olivia Wilde, making it the first Blumhouse film I've seen in this series with a Hollywood name in the lead. And Wilde is complimented by a relatively high-budget endeavor; the movie doesn't use scruffy shaky-video found footage, and is mostly well-lit and professionally slick, with a real effects budget that includes dream sequences, trained animals, and levitating furniture.

Unfortunately, director David Gelb has followed the example of Hollywood features in other respects as well. Lower-budget Blumhouse films are often animated by real passion, or at least by real spite; without the usual golden path, they're forced to scrabble and scuttle along after their own feral instincts. The Lazarus Effect, in contrast, walks around with a good-looking body, but doesn't have much soul.

The film's plot is a familiar Frankenstein riff. Scientists Frank (Mark Duplass) and his fiancée Zoe have developed a formula that’s meant to restore coma patients, but turns out to actually bring the dead back to life. They reanimate a dog, which, in the usual foreshadowing way, displays some frightening aggression and an un-doglike ability to get snacks from out of high up cupboards. Due to their violations of ethics guidelines, the team's research is taken away by their pharma company sponsors. They try to secretly duplicate the experiments, but Zoe is electrocuted. Frank brings her back to life with the formula, and at first all seems well. But then she starts exhibiting psychic abilities like telepathy and telekinesis; her eyes go black and demonic, and soon she's murdering her colleagues and friends.

There's nothing wrong with the narrative as such; watching some monster murder a bunch of people is pretty much what you turn on a horror movie to see. The problem is that in this case neither the monster nor the victims are remotely interesting.

Good Blumhouse horror films—like Unfriended or Paranormal Activity—provide you with hateful characters whose deaths you can cheer with relish. But the scientists in The Lazarus Effect aren't particularly awful. Kevin’s overly focused on work, but he's hardly an insecure sexist dipshit like Mitch in Paranormal Activity. Another character smokes too much; a third has a crush on Zoe, a fourth is a videographer who is quite attractive. They aren't engaging, but not irritating either.

The demon is underwhelming too. The best good-to-evil horror transformations have some sort of metaphorical resonance. In Jennifer's Body the popular girl turns into a demon because popular girls are kind of demons already. But Zoe’s just a fairly happy, successful professional who gets along with her colleagues and boyfriend. There's no reason for her to kill them except that the script needs someone to start killing.

The writers are aware they haven't provided enough motivation, and try to add some meaningfulness by giving Zoe a tragic backstory of sorts. She saw neighbors get burned to death in a fire when she was little, and has had nightmares ever since. She's also a Catholic and believes in an afterlife. But it all seems tacked-on and pointless.

This is most evident in her first kill; she murders Nico (an underutilized Donald Glover), a longtime friend who has an unrequited crush on her. Back from the dead, Zoe presses him to have sex with her, he declines, and she kills him—which makes no sense. He was the one who carried a torch for her, so she kills him for not carrying a torch for her? Shouldn't she be slaughtering him for trying to get between her and her boyfriend, if she's going to slaughter him for something? It feels like the filmmakers aren't even minimally paying attention to their own movie. They just know they have the money to show a locker being mystically crushed.

Her murder of Zoe's husband also fails to advance characterization. She reads his mind, which would’ve been a fine moment to reveal some murder-worthy secret—he never loved her, he's having an affair with that pretty camerawoman, whatever. But instead, she learns that murderous Zoe freaks him out and he wants to stop her from killing anyone else, which hardly seems like a capital offense.

Even the apocalyptic twist ending feels irrelevant. Zoe’s going to raise an army of superbrain undead monsters—but why? She doesn't seem motivated by revenge, visions of superiority, sex, or even bloodlust. The ugly Frankenstein monster wanted to create a bride for companionship, but the beautiful Zoe? She has everything she needs; high production values, good skin. Maybe that's the problem. A monster who isn't hungry enough isn't much of a monster.