Peeks and Peaks at the New York Film Festival

Festival notices for If Beale Street Could Talk, 3 Faces, and Fire Music. 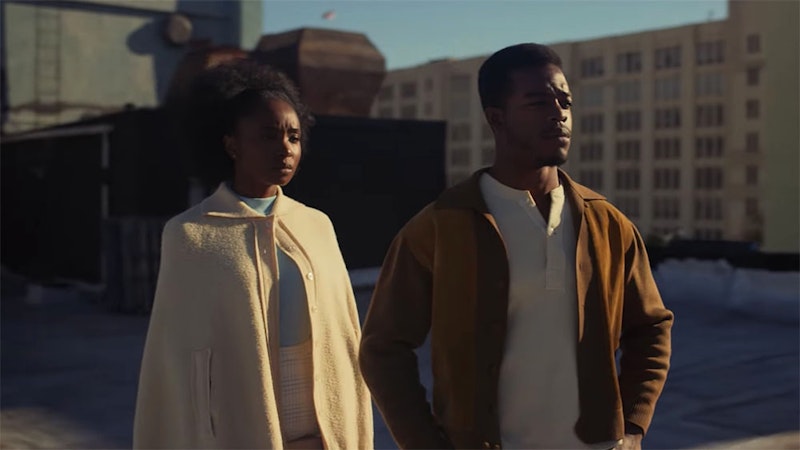 Two years after a Best Picture Oscar win for Moonlight that would’ve been a monumental upset even if another film hadn't been actually announced first, director Barry Jenkins returns with If Beale Street Could Talk. It's another film with a mostly black cast that touches on both great beauty and great tragedy, and further cements Jenkins as one of the most vital voices in cinema today.

If Beale Street Could Talk, which screens Tuesday at the New York Film Festival, is an adaptation of a 1974 novel by James Baldwin. The story combines one of the more charming love stories in recent memory with one of maddening injustice, and doesn’t lead quite where you think it does.

In early 1970s New York City, Fonny and Tish (Stephan James and Kiki Layne, with fantastic chemistry) are young lovers, expecting their first child. But he's heading to prison, for a terrible crime that he didn't commit. The film goes back and forth between telling the past and present of their story. Two things about this film that stand out—the use of a superb cast, comprised mostly of black actors who are either unknown or underused, and a gorgeous visual style. In Moonlight, Jenkins was wondrous with lighting, and he does that again here, once again with an assist from returning cinematographer James Paxton.

An early scene in Beale Street, featuring both main characters' extended families, is such an acting showcase for everyone in the room that it's a shame of these people don't show up again in the movie. Brian Tyree Henry, from the TV show Atlanta, gets a revelatory monologue later on, while the always-great Regina King is in three scenes and aces all of them.

James is best known for playing Jesse Owens in Race, the underwhelming biopic a few years ago, while Layne is nearly a complete unknown. There also great parts for the likes of Michael Beach- a frequent guest star on '90s shows like E.R.- stage mainstay Colman Domingo, and Chi-raq star Teyonah Parris. There's one other scene, in which Dave Franco has a brief cameo as a a landlord who rents the couple an apartment, that's not only very affecting, but upends generations of stereotypes about Jewish landlords.

The movies, belatedly, have done wonderful things with James Baldwin's work, beginning with Raoul Peck's astonishing 2016 documentary I Am Not Your Negro, which had the counterintuitive but masterful idea of having Samuel L. Jackson narrate an unpublished Baldwin manuscript.

With If Beale Street Could Talk, we have the absolute right filmmaker adapting a Baldwin work that's both of its time and resonant today. This is one of the year's best films. A

At a time when a lot of people, from comedians to those morons in the "Intellectual Dark Web" movement, are making careers out of posing as beleaguered victims of censorship, Iranian filmmaker Jafar Panahi has a much stronger claim, in that his government has banned him from filmmaking for 20 years.

A leading light of the Iranian New Wave movement, Panahi made the great Offside, the film from 2006 about a group of girls who dress as boys in order to sneak into Iran's World Cup qualifying match, filmed at the actual match. In recent years Panahi has been increasingly at odds with Iran's regime, which has banished him both from filmmaking and from leaving the country. His 2011 film This is Not a Film was smuggled from Iran to the Cannes Film Festival on a flash drive, hidden inside a cake.

His latest film, 3 Faces, is a tour of the rural Iranian countryside near the country's border with Azerbaijan, and it paints a picture of Iran far different from the one you probably have in mind. In a few years, when we're in the run-up to an invasion of Iran, I may find myself thinking of this film.

3 Faces starts with a central mystery: a cell phone video is shown of a young woman appearing to commit suicide. Panahi and actress Behnaz Jafari, playing versions of themselves, take a road trip in rural Iran to visit the girl's village and investigate.

The mystery isn't ultimately what the film is about—it's resolved about halfway through—but 3 Faces is instead both a character study and a portrait of Iran today, complete with cultural misunderstandings and language barriers. There's also a joke involving a cow that pays off brilliantly. B

Don't know the difference between free jazz and regular jazz? Fire Music, a documentary by Tom Surgal, tells the story of the former, while playing the music wall to wall for its 71-minute running time.

Focusing on the likes of Sun Ra and Ornette Coleman, Surgal's film details the music that emerged from the Lower East Side in the 1950s, an angrier, more grown-up form of jazz than what had been popular up until that point.

Surgal, best known as a music video director, made the film as the result of a years-long Kickstarter campaign. He's open about wanting to give this particular music its due; the film's press notes repeatedly mention how much free jazz was neglected by Ken Burns' turn-of-the-millennium Jazz documentary. There are plenty of surviving participants interviewed as talking heads, although the director said in a recent interview that several of his subjects have died since taping their interviews.

There's plenty in Fire Music for both free jazz aficionados and neophytes, but there’s no doubt this is a doc that gives this music its due. A-