Venom is one of those movies that exists more for corporate rights reasons than anything else. C- 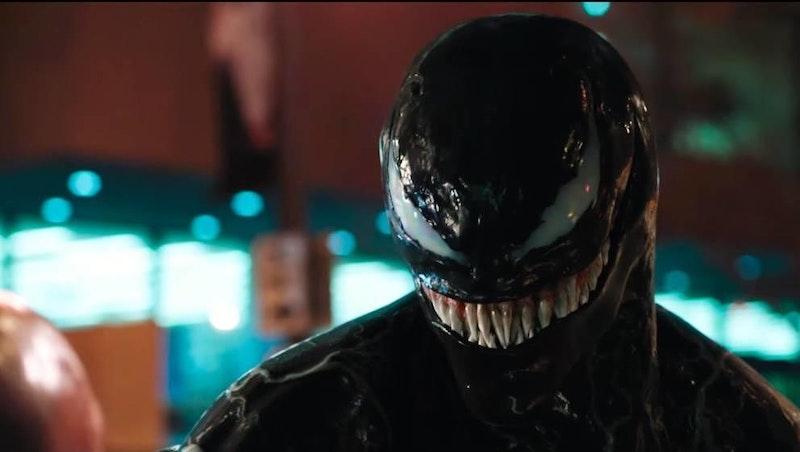 Directed by Ruben Fleischer, who made 2009’s Zombieland and nothing decent since, Venom is one of those action movies in which the CGI looks expensive and everything else looks low-rent. The film's listed running time of 112 minutes is split between 90 minutes of movie and 22 minutes of closing credits, the most lopsided ratio of that kind that I can remember.

Drake's private program has brought some scary alien life forms called symbiotes back from space, and when they merge with human hosts the symbiotes become tall, strong creatures with long tongues, and have to eat constantly. When Eddie gets infected, he becomes hero Venom, who must stop the bad guy, save the world, and get the girl.

The tone is completely wrong. A dead-serious action thriller with elements of body horror for its first half hour, Venom then suddenly becomes a buddy comedy, with Hardy doing the voices of both himself and the alien. It's never very funny, and it's unclear why the alien would arrive on Earth and then instantly develop the persona of a wisecracking, but not especially talented stand-up comedian. Beyond that, Venom fails at building a world that’s in any way worth caring about.

Most of the early reviews have been of the “It's not good, but at least Hardy is good" variety, but I disagree—the character is a blank buffoon, hidden much of the time by expensive but still unimpressive CGI. Williams has done better, and the Ahmed character is an even bigger missed opportunity. There are a lot of ways to go when it comes to satirizing Elon Musk, and this film leaves them all on the table. Armie Hammer's monstrous Silicon Valley chief executive in Sorry to Bother You was a much better creation.

Even Reid Scott, so riveting as a loathsome douchebag on Veep, is given almost nothing to do as a doctor and romantic rival. And while Jenny Slate is always welcome, she's hardly in the movie.

The film's understanding of journalism and corporate whistle-blowing are also poor. Brock, as a reporter, meets with an anonymous source on a public, crowded street in the middle of a city, while also contacting that source over unencrypted text messages.

Venom is filmed choppily and incoherently, with Fleischer among the growing group of filmmakers who believes that what every action sequence needs is a lot of flashing lights. There's also a car chase scene through San Francisco that won't make anyone forget Bullitt, or even The Rock.

Venom is one of those movies that exists more for corporate rights reasons than anything else. Venom is a longtime comic book character from the Spider-Man wing of Marvel; you may remember the character (played by Topher Grace) as one of the triumvirate of villains in the third (and worst) of the Sam Raimi Spider-Man films. A corporate deal a couple of years ago brought Spider-Man into the main, Disney-owned Marvel universe, although Sony retained the rights to a bunch of Spider-Man-adjacent characters, Venom among them (they also get to make Spider-Man cartoon movies, with the first one arriving in December.)

Venom doesn't mark an auspicious start to the latest cinematic universe of superheroes.