Paranormal Activity is a rape/revenge film. 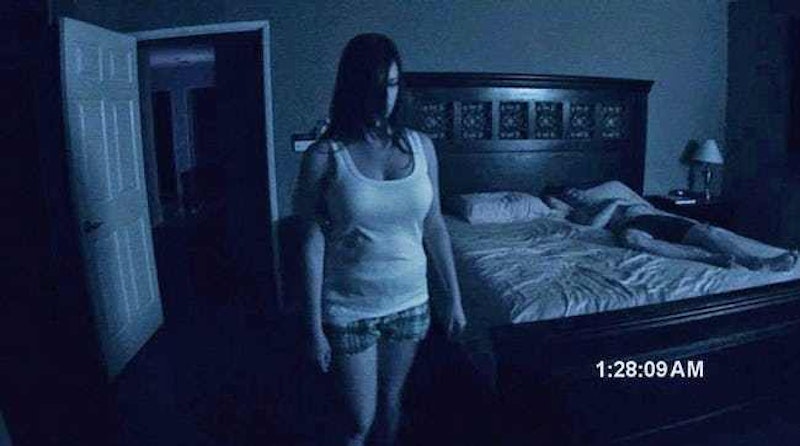 This is part of a series on Blumhouse horror films. The last entry on Unfriended is here.

The 2007 film Paranormal Activity is by some measures the most profitable film ever made. It generated a box office of $193 million with a budget of $350,000, and launched Blumhouse as a low-fi horror powerhouse. The movie’s been praised for its use of "found footage"—like the Blair Witch Project, the conceit is that everything you see on screen is recorded by the characters on their hand-held video camera. The real genius of the film, though, is in its clever shuffling of horror genres. The movie presents itself as a supernatural ghost story, but as it goes along it reveals that its actual genre is rape/revenge.

Rape/revenge films have an elegant simplicity, and Paranormal Activity is no exception. Day trader Micah (Micah Sloat) starts recording events at home to see if he can get video evidence of the paranormal activity that has plagued his girlfriend, English-teacher-in-training Katie (Katie Featherstone) for much of her life. Over a period of about two and half weeks, the supernatural incidents get worse and worse—doors open, noises bang, a Ouija board lights on fire, Katie sleep walks and loses time. In a virtuoso no-effects scene, she's pulled out of her bed and dragged down the hall by an unseen force.

The demonic happenings are genuinely creepy. A sequence where the camera set up in the bedroom captures Katie in the middle of the night crawling out of bed and simply standing there for hours, barely moving as the timer races forward, is especially effective. The movie gets enormous mileage out of small, barely noticeable details—a door opening by itself, covers stirred by a breeze from nowhere, a chandelier swinging.

Even more horrifying than the demonic manifestations is the relationship dynamic between Katie and Micah. The red flags go up early as Micah follows Katie around with the camera, pushing her to have sex with him on tape. At one point he lies to her to try to make her think the camera is off, though she doesn't fall for it.

The boundary violations get worse. Sloat, mostly off camera, gives a masterful, repulsively irritating performance as Micah, his every whiny reassurance and swaggering boast dripping with smug self-regard. Katie has had the demon following her around, on and off, since she was eight; she’s terrified by it, and just wants it to stop. Micah, though, is fascinated by the idea of getting Katie's demon on video, and communicating with it. He tries to get Katie to summon it; when she resists, he gets a Ouija board, even though he promised her he wouldn't. He bullies her by appealing to her guilt, telling her that she didn't tell him soon enough in their relationship about being possessed, and so he should be the one who says how they deal with the haunting. Under stress, he even blames her for bringing the demon into their home—even though it's his actions that have brought them to a crisis.

"I've been doing my research. I'm taking care of this. Nobody comes in my house, fucks with my girlfriend, and gets away with it," he boasts, in frat-guy pissing on his territory mode. He's supposedly talking about the demon. But he's obviously also appealing to the psychic Katie calls, Dr. Fredrichs, and the demonologist the psychic recommends. Micah and the demon are in league; in a lot of ways, the demon is Micah. When the psychic comes by for a second time, he declares there's great hostility towards him in the house. That's the demon that wants to get rid of him—but it's also Micah.

The demon doesn't want Katie to get help, and Micah doesn't either. They want to isolate Katie, manipulate her, and use her. When Katie screams in fear at one point, Micah grabs the camera before coming to her aid; like the demon, he finds her fear and discomfort fascinating, interesting and pleasurable. "I feel it watching me!" Katie says in panic towards the end of the film, into the camera that Micah is still shoving in her face.

The demon is a metaphor for Micah's toxic masculinity. As in all rape/revenge films, though, that’s is a double-edged knife. Micah wants to control Katie by filming her and her demon. Yet it's increasingly clear that he’s out of his depth, as Katie informs him. "You're not in control. It is in control, and if you think you're in control, then you're being an idiot! Not a single thing you've done has helped." He stutters in protest as she declares, "You are absolutely powerless."

Katie’s verbally attacking Micah's manhood; in short order she moves from words to actions. In the climax of the film, the camera catches Katie climbing out of bed and standing over Micah again for hours, swaying slowly back and forth as the clock races ahead. She then leaves the room, and you hear a terrified scream from downstairs. Micah leaps out of bed and races to find her. He emits a surprised yell, and then Katie, clearly possessed, comes back upstairs holding his bloody body. The last image of the film shows her with an ugly smile, leaning into the camera lens before she smashes it.

Rape/revenge narratives are about the perpetuation of violence; one cruel act begets another. The demon in Paranormal Activity embodies (or disembodies) that dynamic. By bullying Katie, Micah turns her into the bully. He wants to summon the demon, and so he does; his selfishness and abusiveness rob the person he's abusing of her humanity.

That's horror. But the blade descending into its preordained place also makes a satisfyingly wet thump. Two-thirds of the way through the film, you want the insufferable Micah and his whining and his unsteady camera to suffer some horrible fate—and there's a kind of dawning joy as you realize, yes, that’ll happen. The nameless demon is revenge. Its smile is ugly, but it's satisfying as well.