In Unfriended, online bullying is both crime and punishment. 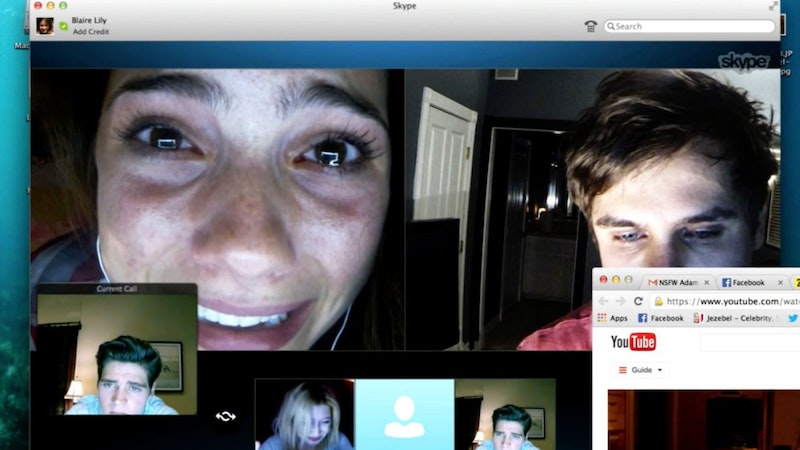 This is part of a series on Blumhouse horror films. The last entry on Upgrade is here.

Director Levan Gabriadze builds the film around a clever found footage conceit. The entire movie (save for the last shot or two) is a view of the computer screen of protagonist Blaire Lily (Shelley Hennig.) Blaire's a high school cool kid with an obsessively online group of friends. They're always Skyping and texting, so the movie is an hour and a half of shaky computer camera images of her and her five friends chatting as they become increasingly panicked and desperate in the face of supernatural horror.

That horror is Laura Barns (Heather Sossaman), a close friend of Blaire's who committed suicide after someone posted an embarrassing video of her engaging in sexual activity, passing out, and soiling herself. The movie takes place on the one-year anniversary of her death. Blaire gets mysterious messages from Laura's Facebook account, and an anonymous troll joins her Skype calls. The troll starts to reveal secrets about each of the friends—Blaire cheated on her boyfriend Mitch (Moses Jacob Storm) with his best friend Adam (Will Peltz); Jess (Renee Olstead) spread a rumor that Blaire was anorexic. Eventually the troll reveals itself to be Laura's ghost, which possesses each of the characters in turn and forces them to commit suicide. With a blender, improbably, in the case of Ken (Jacob Wysocki.)

The inevitable ultimate secret the friends all share is that they participated in the online bullying which led to Laura's death. Mark Dujsik at RogerEbert.com interpreted this as meaning that the film "has a message: Cyber-bullying is bad." He added, "Unfriended is, one supposes, partially an overblown attempt to scare people straight about that despicable trend."

The self-referential implications are laid out in the very first scene, when Blaire and Mitch engage in some cybersex. Mitch urges Blaire to take off her shirt and show him her panties; at her kinky suggestion he picks up a knife and says he'll cut her if she doesn't strip. The camera wavers and wobbles and doesn't quite show you what you're obviously (with Mitch) supposed to want to see. Then, suddenly, the exposure becomes public—all of Mitch and Blaire's friends somehow join the chat, forcing them to scramble and cover up.

We learn eventually that it's Laura who answered the group call and allowed everyone to interrupt Mitch and Blaire. Her ghost is doing to them what was done to her; making embarrassing sexual video public. The punishment fits the crime—which is the cathartic promise of slashers, and for that matter of cyberbullying. Mitch nastily insists that Laura was a crappy person who deserved what she got, and by saying that he reveals himself to be a nasty person who deserves what he gets.

Dujsik dislikes Unfriended in part because all the characters are unpleasant people. But in slashers, unlikable victims are a feature, not a bug. The genre urges you to cheer the arc of the righteous scythe. Slashers are related to rape/revenge movies because both are built around the logic of doing unto others. The evil antagonist violates his victims, and then in the final act the victims pick up the edged or blunt instrument, and violate him (or her) right back. You become the violent, sadistic thing you hate. That's not so much a tragedy as a rush.

Unfriended, with low-budget economy, makes the identity between victim and victimizer explicit. All the friends are engaged in torturing each other; therefore it makes sense they should be punished by torturing themselves. Mitch used his knife to joke about raping Blaire; Laura makes him stab himself in the eye with it. Jess, who spreads rumors and lies, chokes to death on her own hair curler, stopping her mouth forever. Adam, the philanderer, shoots himself with that trusty weapon, the gun as phallic symbol. Laura punishes them by possessing them and making them do what they've already done.

This is certainly the case for Blaire. The final revelation of the film is that Mitch took the video of Laura and uploaded it. Blaire was there, snickering and egging him on. Laura's ghost has her revenge by uploading the full video, which shows Laura's prone form, and Blaire turning to the camera and smirking at the prospect of destroying her friend's life. Everyone sees what a horrible person Blaire is, and you see the moralistic comments start popping up on the YouTube page. The bully becomes the bullied.

Mitch and Blaire aren't just bully and bullied, though; they're also filmmakers and filmed. The Internet has given everyone the power to be his or her own moviemakers and distributors. We can all be in a low-budget, skuzzy, vindictive horror movie, tormenting each other for cheap pleasures. It's a kind of hell—not least because, in hell, there's the satisfaction of knowing that we all get what we deserve.