The Contemptuous and Racist Dirty Harry

A fascism that dare not speak its name. 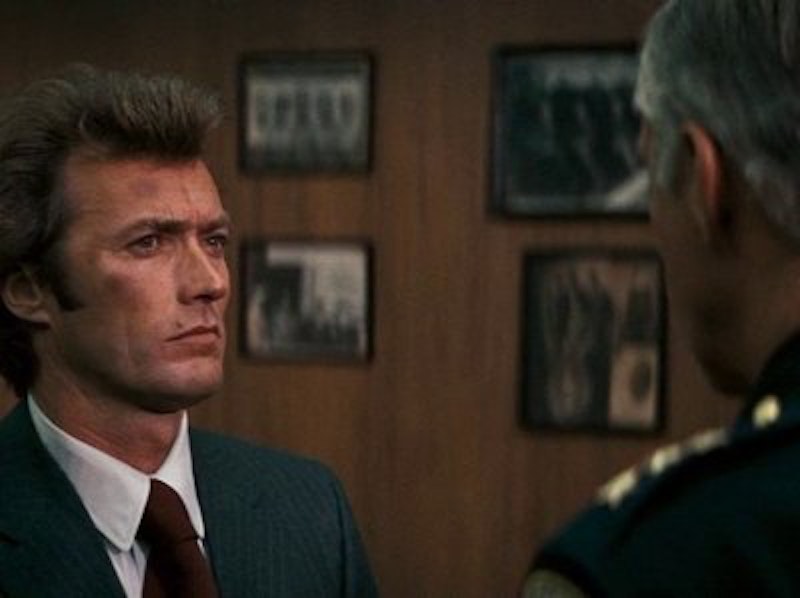 This is part of a series on fascism in film. The previous entry, on 1984, is here.

Pauline Kael and Roger Ebert both argued that Dirty Harry is fascist propaganda, and it's a fair cop. Don Siegel's 1971 film is set in a seedy San Francisco, infested with crime and homosexuals. The only hope is Clint Eastwood as the looming Harry Callahan, who stalks the streets wielding an enormous gun/phallic symbol, the better to clean the city of filth. The glorification of authoritarian, unaccountable violence, inflicted by righteous white men against gutter slime and deviants, is at the heart of American pulp fiction from westerns through superheroes. But it's rarely expressed with such naked enthusiasm as in Dirty Harry.

Make no mistake, Dirty Harry revels in the brutalization of black people. The most iconic moment of the film is Eastwood standing over a badly injured black bank robber, taunting him as he contemplates going for his gun. "’Did he fire six shots or only five'? Well to tell you the truth, in all this excitement, I kind of lost track myself. But being that this is a .44 Magnum, the most powerful handgun in the world, and would blow your head clean off, you've got to ask yourself one question: 'Do I feel lucky?' Well do ya, punk?’"

The punk doesn’t feel lucky, but even when he surrenders his humiliation is not complete. "Wait," he says as Harry turns away. "I gots to know!" Harry, for his part, points his gun at the guy's head and squeezes the trigger. There's no bullet… but of course legitimately threatening to kill an injured, helpless man is a form of torture and police brutality. Yet the viewer is supposed to cheer for Harry, not least because he is white. The scriptwriter's use of exaggerated black vernacular ("gots to") is intentional and contemptuous. It's meant to paint the black victim as both stupid and debased, a sub-human whose mistreatment is not a violation of human rights, but an amusing diversion.

Immediately after Harry and the scriptwriter torture and mock a black man, the scene switches to a hospital, where a black doctor treats Harry for an injury. The two are old friends; the black doctor specifically talks about how he and Harry are buddies from the old neighborhood and have to stick together. The scene might as well be subtitled, "Harry Callahan isn't racist; he's got a black friend!"

Harry also has a Mexican friend. Shortly after the bank robbery, Harry’s teamed with partner Chico Gonzalez (Reni Santoni), who’s there mostly to allow Harry to make a joke about "spics" and show that Harry isn't prejudiced, really, because how can he be when his partner is Hispanic? Harry orders Chico around and looks in on him after he gets shot, commiserating with his loyal second-banana Tonto, while reiterating, over and over, that Chico was never cut out to be the Lone Ranger.

If Harry is carefully presented as the friend of people of color, the villain is just as carefully presented as their enemy. The evil serial killer Scorpio (Andy Robinson) targets black people—and in one case, a black, gay person. In The Eternal Jew, there's no pretense that Hitler is trying to help Jewish people; the Jews are the conniving, evil enemy. But in Dirty Harry, authoritarian violence is supposedly a boon to the marginalized.

Some have argued that the film doesn't look precisely like The Eternal Jew because Dirty Harry isn't actually fascist propaganda at all. "People even said I was a racist because I shot black bank robbers at the beginning of Dirty Harry," Eastwood scoffed in a 1976 interview. "Well, shit, blacks rob banks, too. This film gave four black stunt men work. Nobody talked about that."

Black people do sometimes rob banks, and black stuntmen need work, but none of that quite addresses the point, which is that black people are stereotyped as criminals, and that in real life that stereotyping leads to and justifies horrific police violence. Yet it's significant that Eastwood, and the film, are dedicated to not addressing the point in this way. Fascism always lies, but there's a line between the outright falsehoods of The Eternal Jew and Dirty Harry's more cautious evasions. Dirty Harry, the cop, is a hero because he tells it like it is, supposedly. But Dirty Harry the film, hedges.

The excuses in the film for the treatment of race are interestingly mirrored in the excuses for the treatment of misogyny. The film has gratuitous nudity, all framed through the male gaze. Women barely appear in the film except as bodies watched unaware by men. The first scene of the film shows a young, attractive women swimming in a rooftop pool, watched by Scorpio through a rifle scope before he shoots her. Later, Harry watches a Mexican woman disrobe through a window as part of a (as it turns out) misguided surveillance. Later, Harry accidentally sees the beginnings of what appears to be a hippie orgy through his binoculars. Towards the conclusion of the film, the camera lingers on a completely nude young woman's corpse, Scorpio's victim, as it’s retrieved by the police.

Scorpio and Harry are in theory enemies. One is a sadistic killer and rapist, the other tries to rescue people. But they, and the film, conspire together to provide stimulating images of women for the viewers' pleasure. Scorpio's deviance and evil intent supposedly contrast with Harry's innocent, accidental peeping. But the truth is that hero and villain share the same gaze; their view of women as sexualized objects and as naked, helpless victims is collaborative.

The fascism and the racism are collaborative too. Scorpio is a justification for Eastwood's violence; he's an unstoppable killer, who uses the namby-pamby rules to perpetrate his evil crimes. He’s the weak, decadent, malevolent, lisping sexual deviant that Eastwood must destroy. But he's also the film's furtive id. He giggles at the prospect of shooting a gay black man, and he's the one who gets to write “nigger,” giving voice to Eastwood's rampage against the bank robbers.

Scorpio's own relationship to race is deliberately muddy. It's suggested he's a white supremacist, since he targets black people. There's an odd scene in which he hires a black man to beat him up in order to cast blame on Harry, exploiting racial animosity and black violence to undermine bleeding heart liberal institutions. And then, at the end of the film, Harry delivers the same speech to Scorpio as he delivered to the black bank robber—"Do you feel lucky, punk?" When he shoots Scorpio, the villain falls into the river, sinking in blood—much like the woman Scorpio shot at the beginning of the film.

Scorpio is a feminized monster who kills women, and a monster who kills black people. The film projects onto him its disgust with everything non-white, non-male, and non-heterosexual. The fascist hero can strike down first the black criminal and then the racist with no contradiction, because the black criminal and the racist are, in the logic of the film, one and the same.

Scorpio helps explain the popularity of the "black people are the real racists" meme. The good guys can peep into windows without consent, use racial slurs and torture criminals because they’re the good guys. Fascists in America are in general not quite ready to pull the trigger and call themselves fascist. They call themselves justice instead.